My ears began to pop as the elevator made it's way up to a staggering 880 feet above sea level. Normally, I am not one to be afraid of heights, but as we approached the top I began to second guess what we were about to do. But it has to be completely safe... right? I mean, surely the glass is sturdy enough to hold me and my almost 300 pound wheelchair. I sure hoped so, because if not, I was about to be splattered into a million little pieces on the streets of Sydney. This adventure is known as the Sydney Tower SKYWALK. 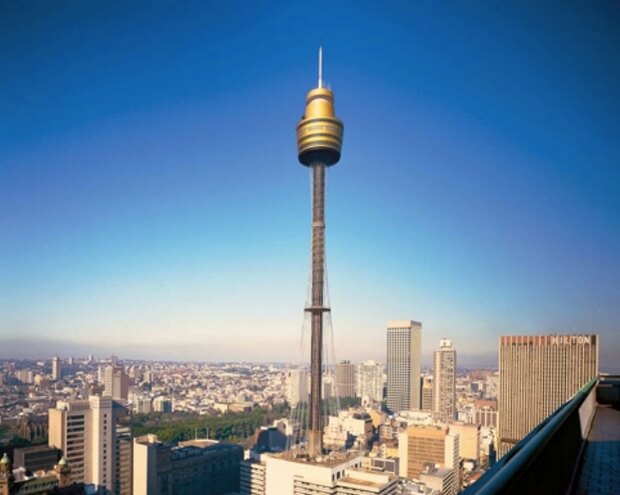 The Sydney Tower hovers high above the city, noticeably sticking out from every angle.

Before going on the SKYWALK however, we met with our guide, Emma, who explained what exactly we were going to do that day and gave us our jumpsuits to put on. Emma said that we would take another small elevator up to the Skywalk and we would be harnessed to the railing that goes around the outdoor platform, so there was no need to worry about safety. This made me feel a lot better about embarking on our adventure. Next, we were given a breathalyzer test (we passed) and signed some waivers, which pretty much said that they were not liable if we were harmed and/or died. I kept telling myself that all was going to be okay. We soon slipped on our jumpsuits (for wheelchair users, it's only a top piece so it's easy to put on) and made our way into the tiniest elevator of all time, but luckily it was exactly large enough to hold my mom, our guide Emma and I.

As we exited the elevator, there was a wheelchair lift waiting to carry me to the SKYWALK area outside. It was a short ride to the top and spectacular views awaited. We were immediately guided to the glass bottom platform to take in the breathtaking views of Sydney. I really don't throw around the word "breathtaking" a lot, but this really was. Sydney is already one of the most beautiful cities in the world, but seeing it from 880 feet high put a whole new perspective on things. I also hadn't realized previously how large of a city it is, but from here it looked massive. We did this SKYWALK on our second day in Sydney so this allowed us to get a grasp on where everything is located. Big thanks to Emma for pointing out what all of the buildings below were! She really knew her stuff and even told us some interesting facts about the Sydney Tower Eye and the sights below. For example, the SKYWALK is exactly twice the height of the Harbour Bridge, which is already huge itself. 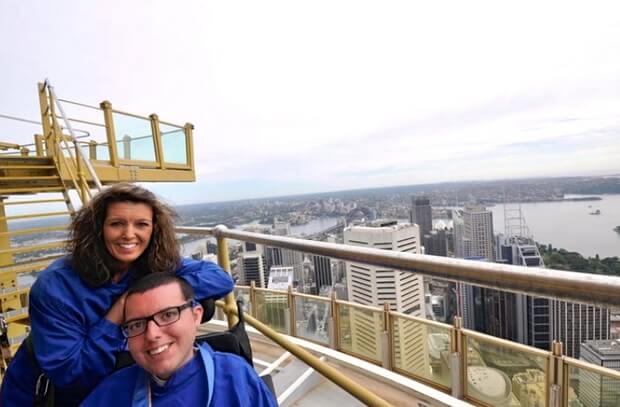 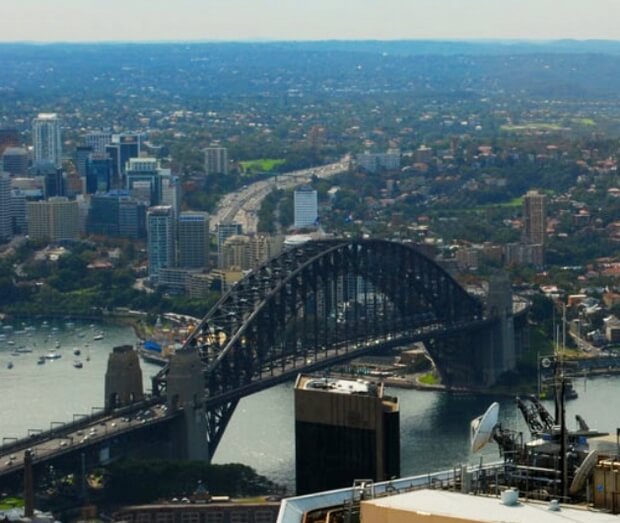 Here’s a view of the Harbour Bridge from the SKYWALK.

After about 45 minutes to an hour of rolling around outside and getting some epic photos taken (from the SKYWALK camera. You are not allowed to take your own), we were ready to go inside to the Tower Eye indoor viewing area. The views from inside are absolutely amazing as well and it's a lot cheaper than doing the whole SKYWALK experience. But if you're in Sydney, why not go all out and do as much as possible? The SKYWALK experience is truly a quintessential Sydney adventure and definitely worth every dollar in my opinion. Plus, the fact that it's completely wheelchair accessible makes it even more awesome. 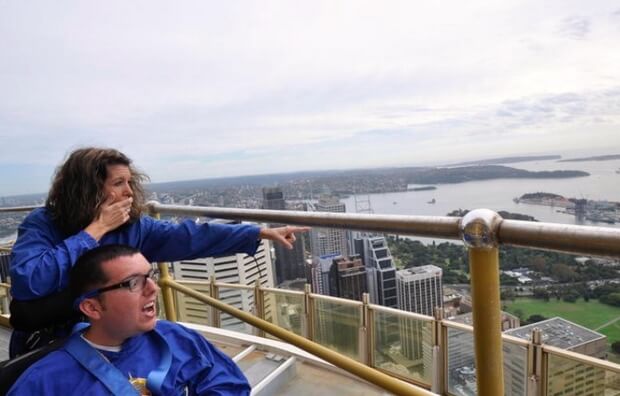 OH MY! Is that a plane coming toward us?!

Looking back on my time in Sydney, the SKYWALK was one of my favorite experiences while there. It was a little bit of adventure mixed with stunning views, and furthered my love affair with Sydney even more... if that's even possible. If you are in Sydney already or are planning a trip down under, put the Sydney Tower Eye SKYWALK near the top of your list of things to do. Trust me - you'll have the time of your life.