How does sampling over a hundred different Coca-Cola products from around the world sound to you? Well, if it sounds like fun then start planning your visit to the World of Coke in Atlanta, Georgia. The World of Coca-Cola is located in downtown Atlanta right across from the Georgia Aquarium. I did both of these terrific attractions on the same day and they took about five or six hours to complete, so plan accordingly as there is a lot to see. The World of Coca-Cola will show you how the company came to be so successful worldwide. I always find it fascinating to discover how businesses succeed… perhaps that’s just the former business major in me coming out.

The World of Coca-Cola building in downtown Atlanta.

I visited on a Saturday and there was quite a wait to get into the World of Coca-Cola, but if you buy your tickets in advance online then you can get in much quicker. I would highly suggest buying tickets ($16 for adults) in advance. After waiting for almost an hour (seriously!) we finally made it inside to the World of Coca-Cola and the first room had all kinds of Coca-Cola artifacts. We saw some of the posters from Coca-Cola’s history, including a poster of Raquel Welch drinking a Coke from the 1980s. After a short presentation from our tour guide about the various artifacts, we went into another room where we watched a short inspirational film called “Moments of Happiness”. It was a remarkable film that showed that Coke has truly been there in some of our happiest times, even if we didn’t realize it. This is totally embarrassing to admit, but I actually almost shed a tear during the film because it was so inspirational (Don’t judge me! Haha). Here is the trailer to “Moments of Happiness”:

Once the film is over, the rest of your visit is a self-guided tour and you can do everything in any order that you want to. The attraction has two levels and most everyone starts on the first level. The first must-do on my agenda was getting a picture with the Coca-Cola polar bear. The line to meet him was pretty long, but it moved rather quickly. Isn’t he a cutie?! Totally worth the wait. 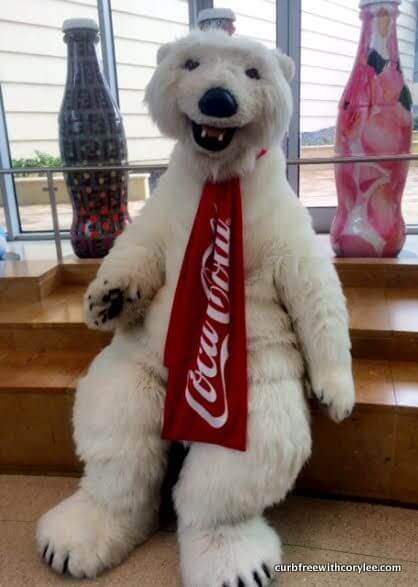 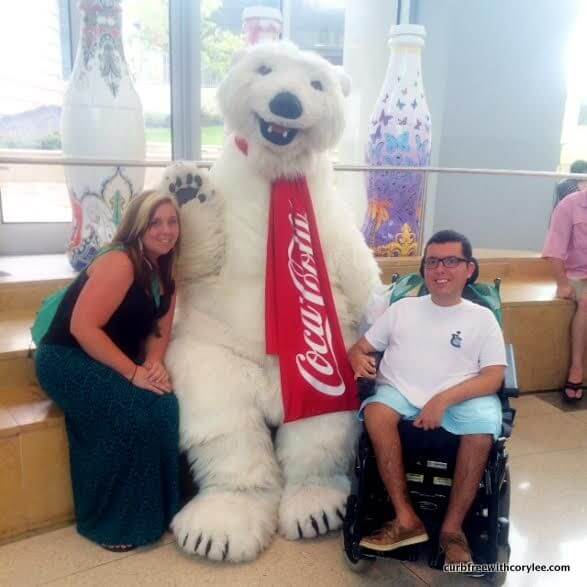 Next up, we went over to The Vault. The Vault is where the secret formula to Coca-Cola is locked away. The formula was invented by Dr. John S. Pemberton in 1886 and has been one of the biggest secrets in the world ever since. Inside The Vault you can view where the formula is locked away and take part in some fun interactive exhibits as well. You can even try to recreate the taste of Coca-Cola with a virtual taste maker.

Other exhibits on the first level included Bottle Works and Milestones of Refreshment. In the Bottle Works exhibit you can view how Coke is bottled. It’s quite a process that they have perfected to a tee and it was really cool to watch. Milestones of Refreshment is a walk-through history of Coca-Cola. There are old Coke bottles, posters, and original recipe notes by Dr. Pemberton. If you’re a Coke aficionado then this will be one of your favorite parts of the attraction since there is so much history to be seen. 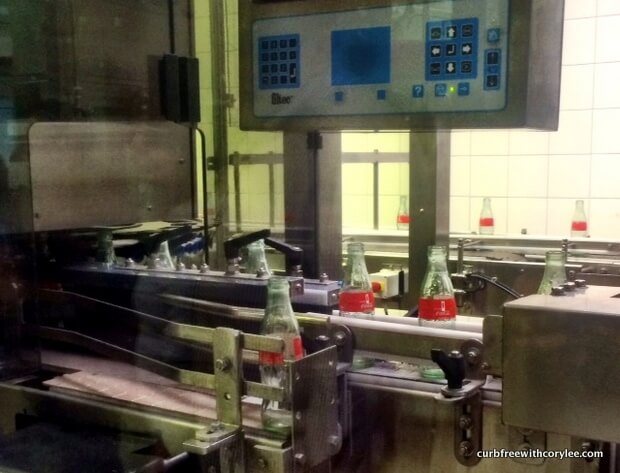 Now that we have explored the first level completely we can venture up to the second level where there are even more exhibits to be experienced. If you are getting off of the elevator on the second level, start out by going to your left to the Secret Formula 4D Theater. This is a 4D film where an eccentric scientist and his assistant try to uncover the secret formula of Coca-Cola. In addition to this being a 3D show, there is also water, wind and various special effects. If you are sitting in a regular seat, then you will also feel the seats move as well. It’s a short and funny film that will have everyone entertained, even though it is predominantly intended for kids most likely.

Another exhibit on this level is the Pop Culture Gallery, where you can see how great Coke’s influence has been on pop culture. This section includes trinkets made from used Coca-Cola cans and bottles and an array of Coca-Cola themed collectible items. Works by artists such as Andy Warhol (one of my personal favorites) are on display as well. 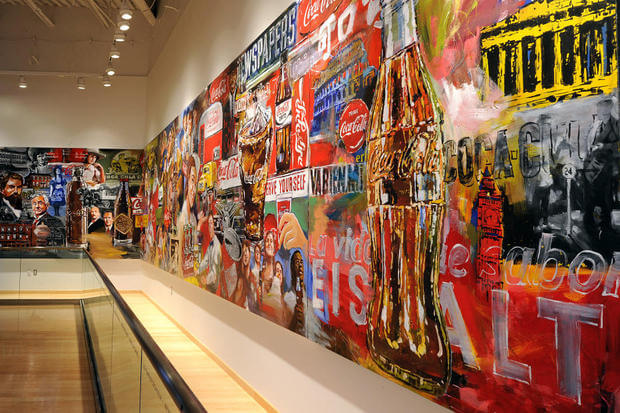 Lastly is the Taste It exhibit. In here you can drink all of the Coke that your heart desires so feel free to drink, lay down and take a nap, and then start drinking again. I always try to drink my money’s worth in this section. The different kinds of Coke are split up by continent. For example, all of the Asian drinks are in one section while all of the European drinks are in another section. As a traveler, I love this because you can go around the world trying different beverages all in one exhibit. How awesome!! Some of the drinks are really good and some of them are very interesting to say the least. My favorite drink was the Melon Frosty Fanta from Thailand. We definitely need to get this in the United States ASAP – deeeelicious! Another one that you should definitely try is the Beverly from Italy. Be sure to come back here and let me know what you think of it afterwards. 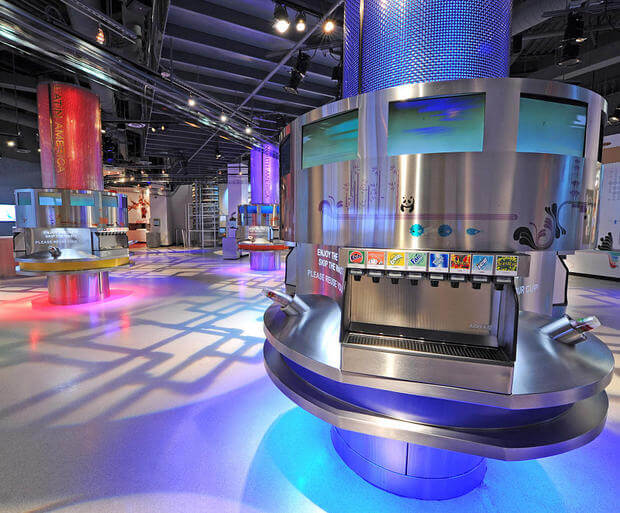 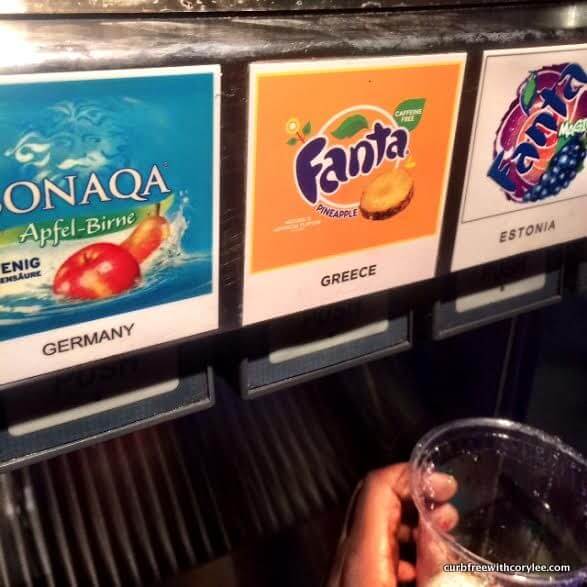 This pineapple Fanta from Greece was pretty yummy also.

At the back of the Taste It exhibit is the exit of the World of Coke. On your way out you will get a complimentary bottled Coke that has a World of Coca Cola label on it. This is really the perfect souvenir to any visit, but if you want even more memorabilia there is a huge (and I do mean HUGE) gift shop as you exit. They have anything and everything that you could possibly imagine, including unique Coca Cola scented t-shirts. If you are visiting the Atlanta area, be sure to drink your own way through the World of Coca Cola. Everything you try may not be tasty, but I can promise that it will be an experience that you won’t soon forget.

*Thank you to the World of Coca Cola for partnering up with Curb Free with Cory Lee and offering complimentary admission.