To be honest, I kind of hate Fall. It marks the end of Summer (which I love!!!) and the beginning of cold weather and the dreaded Winter. However, there are some aspects of Fall that I do like. I love haunted houses, hot cocoa, and the leaves that beautifully change colors. One thing that I’ve always heard about, but never visited, are pumpkin patches. Perhaps I visited one when I was younger, but I have no memory of it. I figured that it was finally time to see what all the hype was about this past weekend so I ventured to Old McDonald’s Farm in Sale Creek, Tennessee. 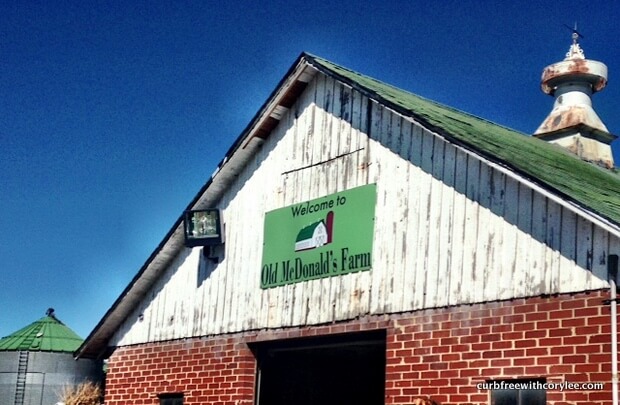 Upon arriving I saw hundreds of vehicles parked in the field. It seemed like everybody and their brother decided to go pumpkin picking on the same day. The farm is so large however, that it never felt overcrowded. After purchasing our tickets ($12 per adult) we were free to wander around and enjoy the farm. The farm has been there since 1821 and has seen eight generations of McDonald’s run it. I could immediately see that this was a family run operation and that they obviously cared a lot about preserving it. 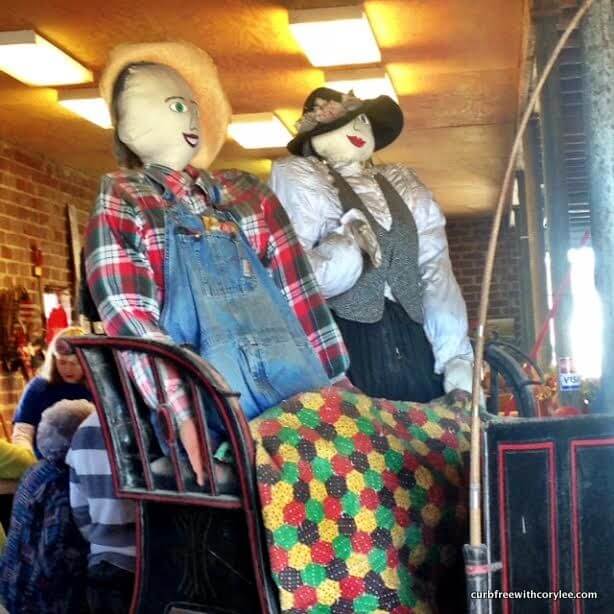 I am a big fan of mazes so naturally, the first place that I went to was the corn maze. Before entering there is a picture hanging up of the layout. I studied it for about a minute, but since the maze is 6.5 acres large it was difficult to memorize. The aisles within the corn maze are pretty wide and it was easy to navigate in a wheelchair. Certain spots were a bit bumpy, but nothing to worry about. After about twenty minutes of twists and turns (and the occasional dead end) I found the exit. This has to be some sort of record. I completed that maze incredibly fast. I swear it isn’t because I cheated by looking at the layout or anything. Haha! 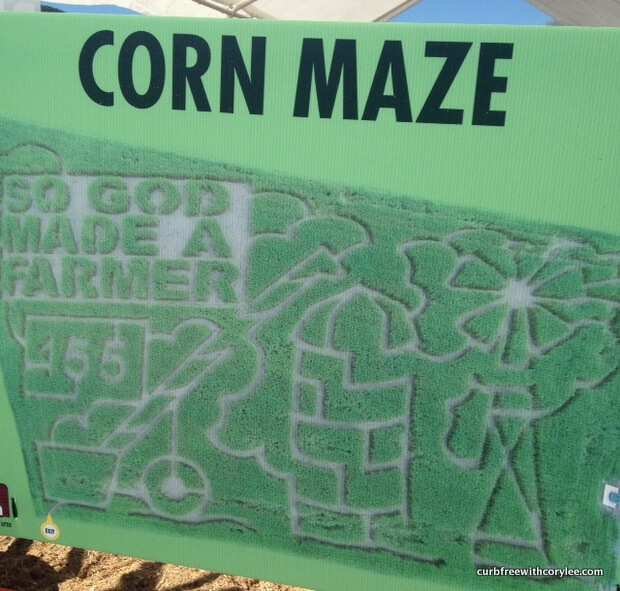 Study this before you go and you might beat my time. 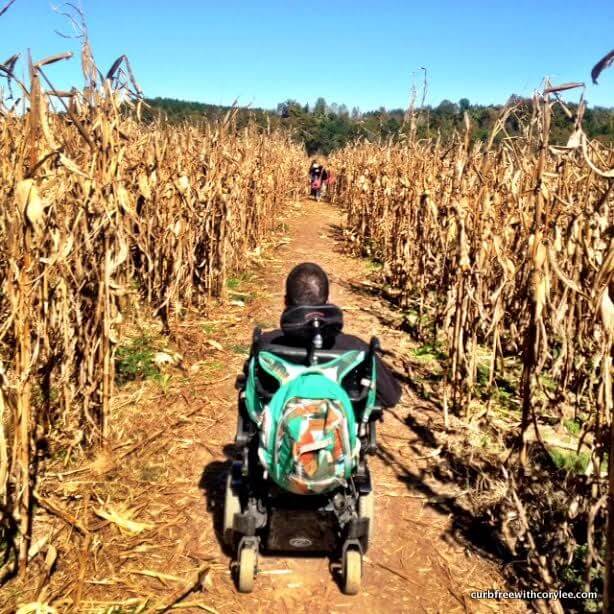 Next up was another maze, the hay maze. This one is only one acre so it is easier to find your way out and would be a better option for children than the corn maze. At one point within the hay maze I came to a set of stairs though so I had to backtrack and exit out of the entrance. I’m not entirely sure if there is an alternate way to get out for wheelchairs, but the stairs are probably the only way. It was still fun though and the stairs didn’t appear until about halfway through (or that’s what I am assuming anyway) so the majority of the hay maze is accessible and worth strolling through in my opinion.

After getting lost in the two mazes, I met some cute little critters in the Critter Barn. There were turkeys, goats, sheep, and more. This area is like a petting zoo and allows you to get very close to the animals. Other areas of the farm included the Corn Crib (basically a giant sandbox filled with corn kernels), the Farm Life Experience (where you can learn how farms work to get food on your table), and the hayride. The hayride will take you to the pumpkin patch, but is not wheelchair accessible. There are tons of pumpkins that you can purchase at the front of the farm however. After scouring them over, I ended up choosing one that weighed 38 pounds. It is a behemoth of a pumpkin (!!!), but they let us use a wagon to roll it to our van luckily. The pumpkins are pretty cheap (I only paid $8 for mine) and I saw many people leaving with more than one pumpkin. One guy left with eight! 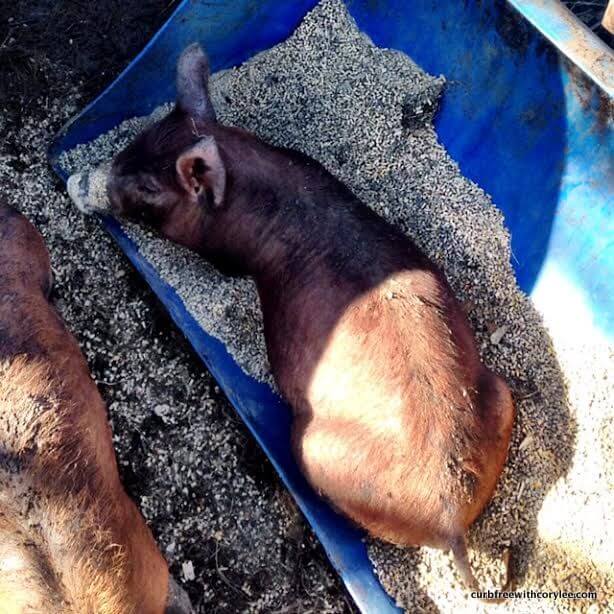 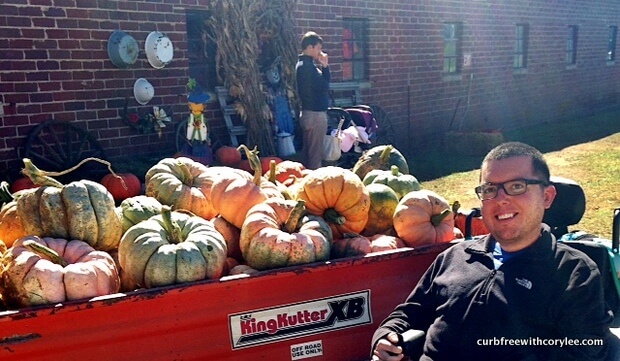 All of the activities that I have mentioned so far are included in the admission price, but there are some additional activities on the farm that have an extra charge. For just $1 you can have three tries with the pumpkin slingshot. I didn’t do this, but I did enjoy watching other people do it. You just put your little pumpkin in the slingshot and watch it go soaring down the field to a variety of targets. Imagine if we could have put my 38 pound pumpkin in the slingshot – now THAT would have been entertaining! You can also try your hand at gem mining ($6) or Farmersgolf ($5).

While this was my first time going to a pumpkin patch, it certainly won’t be my last. It’s easy to spend several hours enjoying all of the fun activities at Old McDonald’s Farm and it actually made me hate Fall a little bit less than I did before going. 😉

Here’s a little bit of farm trivia for you – 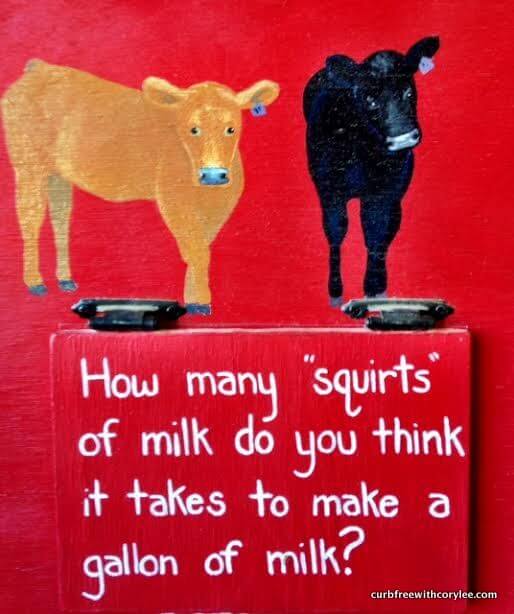 And the answer is… 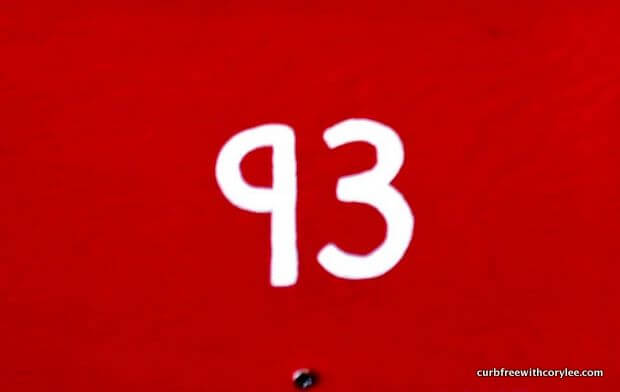