Without the enactment of the Americans with Disabilities Act (ADA), I truly wouldn’t be where I am today. I probably would not even be a college graduate, much less traveling the world and running this blog that you’re reading right now. This civil rights act, known as the ADA, protects people living with disabilities, offering them access to employment, including state and local government programs and services, access to places of public accommodations, such as non-profit service providers, transportation and businesses, and telecommunications. I was born in the same year that the ADA was signed into law so I’ve never really experienced a life without it, but I am still eternally thankful to all those that have made the world a little bit easier for me to explore. 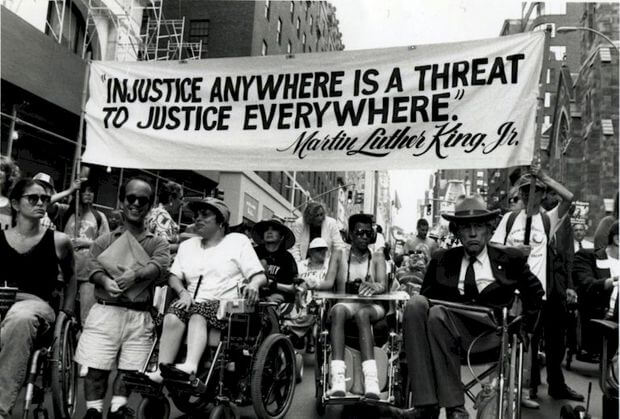 Thanks to people like this, we now have rights.

The ADA law was first enacted in the year 1990 by the U.S. Congress, and signed into law by President George H.W. Bush on July 26th, 1990. This law is the most comprehensive bit of civil rights legislation that outlaws discrimination and safeguards people with disabilities, offering us the same opportunities as everyone else. The ADA is exclusively about equal opportunity from its preliminary to its final provision. Just like other civil rights laws, the Americans with Disabilities Act mandates that Americans be granted equality in pursuing employment, goods and services, as well as various other opportunities.

The Americans with Disabilities Act has profoundly altered how society perceives and accommodates disabled citizens. The universal design of products, public spaces, programs and buildings for usage has been altered in such a way that wheelchair lifts on buses, ramps, curb cuts and other access designs have been incorporated to also include the disabled. Creating an accessible society not only benefits people living with disabilities, but also everyone else in general. For example, curb cuts formulated for wheelchair users are also utilized by delivery people, people with baby carriages, and people on roller blades and skateboards.

Before the ADA law, people with disabilities, especially those in wheelchairs, had a difficult time accessing places or even transportation; imagine a person in a wheelchair trying to go up and down a flight of stairs, or trying to board a bus. It was nearly impossible unless they were carried up the stair case. Today, movement for wheelchair users is much easier. The inclusion of ramps, curb cuts, lifts and various other equipment has greatly improved movement for wheelchair users. We can now even board a plane and travel easier thanks to airlines now having aisle chairs (although I’ll admit that airlines need to step it up a LOT more). Wheelchair users are no longer bound by geographical boundaries due to this act.

Even access lifts on pools and jacuzzis at hotels are now a thing because of the ADA.

Accessible travel is on the rise now more than ever. The travel industry is arising to the special needs of disabled travelers by offering widespread services and substantial accommodation. The ADA guarantees disabled travelers receive the same treatment under the law. However, this may vary depending on the accessibility regulations of a particular country, as the ADA only covers the United States.

The Americans with Disabilities Act will be celebrating its monumental 25th anniversary on July 26th, 2015. The anniversary celebration takes place each year and is celebrated in schools, communities and workplaces. And since this is a pretty big anniversary, I wanted to take this opportunity to celebrate here on my blog with this post. Marking the anniversary, President Barack Obama outlined that the government has commitments to improve education, employment, housing and health policies affecting people with disabilities in America. It is evident that the enactment of the Americans with Disabilities Act has greatly improved the living standards and conditions of people living with disabilities. While much progress has been witnessed over the years, much still remains to be done and I am immensely excited to see an even more accessible world in the near future.

How has the ADA impacted your life?