When I first started planning my trip to Iceland, there were a few things that I really wanted to do; swim in the Blue Lagoon, tour the Golden Circle, and see the Northern Lights. The first two were definitely possible, but the Northern Lights were a big “maybe”. Seeing this natural phenomenon is totally up to chance because the universe has to be working in your favor in order to see them. There can’t be clouds in the sky and it also didn’t help that I was trying to see them in September, which isn’t exactly the prime season. However, Iceland Unlimited (an awesome wheelchair accessible tour company) said that they’d check the weather radar and let me know if seeing the lights would be a possibility during my stay.

On the first day of my time in Iceland, I received an email from Jón Gunnar Benjaminsson, the CEO of Iceland Unlimited and a fellow wheelchair user as well, and he said that seeing the Northern Lights could be possible that same night since the weather looked promising. There was no guarantee that we’d see any activity, but at least there was a likely chance! I got excited at the mere thought that it could happen, but tried not to get my hopes up too high just in case. Who am I kidding?? I was ecstatic and could barely contain myself. Seeing the Northern Lights has been a huge dream of mine as long as I can remember. 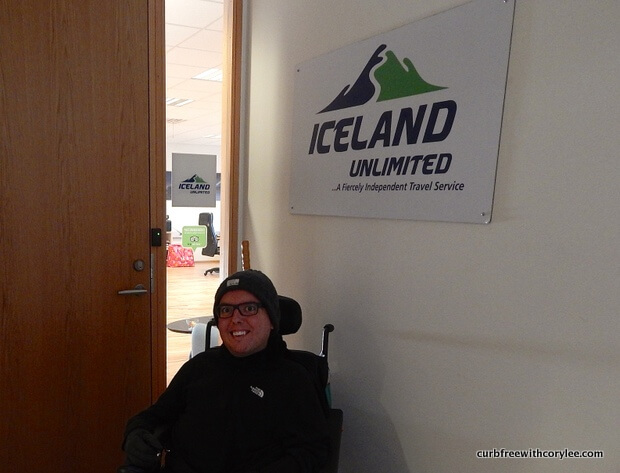 I was able to visit the Iceland Unlimited HQ while in Reykjavik. Truly amazing staff!

Later that night, after relaxing in the Blue Lagoon all day, Kristjan from Iceland Unlimited picked us up from our hotel at around 9pm. He had an accessible van that had a long ramp in the back. After loading, he happily assisted in securing my wheelchair with the tie-downs on the inside of the van to lock me safely in place. Even though I was in the very back of the van, it was easy to see out and take in the surroundings as the windows were quite large.

As soon as we started driving, the skies became a bit cloudy. This isn’t good for Northern Lights hunting, but Kristjan, our driver, said that if we went toward the city maybe the skies would clear up. We headed that way, but didn’t seem to be having any luck so we went to another location outside the city. After driving for a while, we stopped and got out of the van to look for the lights. It wasn’t as cloudy anymore so we had hope that we would see them here. We looked and looked with no luck. After being outside for a while, Kristjan joked that my article about this experience might have to be titled “Drove Around for a While. Saw Nothing” and we then loaded back into the van with disappointment. I’m usually pretty lucky, but it really seemed like we weren’t going to see anything on this night.

Just as we had given up on the thought of seeing the lights and were driving back toward our hotel, there they were. My sister spotted them from the inside of the van as we were driving, but we quickly pulled over to the side of the road and got out so that we could fully take in what was happening. I couldn’t believe my eyes. The Northern Lights were right there in front of me, dancing in the sky. 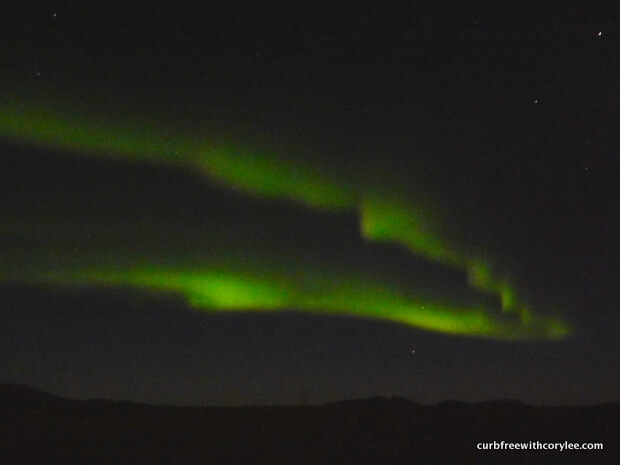 The lights were beautiful and I had long dreamed of seeing them. The feeling that overcame me was similar to the one I had felt in years past upon seeing Niagara Falls for the first time. Breathtaking! This unbelievable display happens when charged particles from the sun strike molecules and atoms in the Earth’s atmosphere, which “excites” the atoms and causes them to light up. Depending on what part of the atmosphere that these molecules excite, they will appear as different colors. Green is the most common color, but on rare days they can also be pink, blue, or white.

They appeared as a white color mostly when we saw them, but when photographed they look green. Unfortunately, my iPhone 6 and GoPro didn’t capture the lights very well. But luckily, my sister brought her DSLR camera and it did a fantastic job. If you are wanting to photograph the lights, I’d highly suggest investing in a good camera. 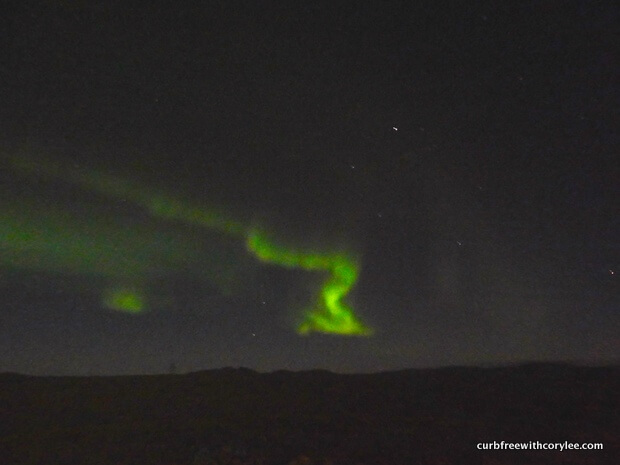 This picture was taken just moments after the previous photo. As you can see, the lights change their formations extremely fast.

It was amazing to see how fast the lights move around and this was my favorite part of the experience. They move incredibly fast and change their shape, but for about an hour they were all over the sky. We had quite a show that I’ll never forget!

*Thanks to Iceland Unlimited for the complimentary tour. All opinions expressed are my own.