Iceland is an older country and with that comes many historical attractions and hotels. As a wheelchair user, this can be an obstacle at times depending on whether or not these places have been renovated. Older buildings usually aren’t very wheelchair friendly, so when I started trying to find a hotel in Reykjavik I was a bit skeptical. I searched around online and eventually stumbled upon the Kvosin Downtown Hotel. It looked to be in a fantastic area and the hotel itself looked beautiful, but would it be accessible? After a couple emails back and forth with the manager, Snorri, I learned that this hotel had everything I could want for a quaint, cozy and accessible stay in Iceland’s capital city. 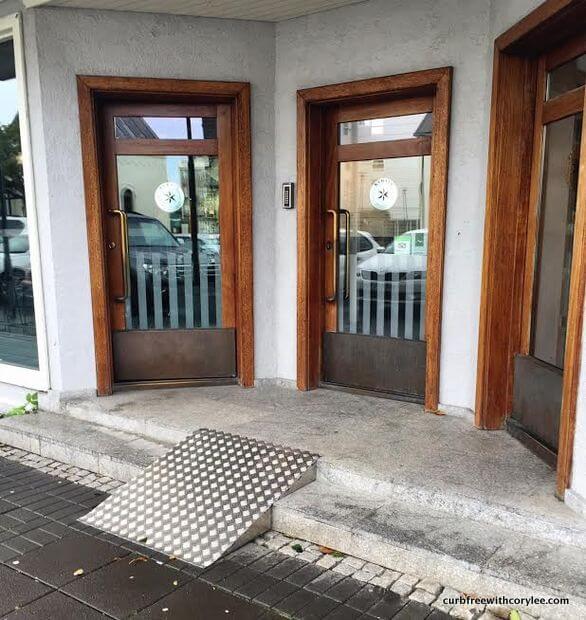 The entrance to the lobby

At the very beginning of our time in Iceland we spent a relaxing couple of days getting over jet lag at the Blue Lagoon, but then wanted to experience downtown Reykjavik in all its glory so we checked into the Kvosin Downtown Hotel. The entrance to the lobby wasn’t accessible just a few weeks ago, as there are a few stairs at the entrance. However, exactly one day before my arrival they put up a ramp. Woohoo!! It’s a bit steep, but wasn’t a problem for my powered wheelchair and a manual chair could get up it with a little push I’m sure. The hotel has wanted a ramp for a long time, but the city of Reykjavik owns the sidewalk and simply wouldn’t allow it. Apparently, this is the case at many of the shops and restaurants that don’t have a ramp to get inside. Accessibility in Reykjavik is improving though, and I was able to access almost everywhere that I wanted.

The lobby area is very nice and they have some drinks, food, and gifts for sale. The selection of items was unique and included things that I didn’t see in any of the regular souvenir shops in downtown. Of course, common things such as Iceland’s superfood Skyr were also available. There is a bar named Klaustur Downtown Bar connected to the lobby that serves wine, cocktails and beer. It’s open every evening and there is a happy hour if you’re looking to save a bit of cash. 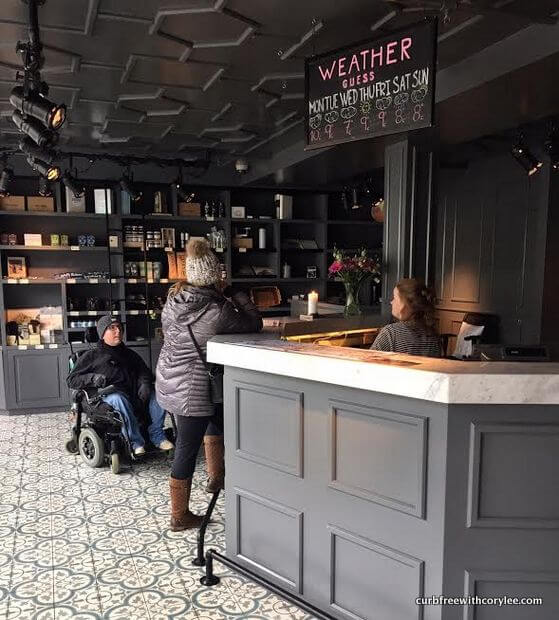 Hanging out in the lobby

The staff is on hand in the lobby 24/7 and they are extremely friendly and helpful. Any time that we had a question about anything or needed an accessible taxi called for us, they were there to assist with a smile on their face. The entire staff was some of the best that I’ve ever encountered… and I’ve encountered a LOT, trust me.

Aside from the staff, lobby and bar, the rooms are exceptional as well. There are only 24 rooms in the entire hotel so they really pay attention to every detail. Most of the rooms are actually more like full apartments, so you’ll have plenty of space to unwind while in Reykjavik.

There is one wheelchair accessible room and this is where I stayed. The accessible room is called the “Pippa’s Wish” room in honor of the incredible Pippa, a young girl from Missouri who happens to have cerebral palsy and Lennox-Gastaut Syndrome (a form of epilepsy). Pippa’s big dream was to visit Iceland and her family and friends made it happen with the help of various companies in Iceland, including the Kvosin Downtown Hotel. It was an honor to stay in this room that is named after such an awesome girl! 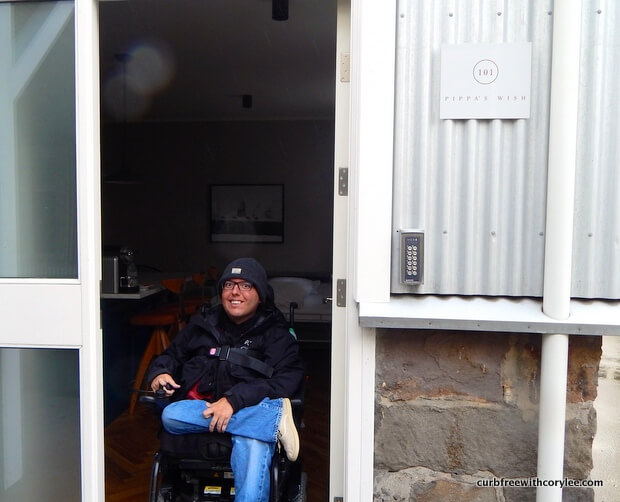 Our room had a double bed and a pull out sofa bed, so it can easily sleep 3 or maybe even 4 people. The double bed was insanely comfortable and I slept like a baby all four nights that I was there. There is also a flat screen television, a refrigerator, a range top cooking surface, and a Nespresso coffee machine, which I took advantage of many times. I also really liked that there was an island in the living/kitchen area because it made for a great spot to use my laptop and work. Being a travel blogger isn’t all fun and games, ya know? Haha! 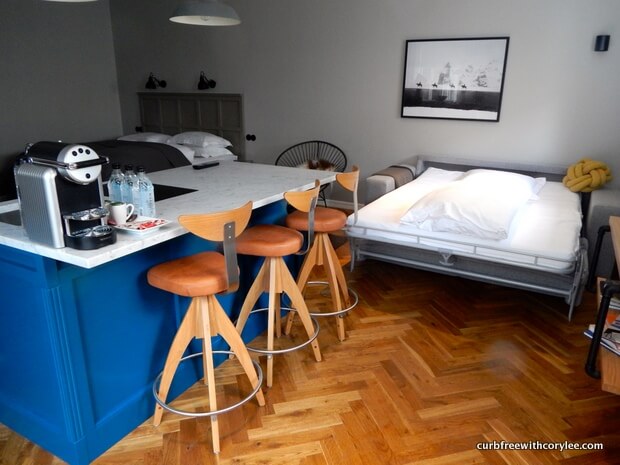 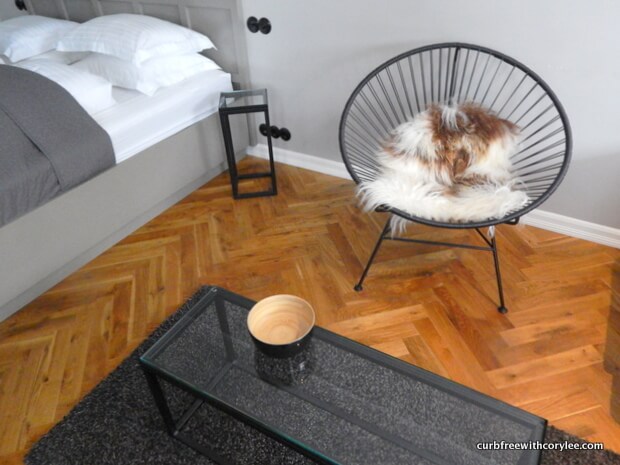 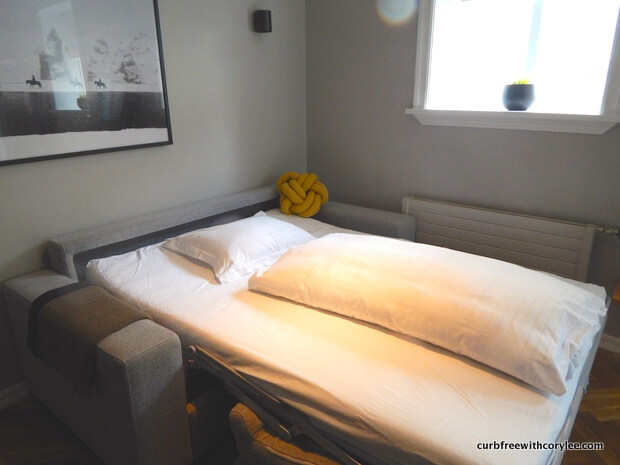 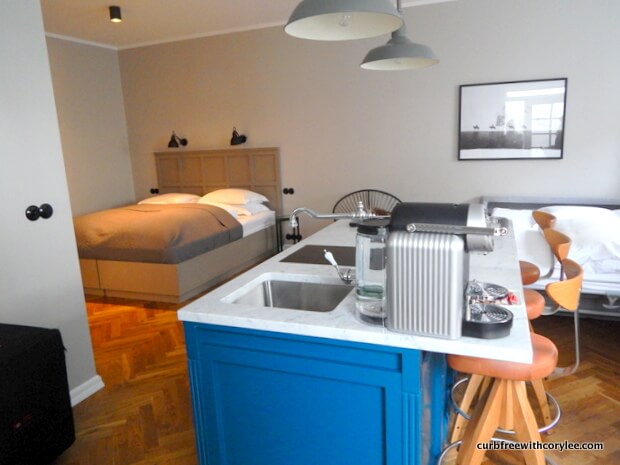 The bathroom was large and had plenty of space for my Goes Anywhere shower chair to wheel in and out. I loved the roll-in shower with the complimentary Aveda products. They all smelled so good and it’s rare to find such high quality products in a hotel’s bathroom. 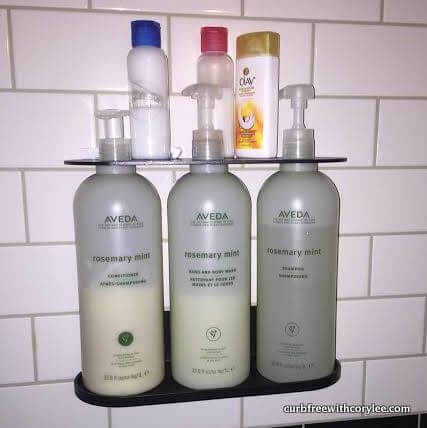 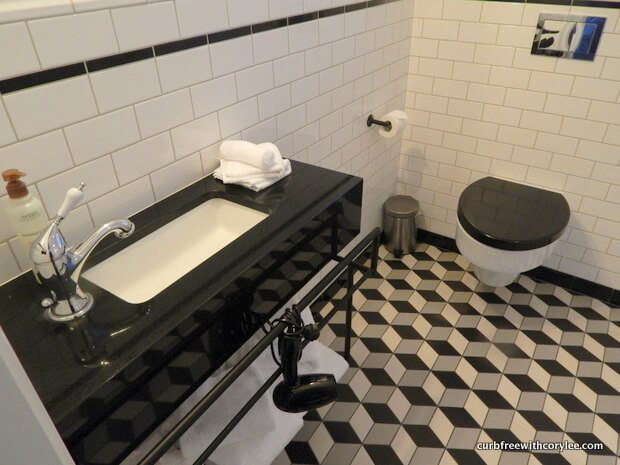 What’s better than complimentary breakfast? Nothing!! Especially the one at Bergsson Mathús! This is one of Reykjavik’s top breakfast spots and the restaurant actually joins the Kvosin and was just steps from our room. As a guest of the hotel, you get complimentary breakfast to jumpstart your day! Each morning we were served a well balanced breakfast of bread, cheese, soft boiled egg, yogurt with granola, fresh fruit and meat. I’m not a big meat eater so I got fried potatoes instead of the meat, which was delicious. We also had our choice of coffee, apple juice or orange juice. It was a fantastic way to start every morning in Reykjavik and I guarantee that you won’t find a better breakfast in the city. Yum! 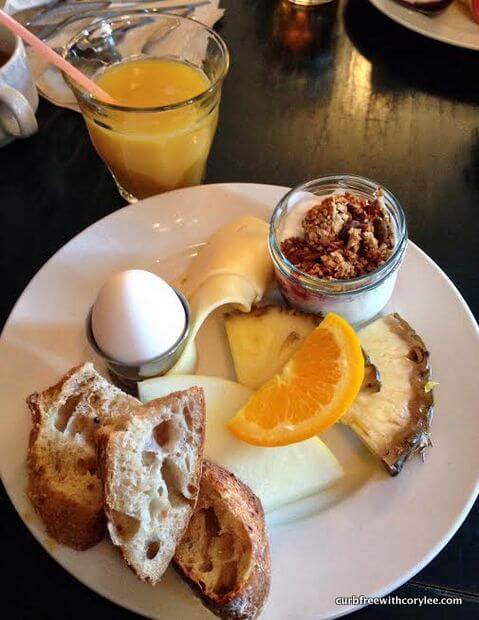 Over the years I’ve stayed in many hotels, but after a while they all kind of just blend together and I don’t really remember them that well. I am certain that the Kvosin Downtown Hotel will not fall into that category. I’ll always remember the place that made my time in Reykjavik so wonderful. It’s quaint, cozy and perfect… with some of the friendliest staff that you’ll ever meet! I can’t wait to be checking back in to the Kvosin when I’m back in Reykjavik, whenever that may be. 🙂

*While my stay at the Kvosin Downtown Hotel was complimentary, all opinions expressed are my own. It really is just that amazing!

*A Note from Curb Free with Cory Lee: This post includes affiliate links. When you click on a link, I may receive a small compensation, which will help this blog grow into a better resource for disabled travelers.