As an extremely popular vacation destination in the Southeastern U.S., Gulf Shores and Orange Beach certainly have no shortage of things to do, places to eat, or places to stay. In fact, there are so many condos and hotels in the area that it can feel a little overwhelming when you are trying to find the perfect one. During my recent trip to the Alabama Gulf Coast, I stayed at the Hilton Garden Inn Orange Beach and had a wonderfully wheelchair accessible stay. It’s safe to say that when I return to Gulf Shores and Orange Beach, I’ll definitely stay here again. Want to know why? 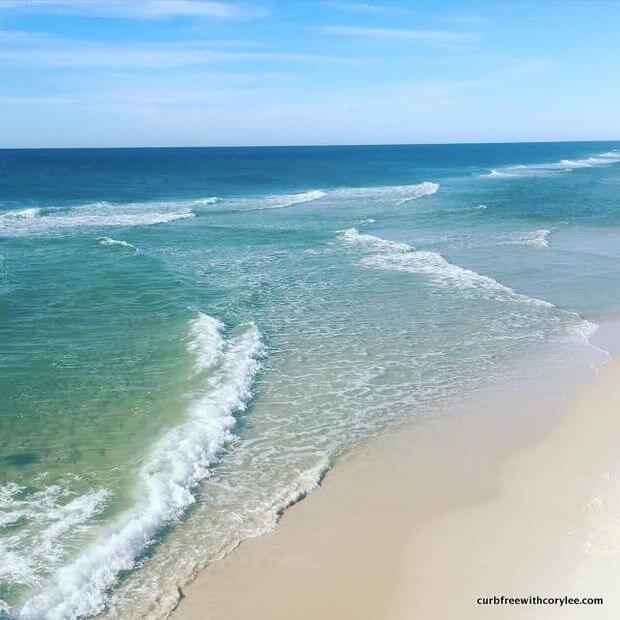 My number one criteria, aside from accessibility, for choosing a hotel is it’s location. It’s always great when a hotel is near popular attractions and landmarks. This means that it’ll take you less time to drive around, so you’ll have more time to spend doing fun things on your vacation. This Hilton Garden Inn is located in Orange Beach in an ideal location. You can be pretty much anywhere in Gulf Shores or Orange Beach within a 5-10 minute drive from the hotel. Some nearby attractions include the Hugh S. Branyon Backcountry Trail and Fat Daddy’s Arcade. I may be 25 years old, but I’m always down to play some games. There are also plenty of restaurants within a short drive from the hotel. 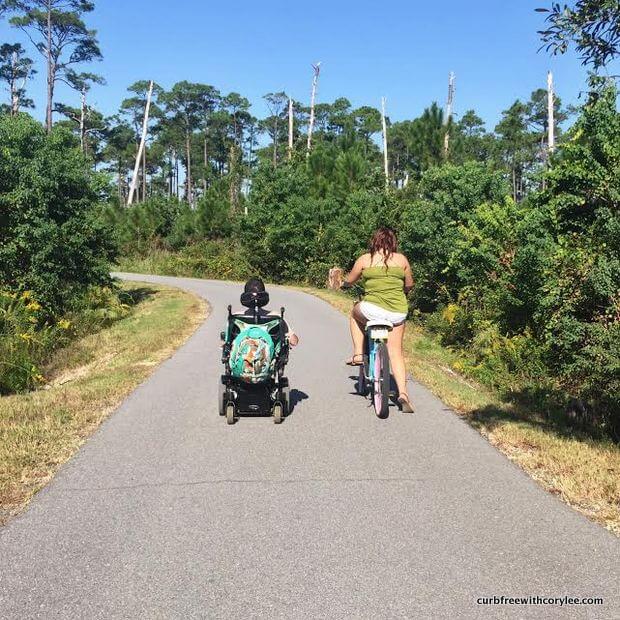 Rolling along the Backcountry Trail

The Beach & the Pool

If you’re looking to have some fun at the hotel instead of at the nearby attractions, you’re in luck! Hilton Garden Inn Orange Beach is a beachfront property. As a wheelchair user, it can be a bit tricky to get on the beach sometimes. However, in Gulf Shores and Orange Beach, Beach Power Rentals offers beach wheelchairs that you can actually drive with a joystick. Beach Power Rentals delivered one of their powered beach wheelchairs to the hotel for me to use during my stay. Hilton Garden Inn Orange Beach allowed me to leave the chair in their lobby area until I was ready to use it. 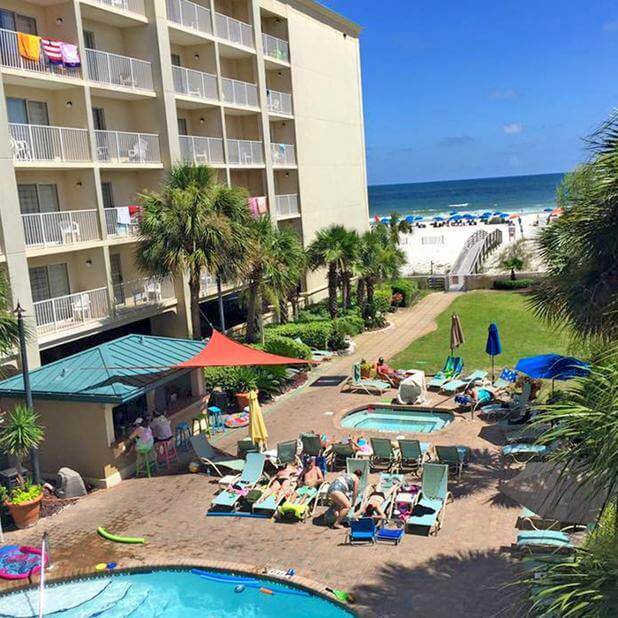 The hotel does have a wooden ramp that stretches from the pool area to the beach, but at the end of the ramp there is a slight step. The beach wheelchair might could have went off of it, but after speaking to the hotel management they let me know of a better accessible path to the beach. I exited the hotel lobby through the front door and took a right toward the parking garage. From there, it was a smooth path toward the sand. This was not out of the way at all and I was able to enjoy the Alabama Gulf Coast’s number one attraction (the beach) with my friends. 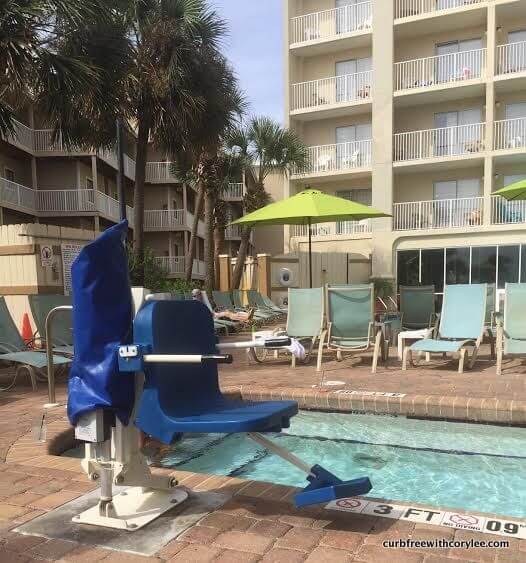 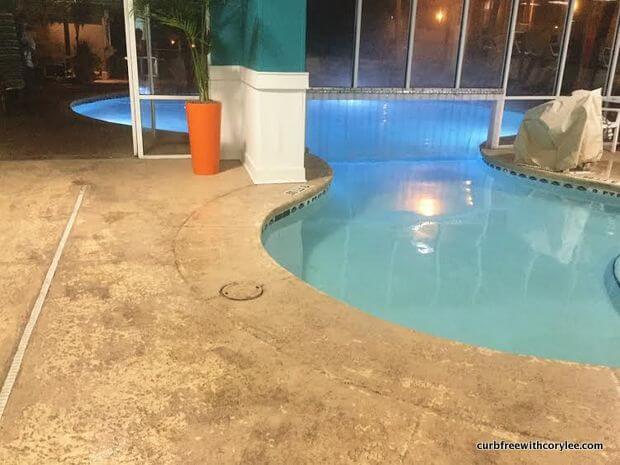 The hotel also has a pretty large pool and a hot tub, both of which come with an ADA access lift. I was thrilled to see that there were access lifts available. I’ve noticed that this is a common occurrence at Hilton hotels and that’s one of the many reasons why Hilton remains my favorite hotel brand.

The Bedroom and Bathroom

I stayed in a wheelchair accessible room and it had one King sized bed in it. There was plenty of clearance between the floor and the bottom of the bed so that my hoyer lift could fit under it. The room was also spacious and included a flat screen television and a desk that I could easily pull up to. 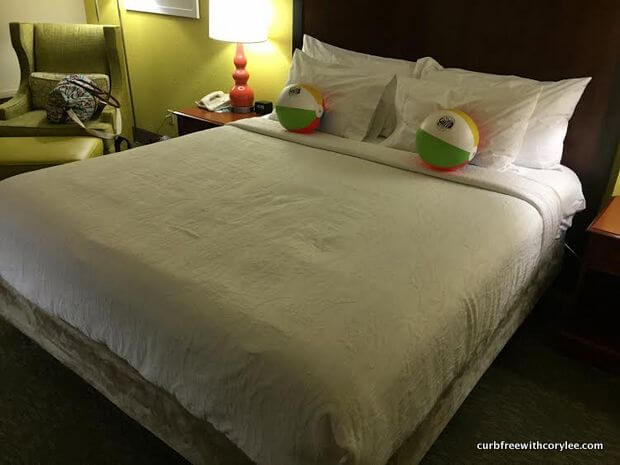 The bathroom had a “roll-in shower”, but when we arrived there was a small lip to get in the shower. It was only about an inch high, but my shower chair would not roll over it. I discovered this problem on the first day and told the front desk about it immediately. They said that they would try to fix it and I hoped that they’d be able to fix it soon. My friends and I went and visited some attractions in the area, and when we returned a few hours later the problem had been resolved. The hotel actually removed the lip and installed a ramp so that I’d be able to get in the shower smoothly. It was pretty remarkable that they fixed it so quickly. I later thanked them for doing that and they said that they appreciated me bringing it to their attention. They are now going to fix that issue in all of the accessible rooms at the hotel. Awesome customer service right there! The bathroom also had a pull-under sink and grab bars around the toilet. 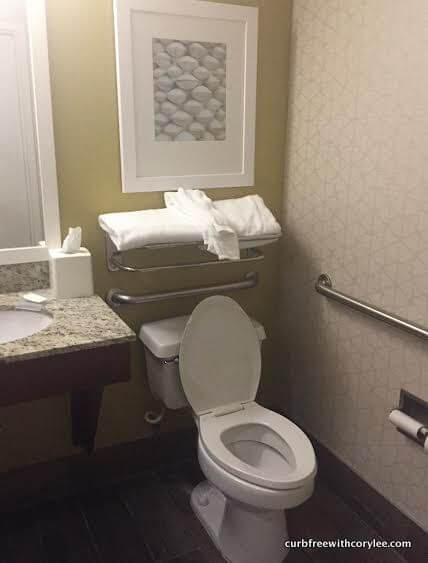 The Lobby and Breakfast

When I entered the Hilton Garden Inn Orange Beach for the first time, I was stunned. The lobby is beautifully designed and definitely has a garden vibe to it. I could have just lounged around in the lobby for a while and been happy. 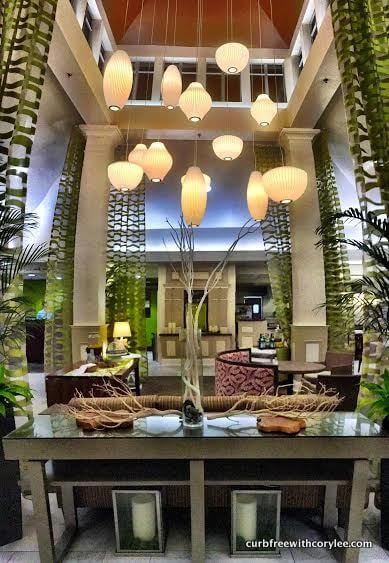 Just like everything else at the hotel, the breakfast is fantastic as well. It is not complimentary with your stay unfortunately, but at just $10 per day you can’t beat it. There is a full breakfast buffet with items such as biscuits, gravy, scrambled eggs, potatoes, and more. What’s great about this breakfast though, is the fact that you can order different items and have them brought to your table once they’re cooked. So, you can enjoy the buffet and then have hot waffles or french toast brought to you. If you’re staying at this hotel, there’s really no need to get out and hunt down a breakfast spot every morning because it doesn’t get much better than this!

Some of the breakfast tables

As you can see, the Hilton Garden Inn Orange Beach really does have everything that you could need for a perfect stay. Whether you are a wheelchair user and want to enjoy the beach for the first time or maybe you just want to have a relaxing stay… I know that you’ll love this hotel on the beautiful Alabama Gulf Coast as much as I did.

*A Note from Curb Free with Cory Lee: This post includes affiliate links. When you click on a link, I may receive a small compensation, which will help this blog grow into a better resource for disabled travelers.