Iceland is a bucket list destination for many travelers, and for good reason. This small country offers fantastic glimpses of the northern lights and absolutely unparalleled scenery. I recently ventured to this legendary island myself, and I’m glad to report that it’s quite an accessible place!

My home base was the city of Reykjavik, Iceland’s capital and the northernmost capital in the world. It’s not a huge city, but it is beautiful – bordered by deep blue seas with snow-covered peaks in the distance. I’ve already covered what to do, what to eat, and more in other articles here on my site, but in this article I’d like to share what transportation is like in Reykjavik. It’s surprisingly very wheelchair accessible and I enjoyed getting around the city by walking/rolling, taking taxis and riding the public buses. 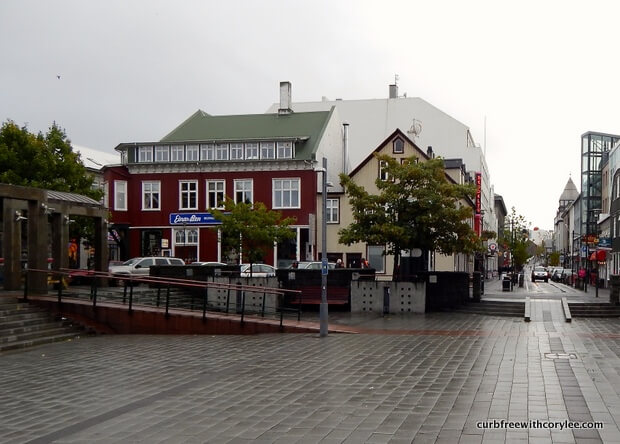 The main challenge in getting around Reykjavik is the weather. During a snowstorm or when the sidewalks are covered, rolling around the city isn’t such a great option. Luckily, despite the Arctic sounding name of Iceland, the country has a pleasant climate for much of the year. The weather was good in September when I visited, so I was able to use the city sidewalks with no problems!

It also helps that Reykjavik is small as far as international capitals go, and it almost has more of a small-town feel than a city vibe. Its size, as well as the fact that it’s one of the cleanest and safest cities in the world, helps its accessibility. Reykjavik has 10 main districts, and it’s divided further into quarters. Since most of the city is located on a peninsula, the layout is simple enough and there’s always a great view – just don’t let the sea on three sides confuse you!

There are regular curb cuts for wheelchair users, making it easy to roll around. Most of the sidewalks are in perfect condition as well. One neat feature is that all public buildings in the city are accessible, so there are a lot of places to explore. While many parts of the city are flat, there is a hill leading up to Reykjavik’s most famous landmark, Hallgrimskirkja. With my powered wheelchair this hill was no problem, but if you’re in a manual wheelchair and the sidewalks are icy, it could be worth getting a taxi or just ask your companion to give you a push. 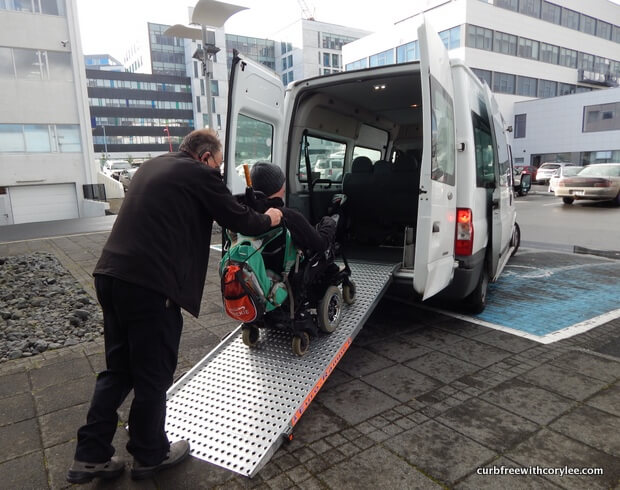 For times when the weather isn’t so great or you’re headed a further distance, there are a number of wheelchair friendly taxi companies in Reykjavik. While you might get lucky and be able to flag one down on the street, it’s a good idea to look up their phone numbers, because chances are you’ll probably have to call them to come pick you up. However, that doesn’t mean they’ll keep you waiting!

I used the company called Hreyfill the most often, and they always arrived very quick – within 5 to 10 minutes after I called them. If you call them in advance, Hreyfill can even arrange a day tour for you! Another company that provides accessible taxis is City Taxi, and they also offer fixed-rate rides between the city and the airport.

The wheelchair accessible taxis that I used were all high top vans with a long ramp that folded out of the back. I just wheeled into the back of the taxi and the driver then secured my wheelchair into place with tie-down straps. My drivers were all friendly, so I had a great experience and can highly recommend Hreyfill. 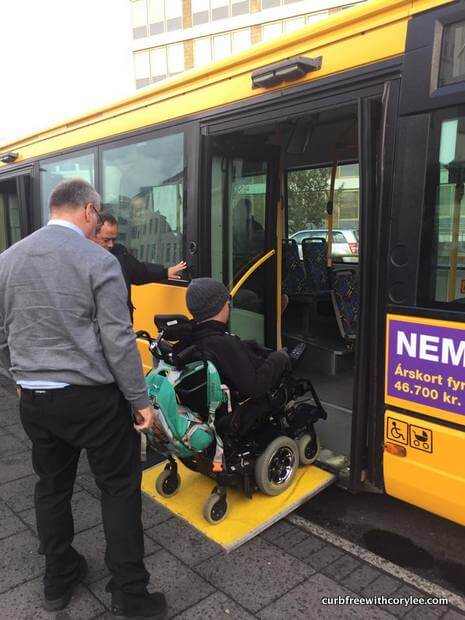 Getting on the city buses is easy breezy as a wheelchair user!

All public buses in Reykjavik are accessible – they’re equipped with a kneeling system and a fold-out ramp so that you can enter them in a wheelchair. The Flybus from the airport also accommodates wheelchairs, which is handy since it’s cheaper than taking a taxi.

The one difficult thing about the bus system is that it’s kind of confusing to figure out. Our concierge at Kvosin Downtown Hotel helped us a lot, but in case you’re not as lucky, I recommend studying the bus system beforehand. The bus system’s routes and timetables can be found here, and planning your routes ahead of time will definitely make your journey smoother. 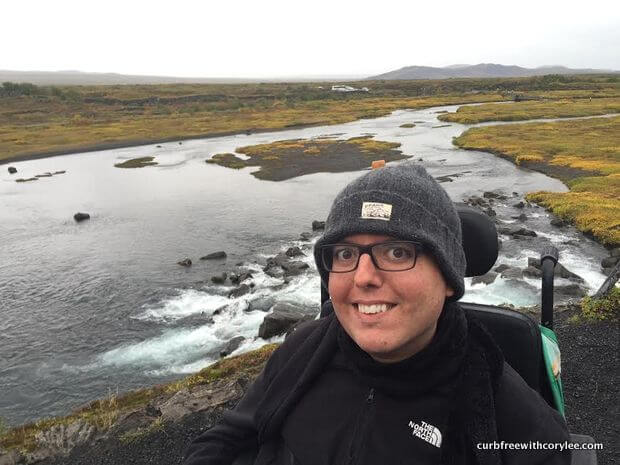 Most visitors to Reykjavik want to get out of the city for a day to take a tour of the Golden Circle and hunt the Northern Lights. I did both of these activities with Iceland Unlimited and had a fabulous, worry-free time! All of their tours are fully wheelchair accessible – paths, parks, sights, and even the restaurant where we stopped for lunch. You will travel in a high-top van with a fold-out ramp similar to the taxis, and I highly recommend going on a Golden Circle tour with Iceland Unlimited – it’s an amazing chance to see geysers, a UNESCO World Heritage park, and one of the most famous waterfalls in the country.

Of course, there are other companies which offer accessible day tours as well, but Iceland Unlimited is actually ran by a wheelchair user so they really know what they’re doing. The tours I took were definitely highlights of my trip, and it was nice to immerse myself in the Icelandic countryside and see some of the country’s best features.

So, there you have it. I highly recommend a visit to this beautiful and unique country, because despite its famously rugged landscapes, Iceland is actually very accessible! There’s no place quite like it in the world – the friendly and charming capital and the iconic scenery – and I’m thrilled to say that due to wheelchair friendly infrastructure and access to great tour and taxi companies, I was able to see it all. Transportation in Reykjavik gets an A+ from me, and it was some of the best wheelchair accessible transportation that I’ve encountered thus far in my travels.