The equator. It’s a place that I have wanted to visit for years. I always imagined that it would be insanely cool to be in two hemispheres at once. As a travel addict, I’m all for unique experiences and since there are only a handful of countries where you can visit the equator, this is definitely unique and bound to be a real highlight of any Ecuador travel experience. In fact, since the equator lies just outside of Quito, it was a big reason why I even wanted to visit Ecuador in the first place and probably what I was looking forward to the most during my trip.

Don’t get me wrong… the Amazon Rainforest completely blew my mind and ended up being one of my favorite experiences ever, but before going to Ecuador, I definitely thought that visiting the middle of the world would outshine everything else. Did it live up to my expectations? Let’s see… 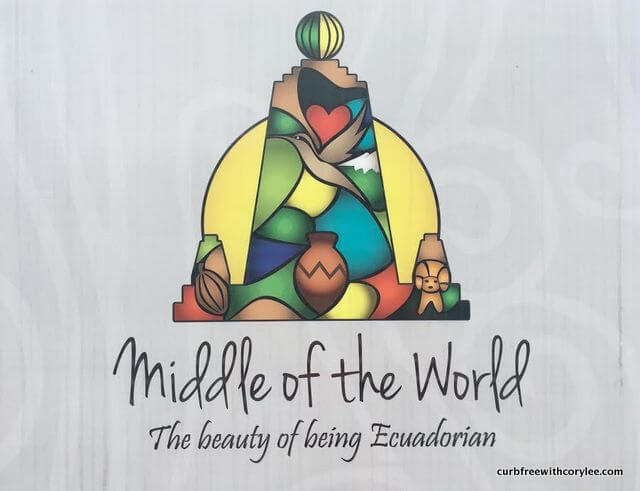 Mitad del Mundo (“middle of the world” in Spanish) lies about 45 minutes north of the capital city of Quito. After exploring Quito for several hours one morning, we set off to visit the equator with Ecuador for All, my Ecuador travel company of choice. This company had an adapted van with a lift and tie-downs for my powered wheelchair. Both our driver, Cleber, and our awesome guide, Soledad, were exceptional. If you’re a wheelchair user that is thinking of traveling to Ecuador, I can promise that Ecuador for All will take great care of you. 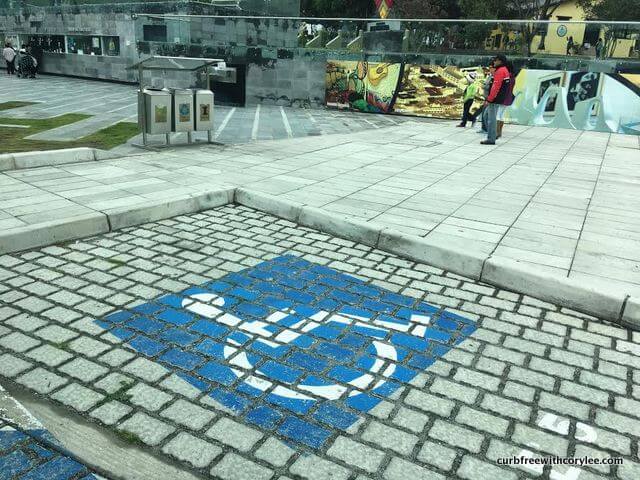 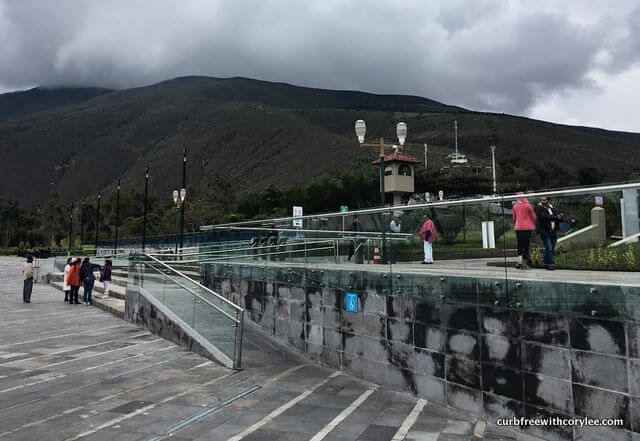 The symbolic monument is quite tall (99 feet) and a sense of excitement came over me as soon as I saw it. I had dreamed of being in this exact spot for so long! There is a small museum inside the monument, which is accessible, but we opted to just observe it from the outside and take plenty of pictures with it. There was also a line to show where the northern and southern hemispheres join, and it’s necessary to straddle the line for some photos. 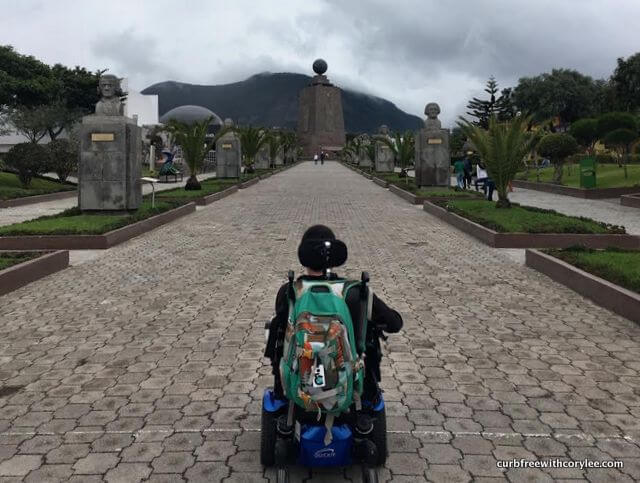 While it is fun to do all of this at Mitad del Mundo, would you believe it if I told you that the actual equator is not located here?!

In 1736, a French explorer calculated that this was the location of the equator, but with technology’s advancements, it has been determined that the equator really lies about 800 feet to the north at the Intiñan Museum (I’ll tell you more about this museum in a bit). While Mitad del Mundo does not have the actual equator, it is still definitely worth visiting in my opinion since it’s the most famous equatorial spot in Ecuador. 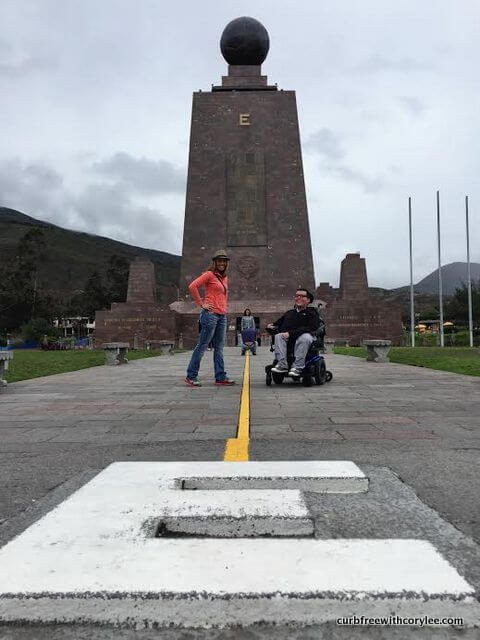 In addition to getting your photo with the monument and the “equator” line, there are many shops and restaurants at Mitad del Mundo. Every shop that I saw had a step to get inside, but some friendly guys picked up my heavy wheelchair so that I could go in and get some souvenirs. There were so many good deals that I just couldn’t resist!

Now that we had all of our souvenirs, we wanted to grab a bite of lunch. There were quite a few restaurants to choose from, but Soledad said that her favorite was Restaurante Yaravi and it had a nice ramp to get inside, so that’s where we went. Their menu had a variety of authentic Ecuadorian dishes to choose from such as chicken, soup, and more, but you’ll never guess what I ordered… guinea pig!! No, I’m not kidding. Guinea pig is extremely popular in Ecuador, so I thought that there would be no better place to try it than right here in the middle of the world. It’s an Ecuador travel experience, why not!

After a 15 minute wait, the guinea pig arrived in front of me and it didn’t look at all like what I expected. It was HUGE (the entire guinea pig) and I could even see the ears still on it. As we cut into it, it had a lot of very small bones in it as well. I’ll admit that I was pretty nervous to eat it, but I took my first bite and it wasn’t completely terrible. It had a strong game taste, kind of like rabbit or venison, so I wasn’t a big fan, but it was nowhere near as bad as the fermented shark that I ate in Iceland. I only ate a few bites of it and then gave the rest to Soledad (she loved it). Luckily, my mom ordered chicken and fries, so I ate some of it.

If you like trying new foods around the world, I’d say to order the guinea pig. It certainly made for a unique dining experience at Mitad del Mundo. 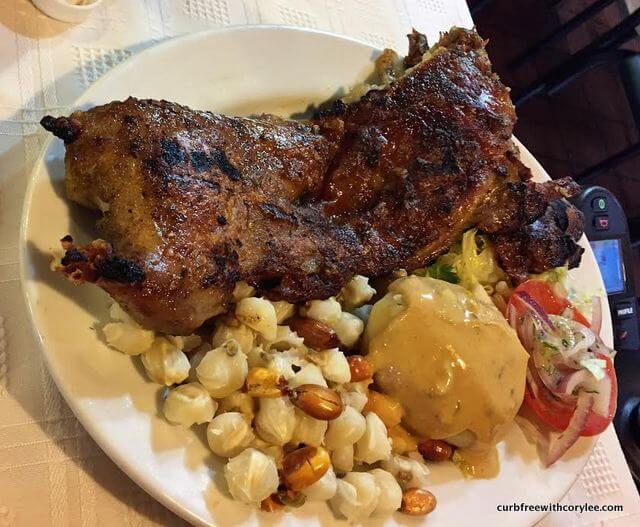 Now that we had straddled the fake equator and filled up on guinea pig, we wanted to see the real equator at the Intiñan Museum. This mostly outdoor museum was a very short drive away (2 minutes) from Mitad del Mundo and as soon as we arrived at the museum, I knew that we were in for something special. There were llamas right by the parking area to greet us and a cool/scary looking statue at the entrance. 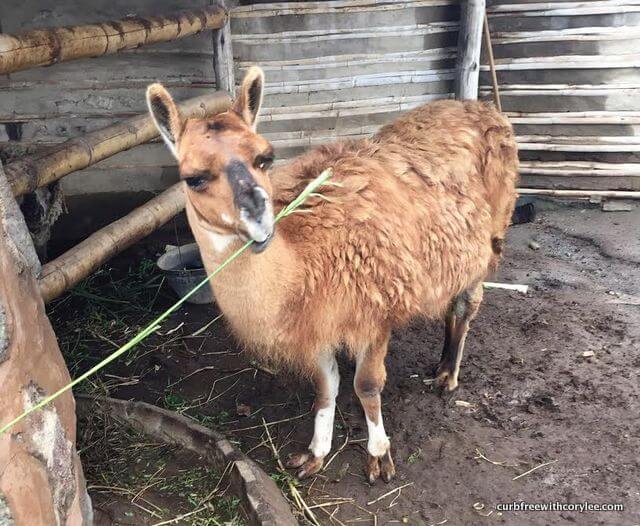 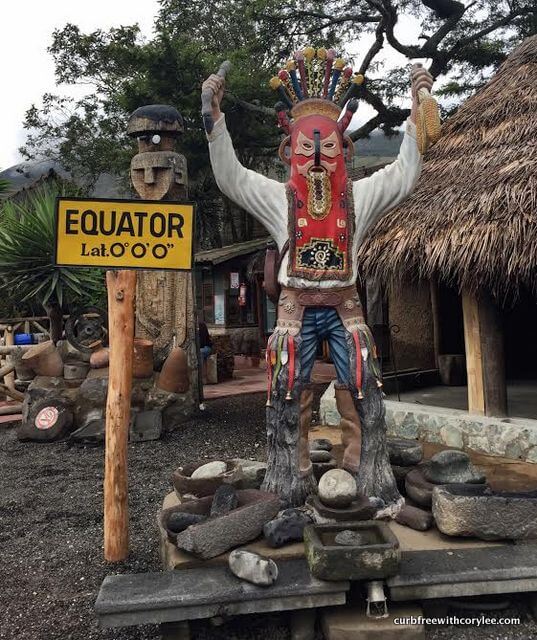 We quickly met up with an Intiñan Museum tour guide and he told us about some of Ecuador’s cultural highlights. There were exhibits that showed shrunken heads, live guinea pigs (I felt really bad after just eating one), and we even got to see what a typical hut looks like for the indigenous people. It was fascinating to learn about the culture of Ecuador on this Ecuador travel tour. The tour was wheelchair accessible and our guide was accommodating, but there are some pretty steep paved hills at the museum, so you may want to wear a seatbelt. 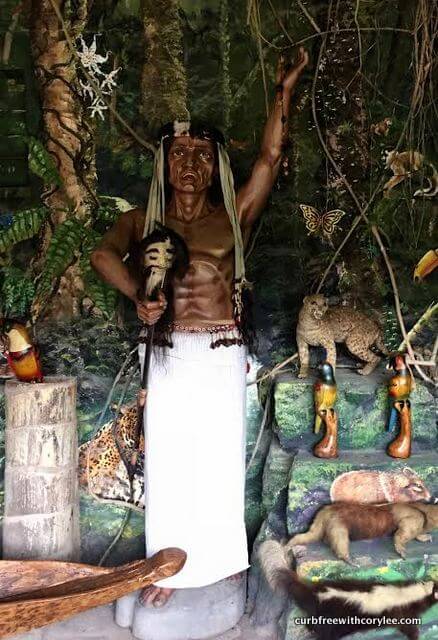 Next, it was time to try some experiments on the actual equator. This is what I was looking forward to the most. For the first experiment, a tub of water was sitting directly on the equator. Some small leaves were placed in the water and we watched them go straight down the drain once the plug was pulled. We then moved about 8 feet into the southern hemisphere and the same thing was done again, but this time the leaves went clockwise down the drain.

We crossed the equator once more and went to the northern hemisphere. The leaves were supposed to go counter clockwise down the drain, but they didn’t move a whole lot this time. They kind of just went straight down again. Our guide told us that this happens sometimes, depending on weather conditions. It was so awesome to see it go straight down on the equator and then clockwise in the southern hemisphere though. Check out this video of the experiment –

In addition to the water experiment, you can also try to balance a raw egg on top of a nail on the equator. Unfortunately, the podium to try this was up too high for me to reach in my wheelchair, but I enjoyed watching others try it. Some members of our tour group were able to do it successfully, despite it taking some concentration and patience. The last experiment was really funny to watch, even though I couldn’t do it also. Everyone else had to stand on the equator line and try to walk in a straight line with their eyes closed. It was impossible for everyone and my mom nearly fell down after just two steps. The forces on the equator are serious business!

Before leaving the Intiñan Museum, we got some photos on the equator line and they even gave us a stamp in our passports saying that we visited the equator. What a spectacular souvenir! It took us about an hour to explore the Intiñan Museum and do the experiments, and I loved every minute of it. 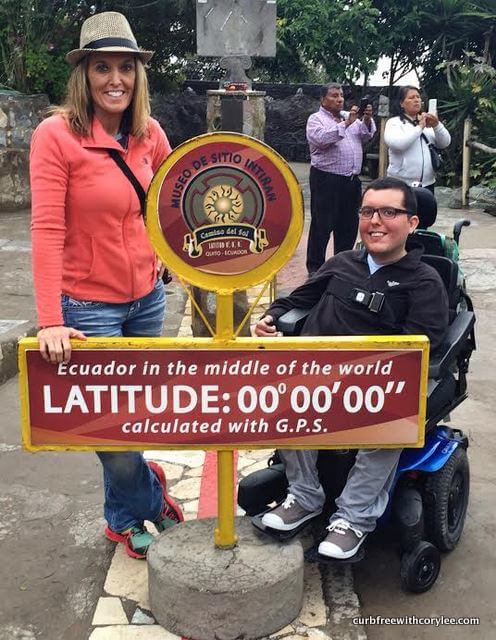 While Mitad del Mundo and the Intiñan Museum are vastly different, they are both worth visiting in my opinion, and they were both wheelchair friendly as well. I had such a fun time on this equator line adventure and it definitely lived up to all of my expectations. After all, where else in the world can you watch exciting experiments after eating a guinea pig while being in two hemispheres at once?? 🙂

Have you read this crazy travel story? Following the Equator: A Journey Around The World. Get it to read during your flight. Trust me, it’s fantastic.

Check out the Lonely Planet guide to Ecuador for even more detailed information.


*Thank you to Ecuador for All for making this experience possible! Also, this post includes affiliate links. When you click on a link, I may receive a small compensation, which will help this blog grow into a better resource for disabled travelers.