“What do you love about working here at the Jack Daniel Distillery?” I asked our tour guide. “The best part is getting to meet people from all over the world. Since Jack Daniel’s whiskey is distributed to more than 165 countries, people from all over come to see where their favorite whiskey is made”, she said with an enthusiasm. Our tour guide’s name was Brandi and I could sense in her voice that she had a passion for not only the taste of the whiskey, but the long and varied history that has gone into making Jack Daniel what it is today. In her passion, it was easy to see that the story of a small town boy who made an empire back in the 1800s is just as fascinating now as it was back then. I’m not sure what exactly I expected to take away from the Jack Daniels Distillery Tour before going, but in the end it was nothing like I imagined and everything that I hoped for. 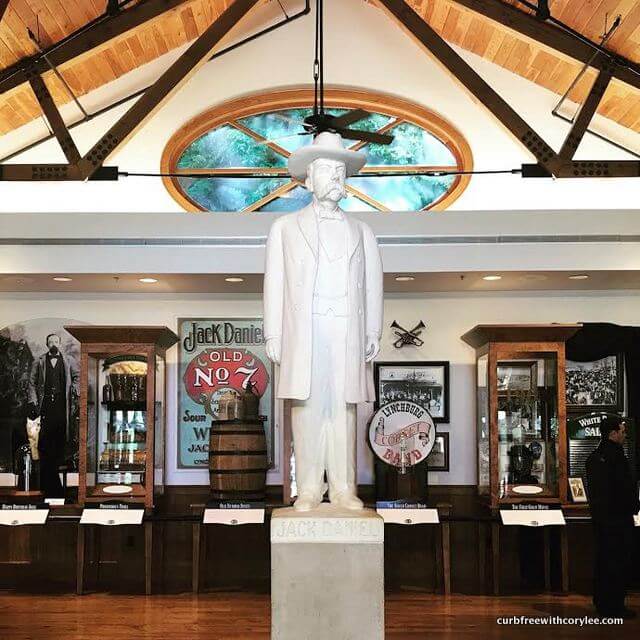 As my mom and I drove into Lynchburg, Tennessee, there were several thoughts running through my head. Most of them went something like “Wow, this is really the middle of nowhere”, but the main thing that I kept thinking about was how excited I was to try some Jack Daniel’s. Back in my college days at the University of West Georgia, Jack and I got to know each other pretty well, but I haven’t seen him in a while. I was excited to catch up with Mr. Daniel in the form of some whiskey tasting later in the day, but first came the Jack Daniels Distillery Tour.

Lynchburg is a tiny town with only about 600 residents and one stoplight, so as long as you can MapQuest your way to Lynchburg, the distillery will be easy to find. Lynchburg is only 1.5 hours away from Nashville and about 1 hour from Huntsville, so it would make for a fantastic day trip from those cities. My mom and I parked at the Welcome Center on the right side of the road and then walked/rolled across the street to the Visitor’s Center. The Visitor’s Center was under construction, so it was not possible to park there. The walk from the Welcome Center only took about three minutes and we soon met up with our guide. 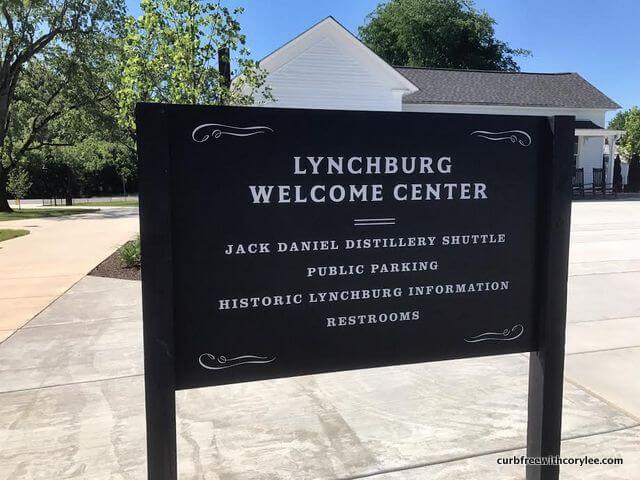 The Visitor’s Center was an attraction in itself, complete with a statue of Jack Daniel and museum like exhibits about the history of the company and the process of making the whiskey. Our guide, Brandi, showed us around and described some of the exhibits and fun facts. “Every drop of Jack Daniel’s is made right here in Lynchburg, but Lynchburg is actually in a dry county” said Brandi. This means that alcohol cannot be sold within the county, but they have made some exceptions for only the distillery. I thought that was pretty interesting since the distillery is basically the foundation of the county. If you wanted to go to a nearby restaurant and order a Jack & Coke after your tour, that’s not possible. 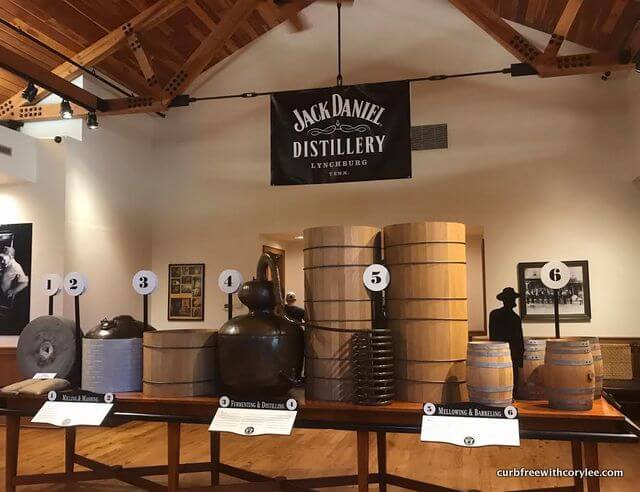 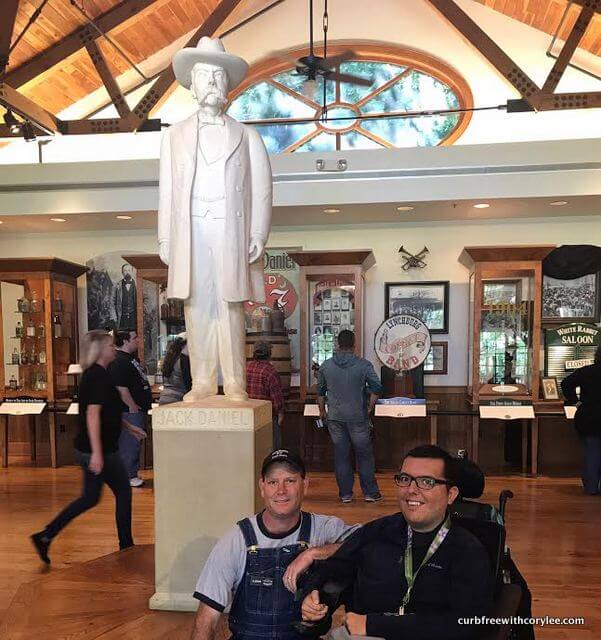 I even got to meet Jack Daniel’s great nephew in the Visitor Center.

After looking around the Visitor’s Center, it was time to begin our actual tour. The distillery offers tours seven days per week, and they have a wheelchair accessible modified tour. Just call in advance to let them know that you’ll need the accessible Jack Daniels Distillery Tour.

When we exited the Visitor’s Center, there was a bus waiting and it had a wheelchair lift. I loaded into the bus and we drove just a few minutes to our stop. For the remainder of the tour, I rolled from place to place without the bus. 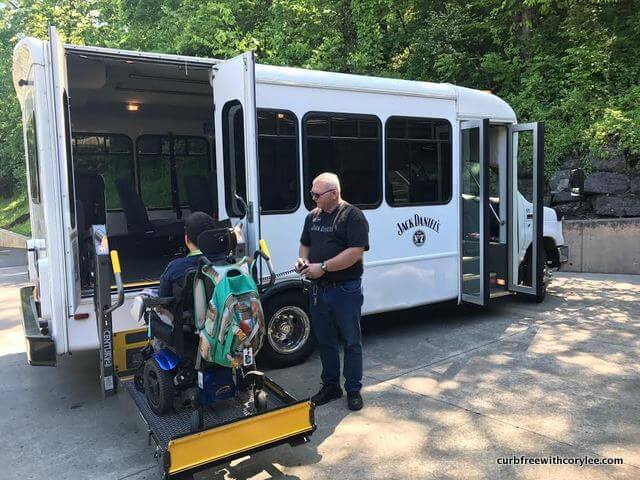 The tour started at the Rickyard, where the charcoal is made. To be considered “Tennessee Whiskey”, the whiskey has to be mellowed through charcoal. The fine people at Jack Daniel’s do not just go to the local Walmart and pick up some charcoal… they actually make their own charcoal! Some wood is piled high, then doused with 140-proof whiskey and set on fire. After a while of burning, it becomes charcoal. Unfortunately, on the Sunday that I visited, we didn’t get to witness the wood burning, but our guide did a great job of explaining it and I could see the engulfing flames in my mind. 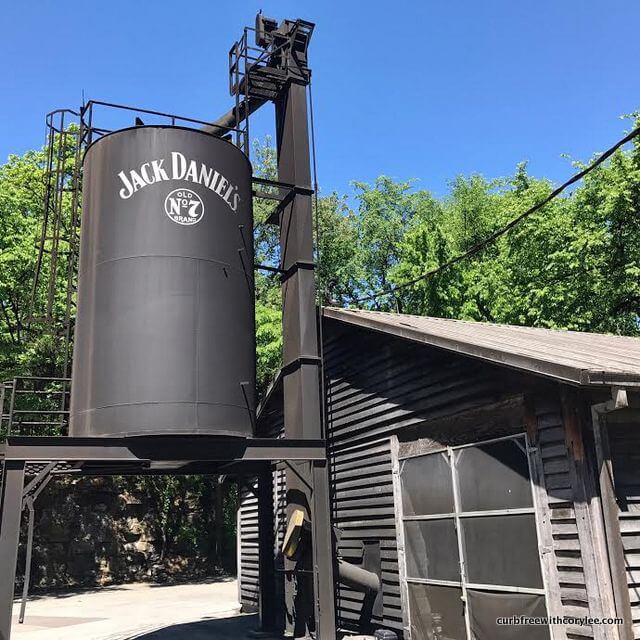 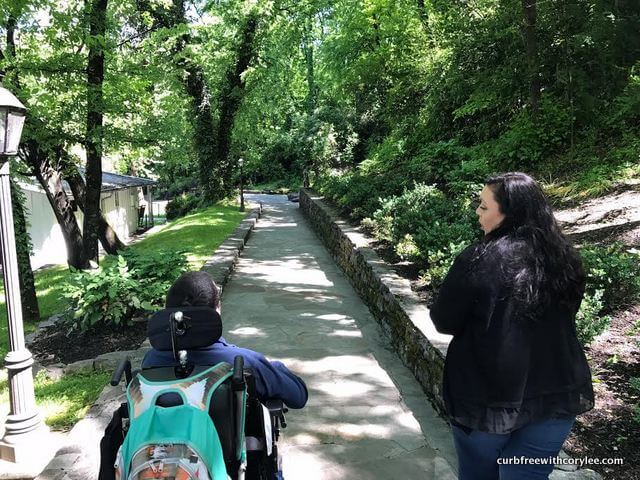 The recipe for Jack Daniel’s whiskey includes 80% corn, 12% malted barley, and 8% rye. This mash is combined with Cave Spring water and then put in a barrel. The barrel is considered an ingredient also, as it contributes to the color and flavor of the whiskey. During our tour, we got to see the barrel house, where the barrels of whiskey are kept for a minimum of four years. There are about 80 barrel houses in Lynchburg and each house holds approximately one million gallons of whiskey. A long and drawn-out process goes into each bottle of Jack that you buy, so next time you’re sipping on it, think of the hours of labor and years that it took to make that drink. 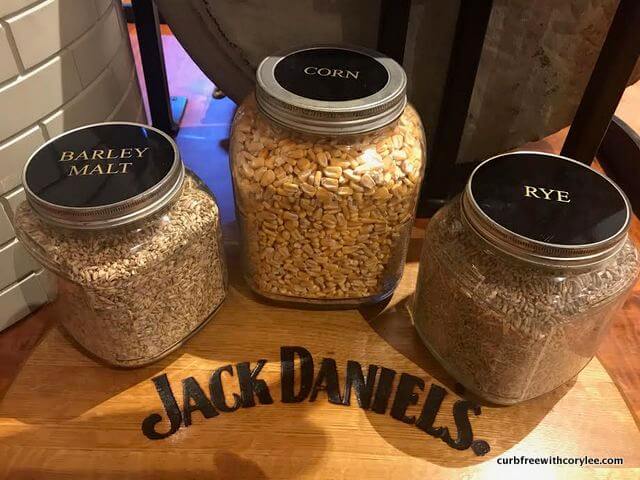 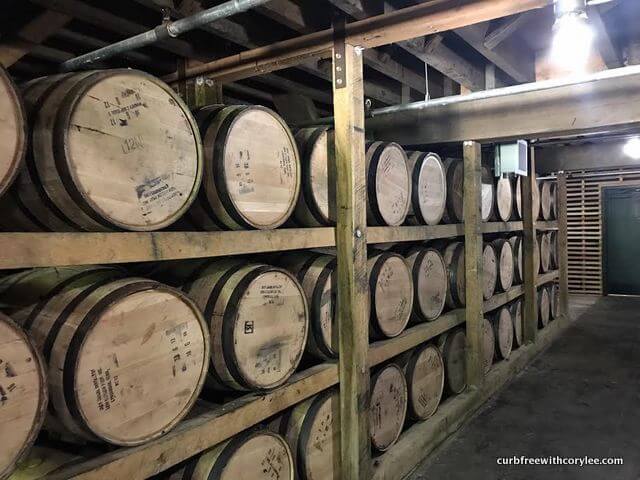 As I mentioned, the whiskey is made with Cave Spring water and we were actually able to see part of the Cave Spring. The spring’s limestone filtered, iron-free water flows at 56 degrees year round, making it perfect for whiskey. Right in front of the Cave Spring stands a statue of Jack Daniel. He’s standing on a rock, so the statue is funnily enough called “Jack on the Rocks”. As someone that always loves a good pun, I thought that was a pretty clever idea. 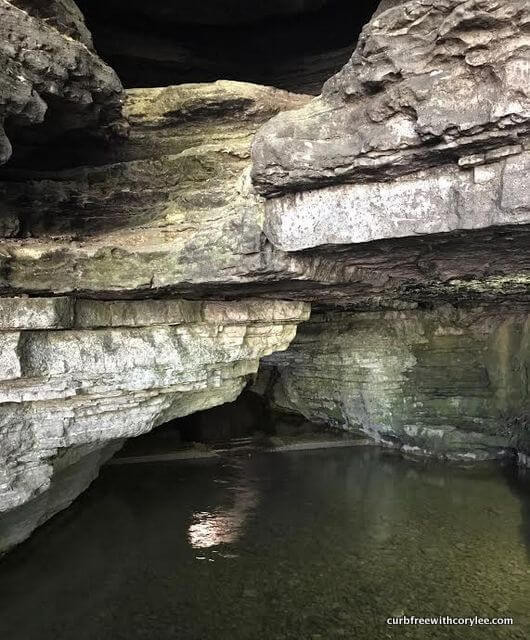 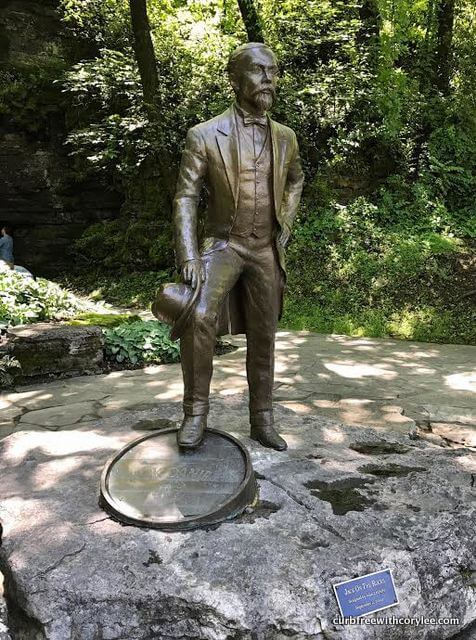 Jack on the Rocks

The next, and my favorite non-whiskey tasting, stop on our tour was Jack’s original office. To be an old building from the 1800s, the office was surprisingly accessible. We learned about some of the company’s business policies, including their motto “Every day we make it, we’ll make it the best we can”. The coolest part of the original office was seeing Jack’s desk and the safe that killed him. One morning in 1905, Jack could not remember the combination and kicked the safe in frustration. He hurt the big toe on his left foot and died six years later from complications (probably blood poisoning). Kicking the safe led to Jack “kicking the bucket”, as they say. I was a bit nervous to even be near the safe, as it’s obviously lethal, but I didn’t kick it, so hopefully I will be okay. 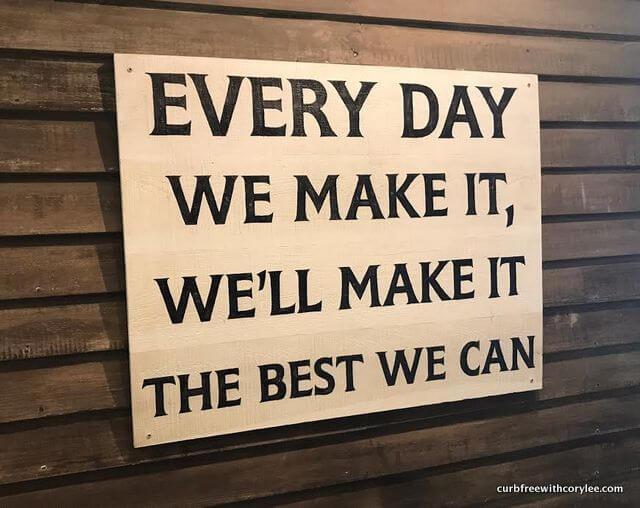 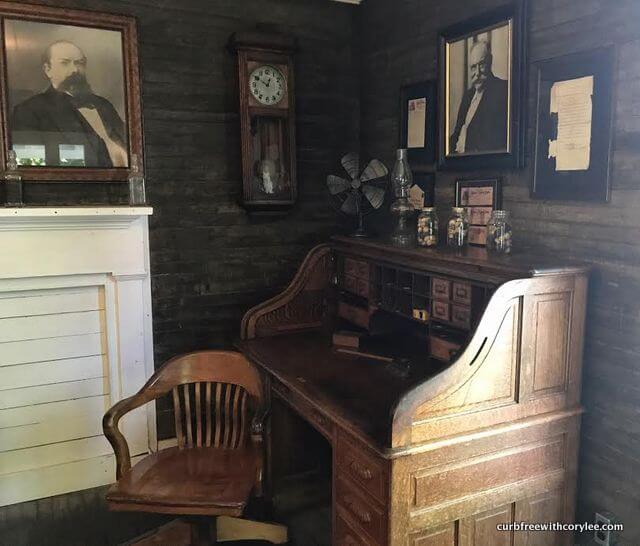 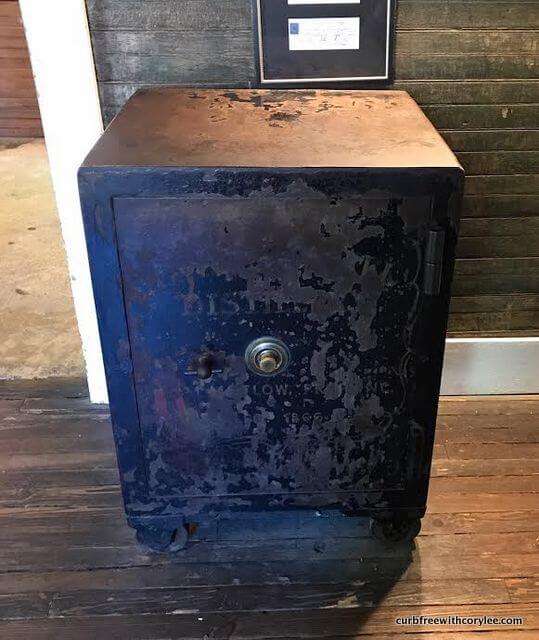 The last part of our Jack Daniels Distillery Tour was the one that I was looking forward to the most: the whiskey tasting! After learning all about how the whiskey was made and who exactly Jack Daniel was, it was time to sample the product. The tasting started with trying a shot of whiskey prior to mellowing and then a sample of it after mellowing. The whiskey before mellowing took my breath away because it was so strong. I could easily tell the difference between the two. After trying these, we got to sample five of the most popular kinds of Jack Daniel’s. We tried Old No. 7, Gentleman Jack, Single Barrel, Tennessee Honey, and Tennessee Fire. Each one had a distinct flavor, but my favorites were Tennessee Honey (it was smooth and quite tasty) and Gentleman Jack. The only flavor out of the five that I had previously tried was Old No. 7, the Jack Daniel’s classic. It was fun to try all of these new whiskey flavors and I even discovered a new favorite during the process. If you would like to purchase some liquor to take back home with you, you can in the White Rabbit Bottle Shop at the end of the tour. 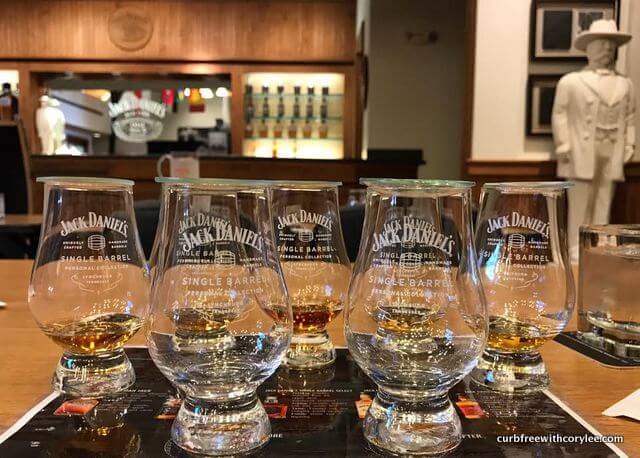 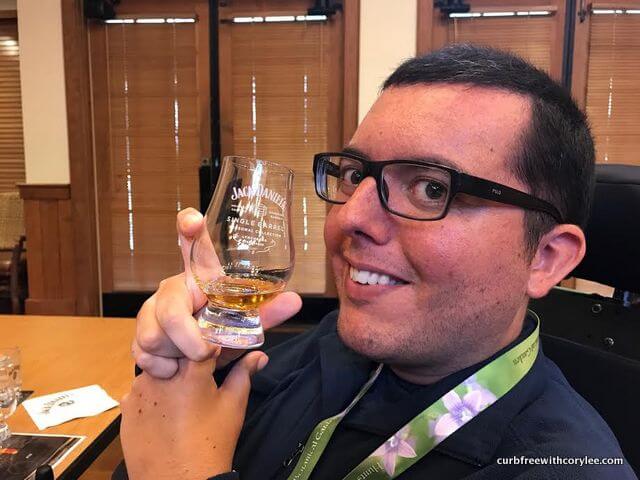 Now that our tour was finished and we were good and whiskey’ed up (not really… all 7 of the whiskey samples combined was only about the size of 1 full cocktail), it was time to get some lunch. We went out onto the distillery patio and ate food from Miss Mary Bobo’s Boarding House Restaurant. Miss Mary Bobo’s specializes in southern cuisine and is an essential part of any visit to Lynchburg, Tennessee. The restaurant is very popular, so you will definitely need reservations in advance.

The nice thing about Miss Mary Bobo’s is that the menu changes from day to day, so you can go multiple times and get something different every time. On the day that I visited, we were served fried chicken, roast with vegetables, green beans, macaroni and cheese, mashed potatoes, pinto beans, and cornbread. And of course, it wouldn’t be a true southern feast without dessert to top it off. We had peach cobbler and ice cream. Everything was phenomenally DELICIOUS!! Every time I think about it, I start salivating again. 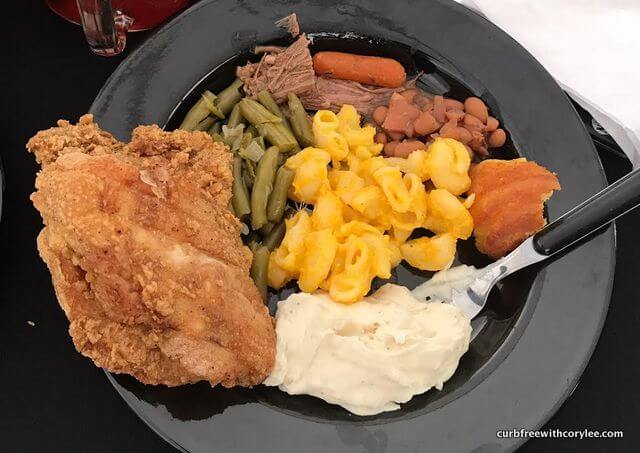 With a full stomach, we took a 5 minute walk over to downtown Lynchburg. There were curb cuts on every sidewalk and it was an easy stroll. Downtown Lynchburg was a cute small southern town that made me feel like I was rolling back in time. There was a horse and carriage going through town and plenty of shops and eateries (but trust me, you want to eat at Miss Mary Bobo’s!!). 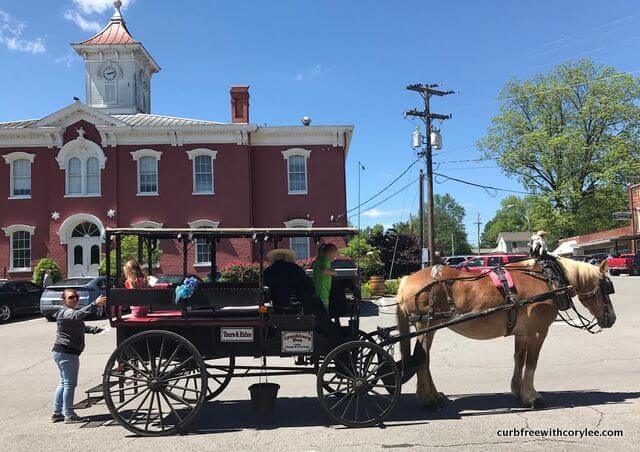 A must-visit during my stroll through Lynchburg was the Moon Pie General Store. Moon Pie’s are a classic southern treat and I was pretty much raised on them. You can buy them at the store, along with many other candies. There were all kinds of old school candies available, including my personal favorite, Slap Stix. I felt like I was a kid again. 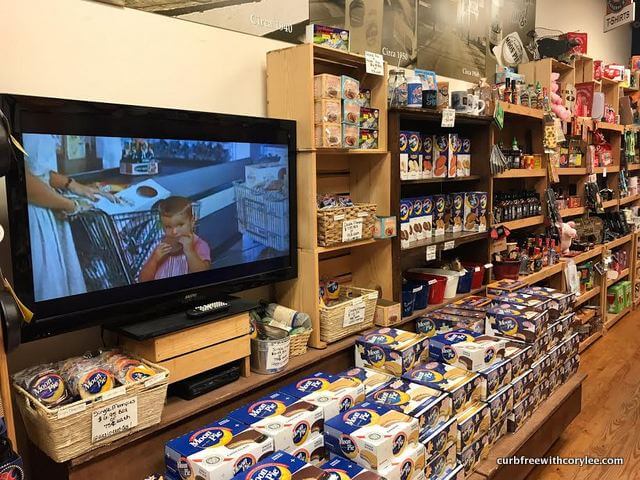 The Jack Daniel’s official souvenir shop is located downtown inside the Hardware Store. In there, you can find t-shirts, shot glasses, and anything else that you can possibly imagine. The store is huge and actually has an elevator toward the back, which I used to get up to the second level. Even if you don’t buy anything, it’s still worth visiting the Hardware Store, as you can see all of the quirky Jack Daniel’s items. It’s the perfect place to complete any visit to Lynchburg after your Jack Daniels Distillery Tour. 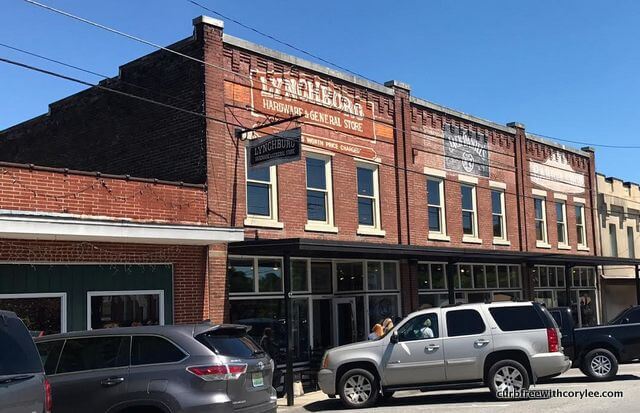 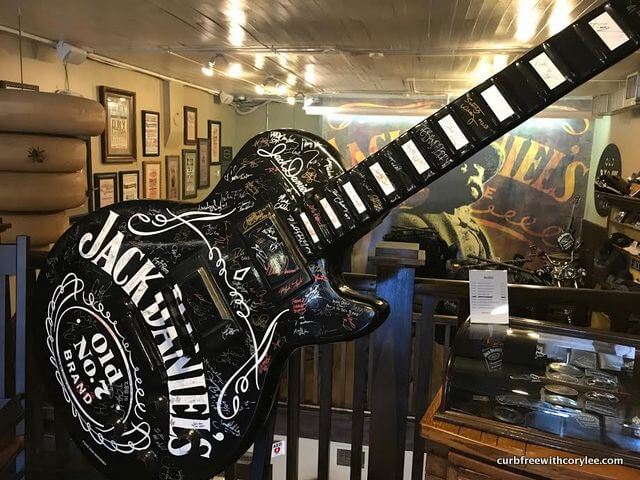 Before visiting Lynchburg, I honestly didn’t know a single thing about whiskey. After the Jack Daniels Distillery Tour however, I feel like I learned a lot about it and I certainly gained an appreciation for the work that goes into making every bottle of Jack Daniel’s. If that small town boy named Jack could see the empire that he has built today, I’m sure that he’d be tremendously proud. I’ll never look at a Jack & Coke the same way again…

To learn more about going on your own Jack Daniels Distillery Tour, visit the Jack Daniel’s website.

*Thank you to the Jack Daniels Distillery Tour for hosting me. All opinions are authentic and my own. This post includes affiliate links. When you click on a link, I may receive a small compensation, which will help this blog grow into a better resource for disabled travelers.