Share388
Tweet
Pin97
485 Shares
To be honest, I’m not a big sports fan. At all. I don’t know why, but sports have just never really been my thing. However, when I created my bucket list about 5 years ago, the first thing that went on it was “Attend the Super Bowl.” As someone that prefers watching reality shows (fellow Big Brother fans, where you at?!) instead of football games, I’m not entirely sure why I immediately added the Super Bowl to my bucket list, but I did. It just seemed like the ultimate event experience and if I only attended one sporting event in my life, why not make it the Super Bowl?
.
As soon as I heard that the Super Bowl would be in Atlanta in 2019, I started researching how to get tickets. Atlanta is only about 90 minutes from my house, so it would be super easy to get to. However, getting tickets for less than $5,000 apiece looked like it might be a bit tougher. After some thorough research though, I eventually stumbled upon something called the Super Bowl ADA Random Drawing. Basically, anyone with a disability that needs accessible seating can enter for the chance to purchase 2 accessible seats to the Super Bowl at face value. I entered the ADA ticket lottery in March 2018 and found out in October 2018 that I “won” the ticket lottery and could buy 2 accessible tickets at face value ($950 per ticket). I quickly submitted payment, received the physical tickets in January 2019, and was ready to check off my #1 bucket list item on February 3rd, 2019. Here’s how my experience at Super Bowl LIII went, and at the bottom of this post are step-by-step instructions on how you can enter the Super Bowl ADA Random Drawing for tickets to next year’s big game –
. 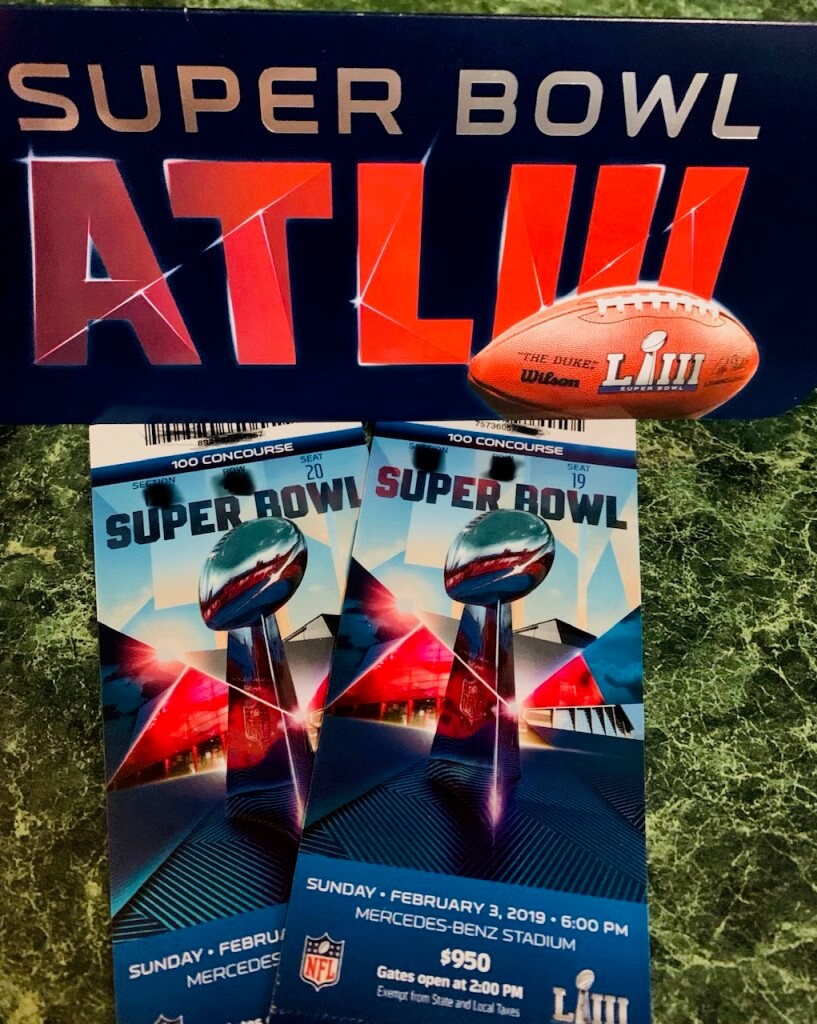 .
My mom and I arrived in Atlanta around 1pm, about 5.5 hours before the game started. We wanted to experience all of the Super Bowl festivities before the game and we were also worried that traffic would be pretty bad going into Atlanta. To our surprise though, there was no traffic. We zoomed into downtown Atlanta and went directly to our assigned parking lot.
. 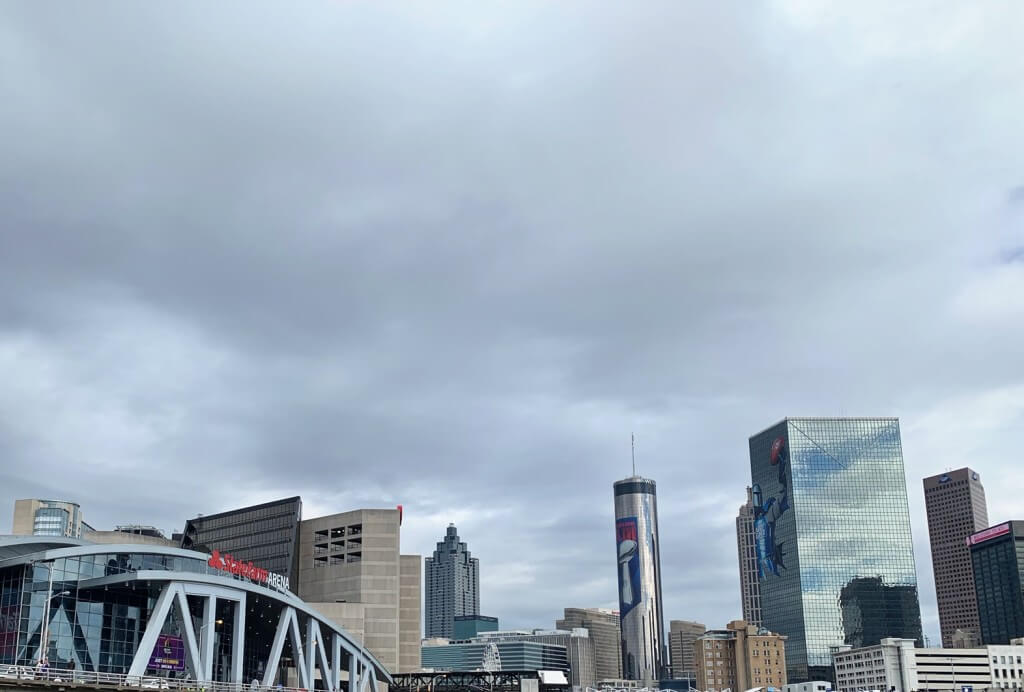 .
The Super Bowl sold parking passes online for $100 in the weeks leading up to the game and I would highly recommend purchasing your parking pass through the actual Super Bowl site ahead of time instead of trying to figure out where to park the day of. There was a parking lot for people with disabilities and it was easy to find, thanks to clear directions on the parking pass. The accessible parking lot was the closest lot to Mercedes-Benz Stadium and only a short roll/walk away from all of the festivities. Golf carts were also available if someone needed assistance getting over to the stadium. While parking in the ADA lot was a bit expensive, it was worth it to be so close to everything. Parking would have been a nightmare if we didn’t get this in advance.
. 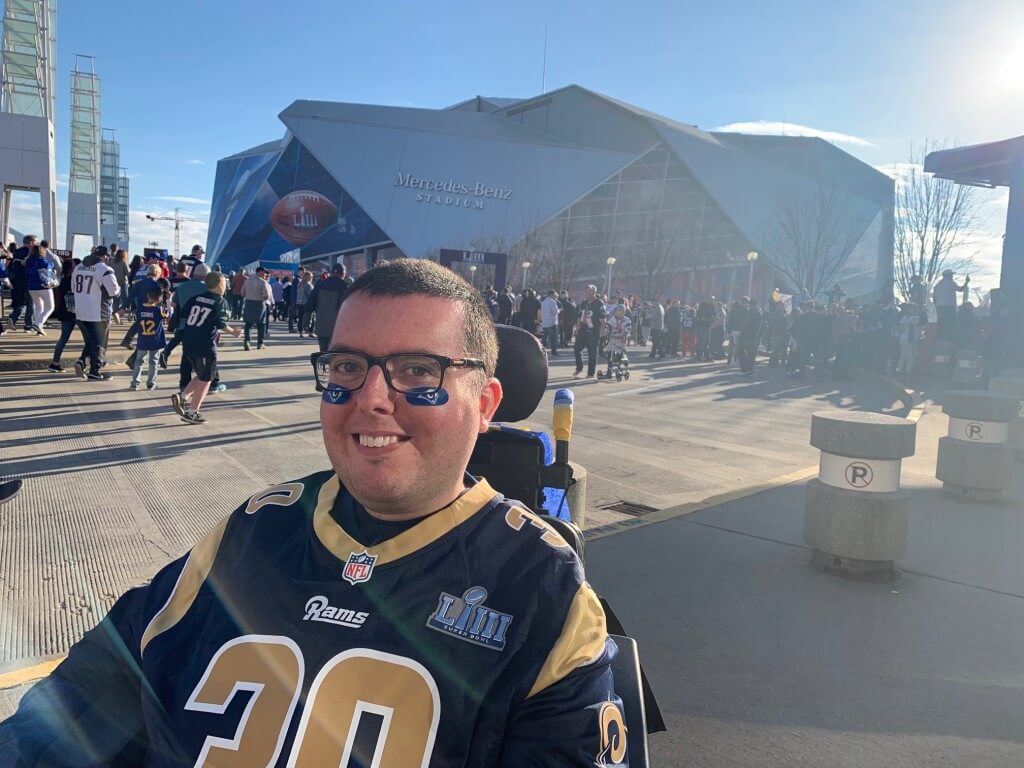 .
After parking, we headed over to Centennial Olympic Park. There were thousands of people in the park getting ready for the Super Bowl. Even ESPN was there doing pre-coverage before the game. We met up with Becci and Chris of the travel blog Tattling Tourist and we all tried to be seen in the crowd on ESPN. There were a ton of people trying to do the same thing, so I doubt you could see us on TV, but it was a fun experience. The Super Bowl hype was insane and being around so many excited people made me even more ecstatic for the game that night. Whether you’re a football fan or not, the energy surrounding the event will definitely have you screaming for one or both of the teams.
. 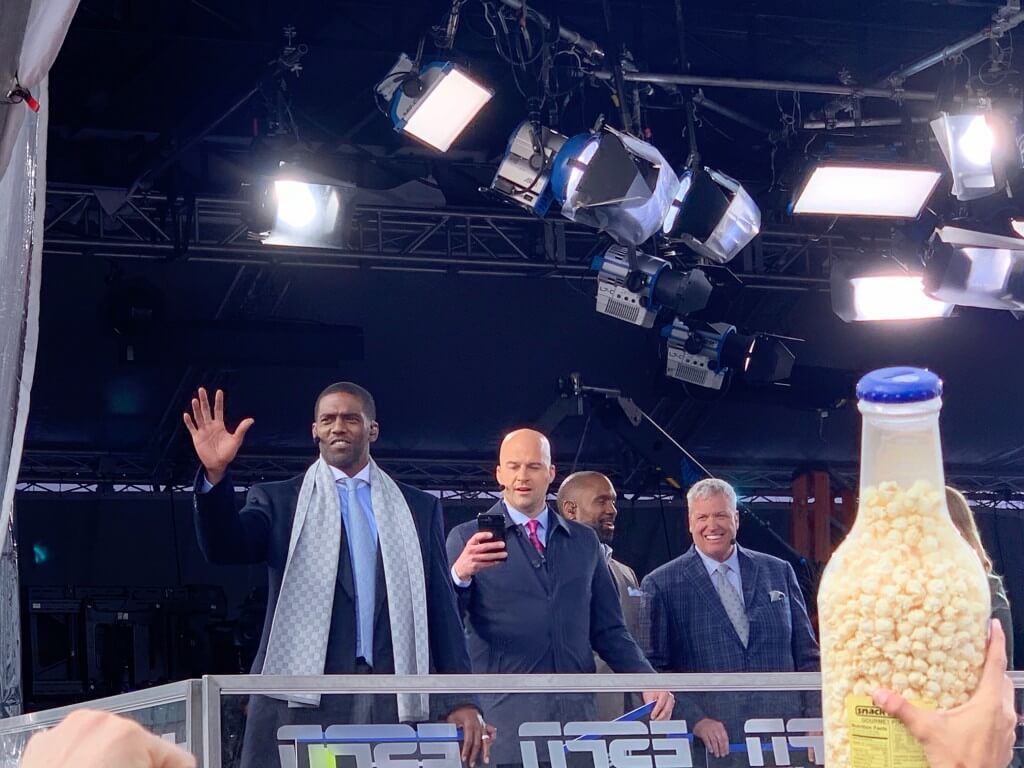 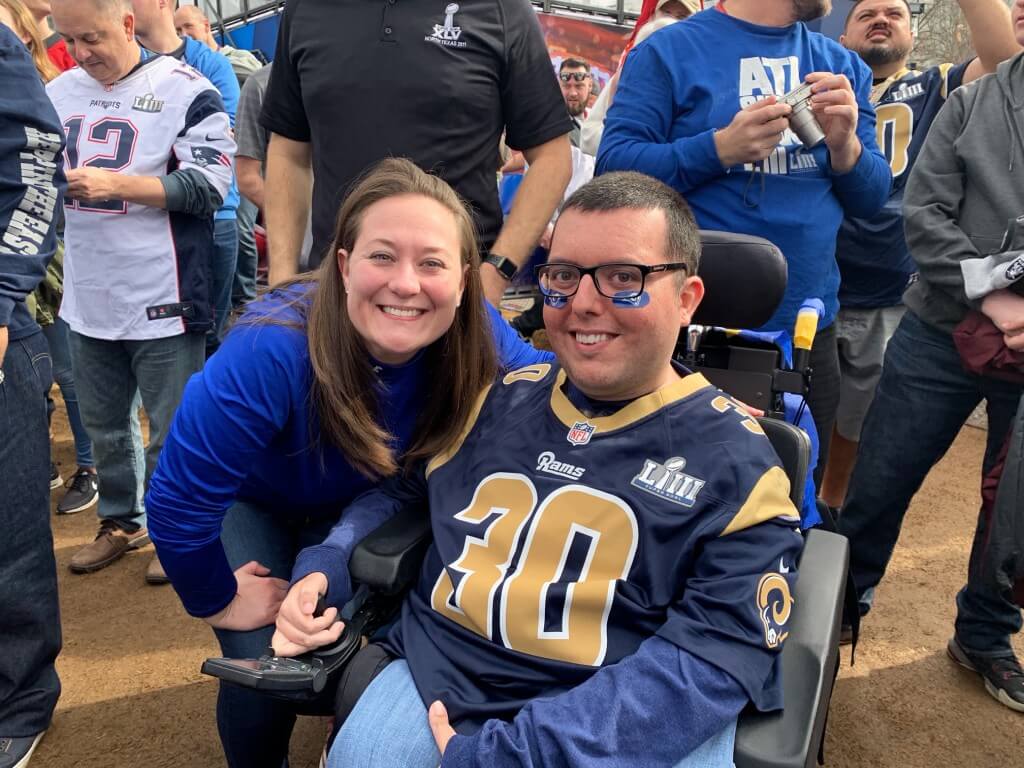 With Becci of Tattling Tourist

.
My mom and I started getting a bit hungry, so we went inside the CNN Center. The CNN Center has a massive food court with all kinds of options, but most of them had a very long line. We somehow ended up finding a burger place with no line, so chose that. I had a veggie burger and it was really good.
. 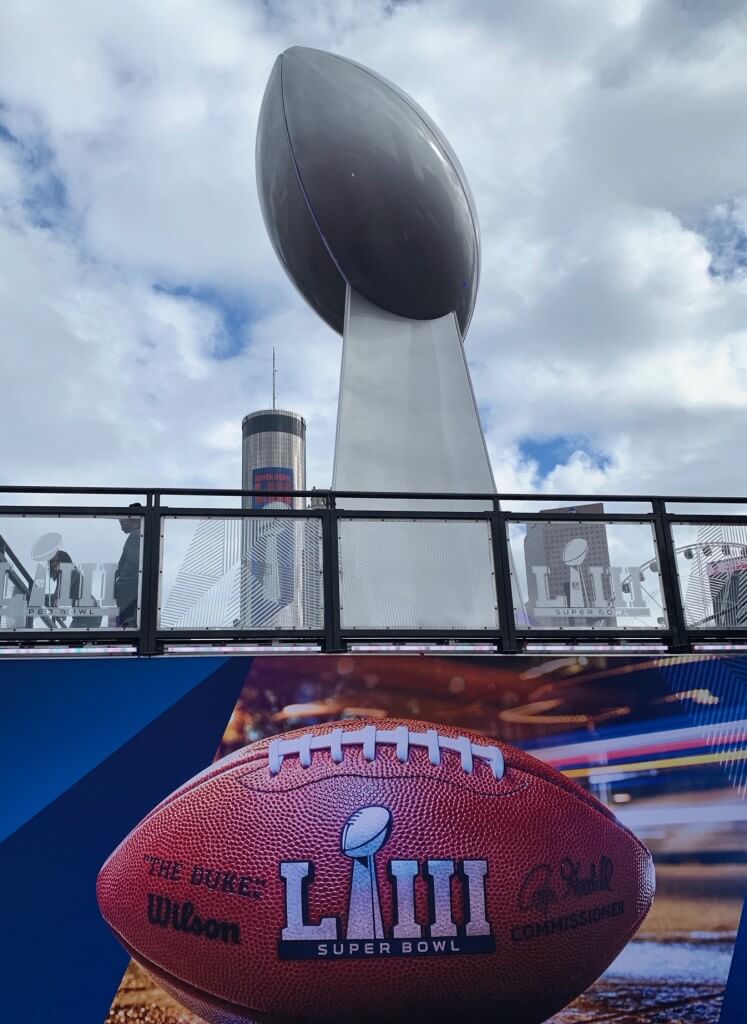 .
At this point, we had about three hours until the start of the game, so we started making our way to the main event. Before actually entering the stadium though, we visited the Super Bowl Experience Driven by Hyundai. In the eight days leading up to the Super Bowl, this interactive indoor fan experience was open to the public, but on the day of the Super Bowl it was only open to ticket holders. This was great because the crowds weren’t too big and admission was included with our Super Bowl tickets. What a nice added bonus!
. 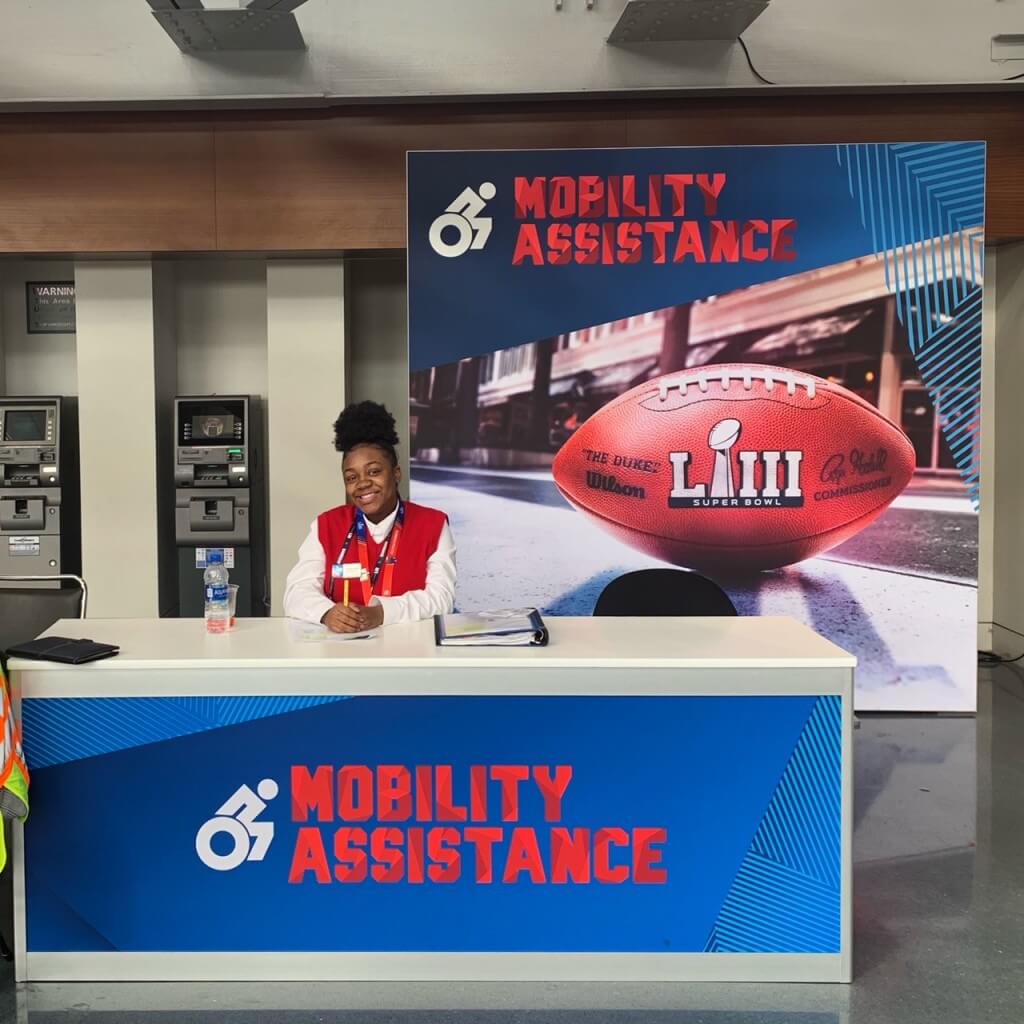 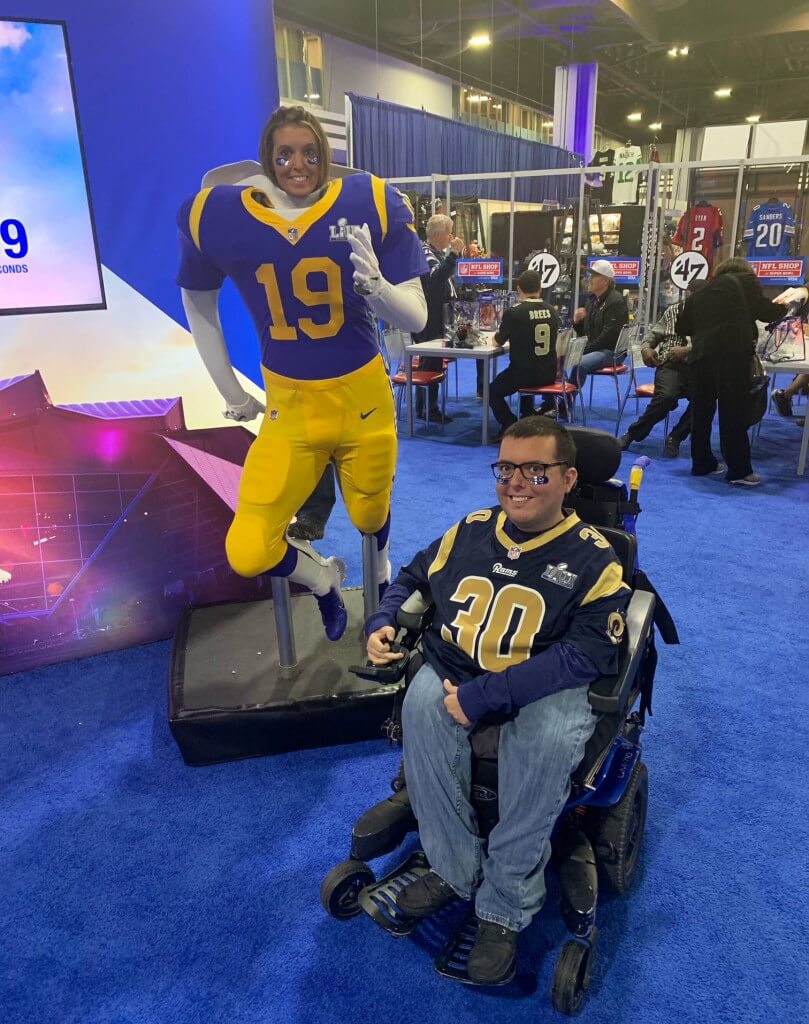 .
The Super Bowl Experience Driven by Hyundai was an interactive theme park celebrating all things Super Bowl. Inside the Georgia World Congress Center, there were immersive exhibits and games, all 52 Super Bowl rings were on display, and you could even take photos with the Vince Lombardi Trophy. There was also a huge souvenir shop and food options as well. We were at the Super Bowl Experience Driven by Hyundai for a little over an hour and it was quite the experience. There were so many cool interactive things to do and by the time we left, my anticipation for the game was at an all time high. I couldn’t believe that I was about to actually go to the Super Bowl!
. 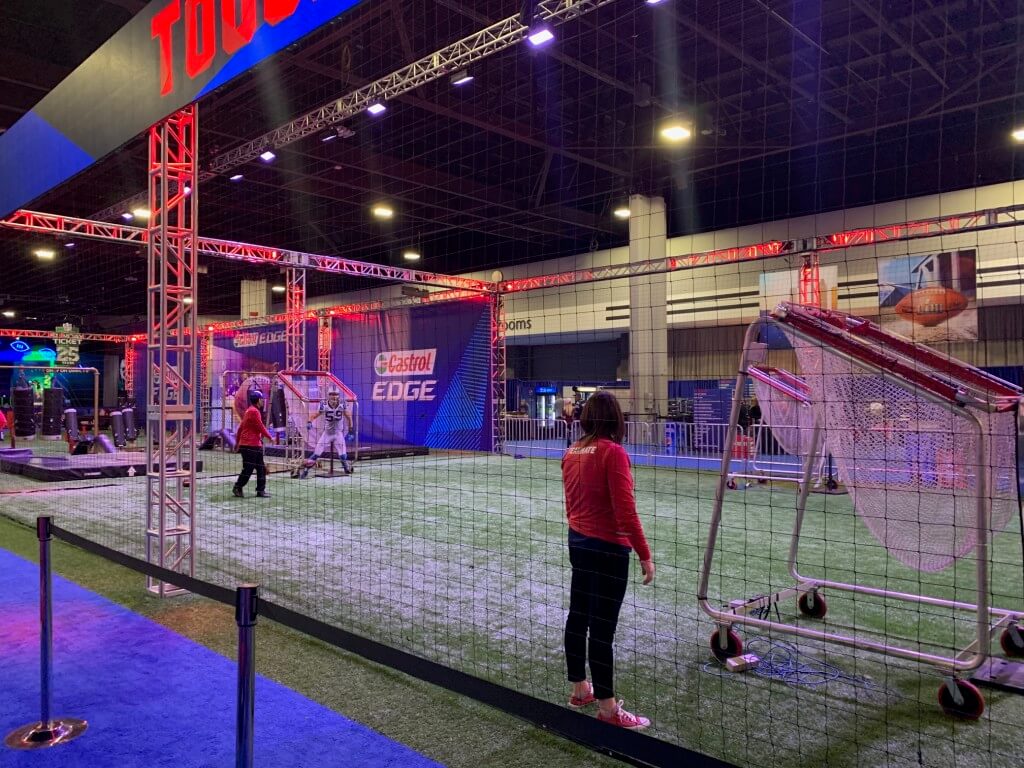 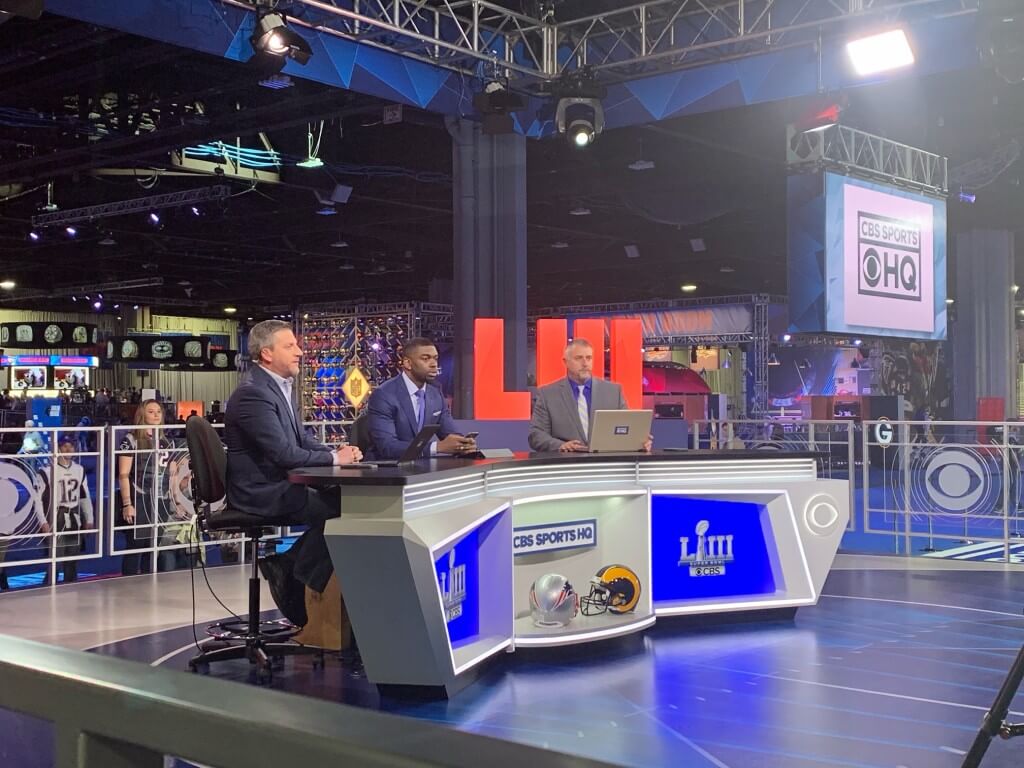 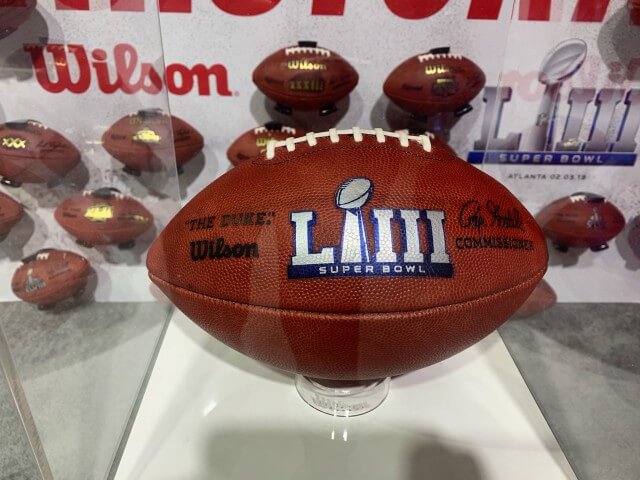 .
Next, it was time for the big event – the Super Bowl! We made our way through a security check and into Mercedes-Benz Stadium. Our seats were in section 133, which was the lower level, so they were easy to get to. We immediately made our way to our seats and were thrilled with how great they were! We had a perfect view of the field and the accessible seating was spacious enough for us to be comfortable the entire game.
. 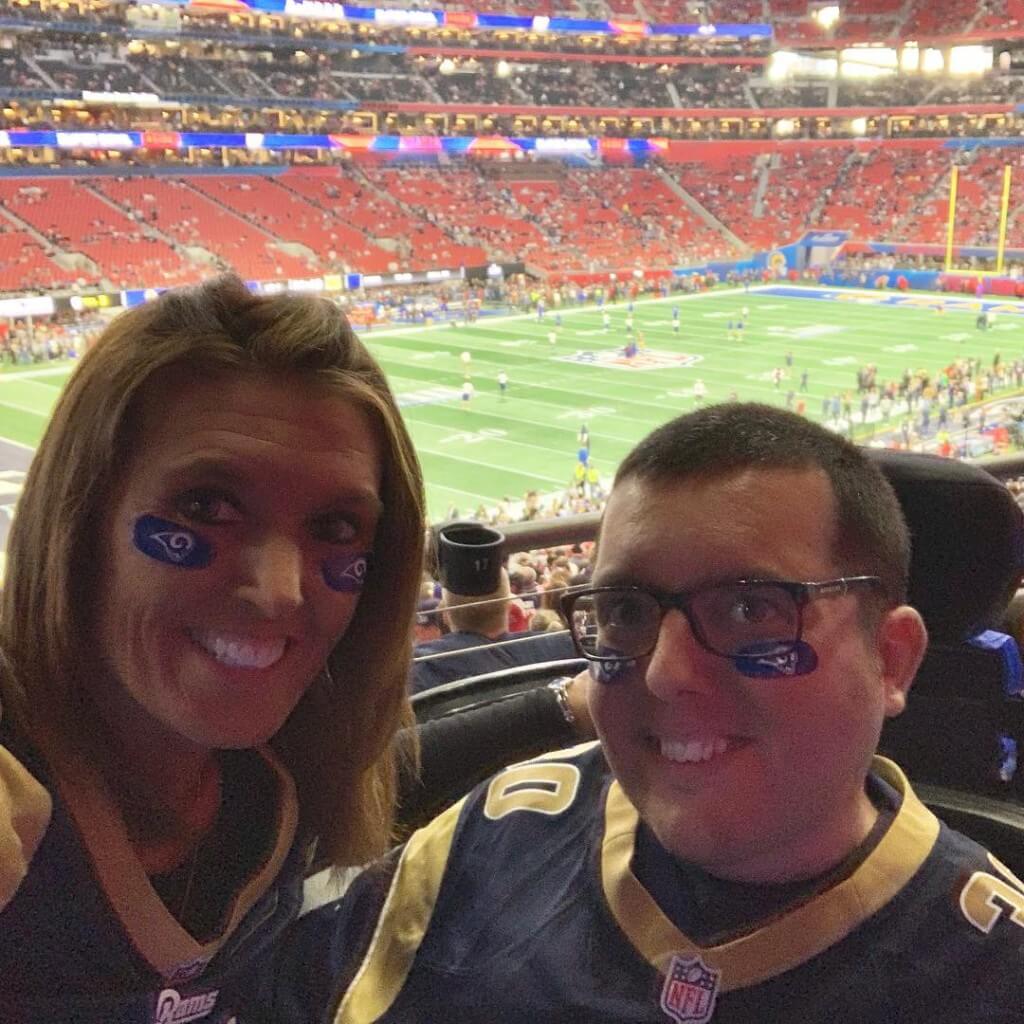 .
After getting settled into our seats, we enjoyed people-watching as everyone came in the stadium. We were looking for celebrities and all of a sudden, none other than Evander Holyfield sat right in front of us. You probably already know who Evander Holyfield is, but if not, he is a world-famous professional boxer and four-time world heavyweight champion. Everyone near us started quickly coming up to him and asking for photos with him. He took photos with everyone and then, without us even asking him to, he came up to our seats and took a photo with us. We talked for a minute and he was incredibly nice. You truly never know who you’ll see at the Super Bowl.
. 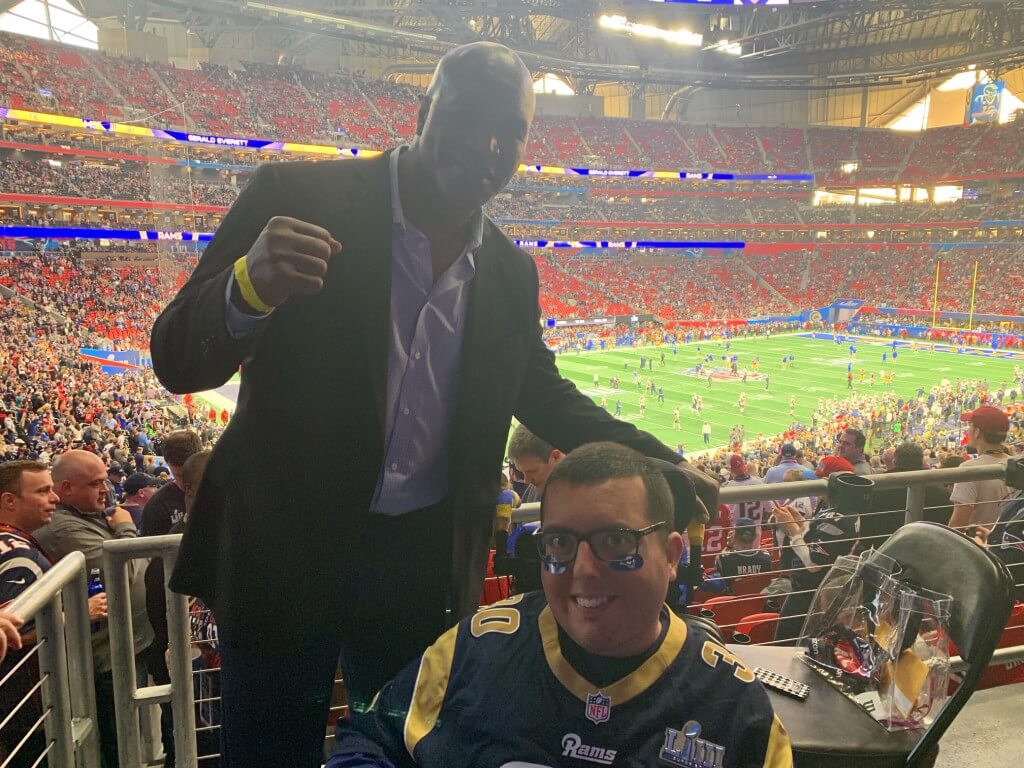 .
Soon after our celebrity encounter, it was time for the game to begin. The Los Angeles Rams and New England Patriots took the field and Gladys Knight sang the National Anthem beautifully. There weren’t many points scored in the first half of the game (or in the whole game actually), but I was looking forward to the halftime show with Maroon 5. Most people, according to Facebook anyway, didn’t care for their performance, but I thought they did a fantastic job. The halftime performance was exciting and I loved when they used the drones to spell out “One Love” inside the stadium. I guess the performance was just better in person instead of on TV, but I loved it.
. 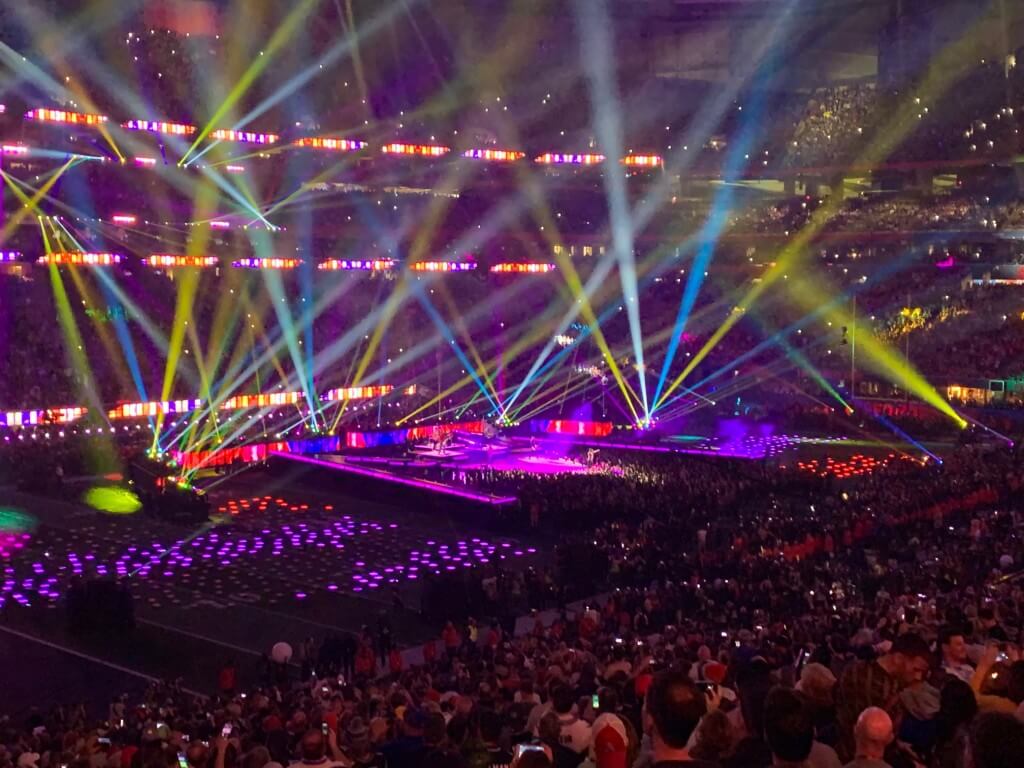 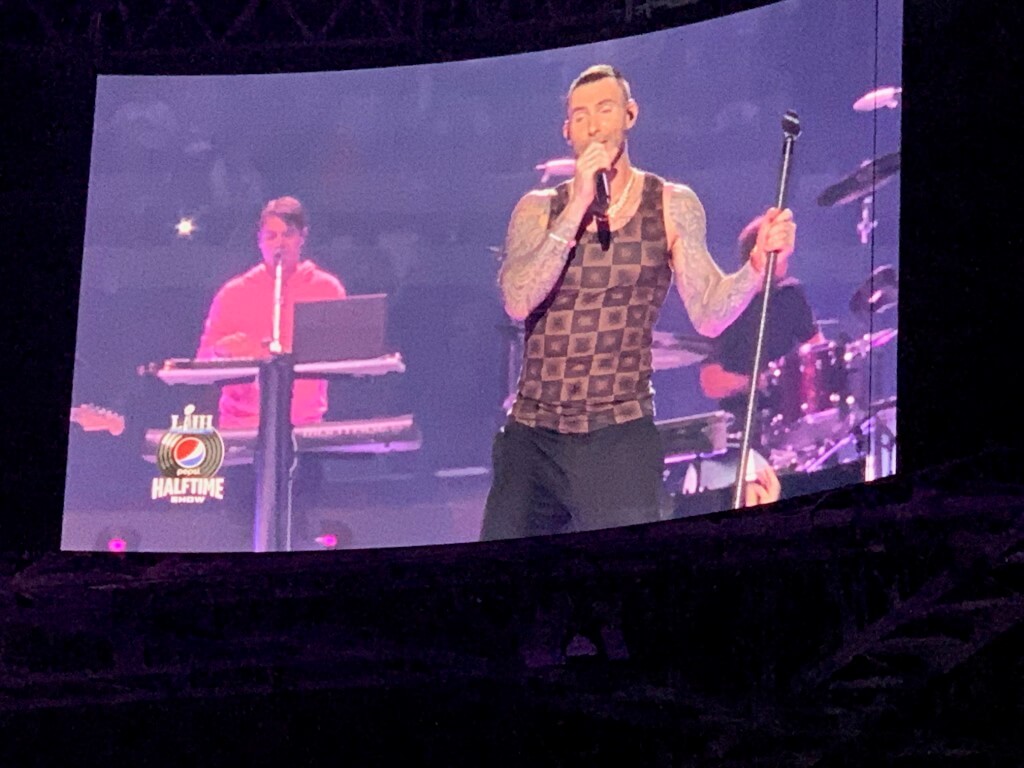 .
There was a companion care restroom within about 20 feet of our seats, which was great. All kinds of food and drink options were nearby as well, and the prices were very reasonable. Mercedes-Benz Stadium is known for having the best prices for food and drinks in the country, and it certainly did. We got a slice of pizza, a bag of popcorn, and soda in a Super Bowl souvenir cup for just $9 total.
. 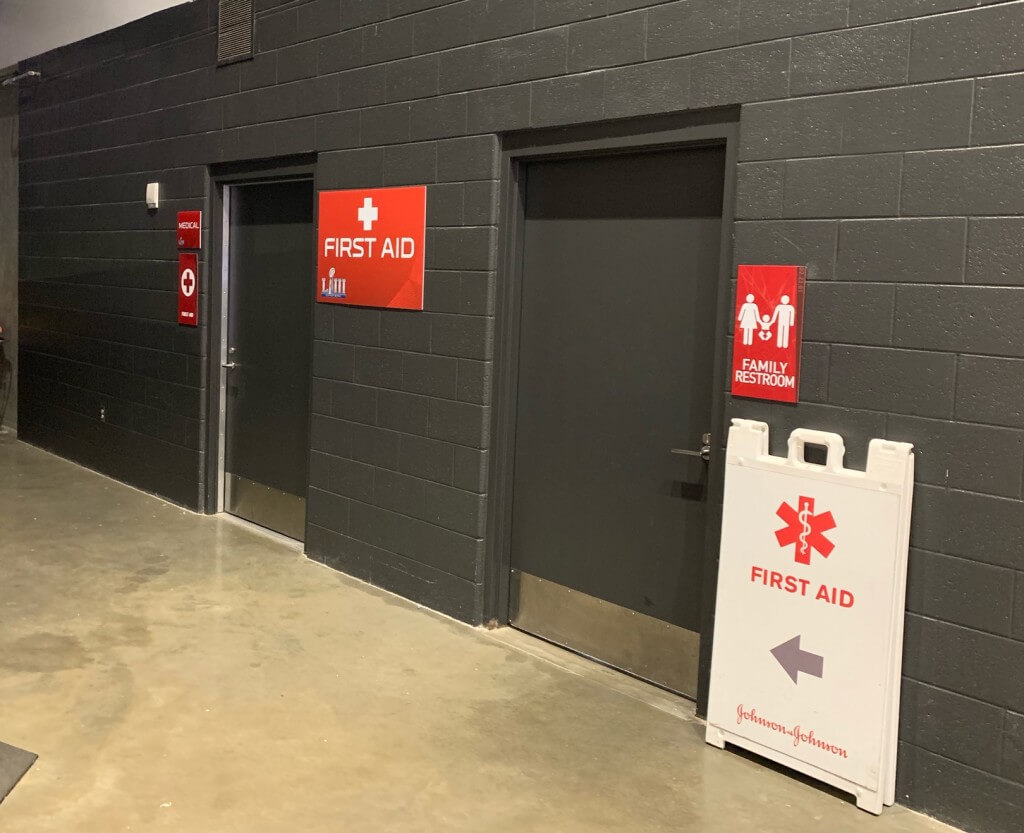 .
The Patriots ended up winning the game with a final score of 13-3. I was wearing a Rams jersey, but really didn’t care who won. When the Patriots won, confetti came falling down and since about 80% of the people in the stadium were Patriots fans, they all erupted in cheers. It was a joyous moment and I was so happy that I had the opportunity to attend Super Bowl LIII. Even though it wasn’t the most exciting game, with only 16 total points scored, it really couldn’t have been better. It surpassed all of my expectations and showed me that football can actually be fun. Who knows… maybe this won’t be the only Super Bowl that I ever go to.
. 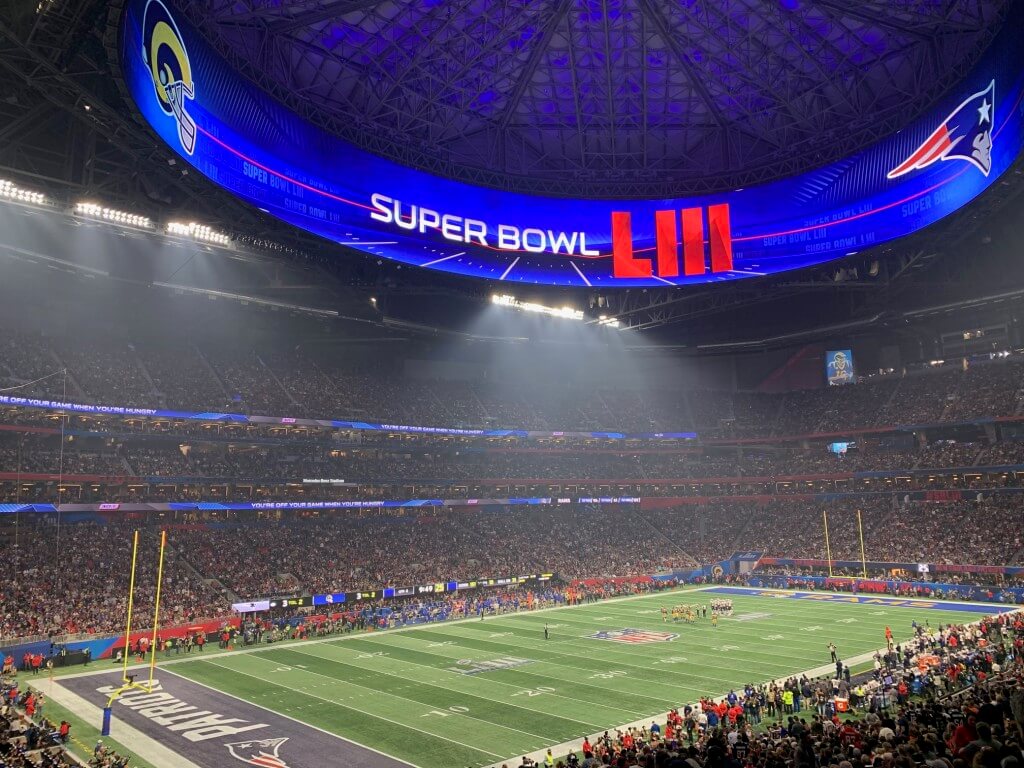 • Sit back and wait for the letter to come in the mail saying if you’ve won the opportunity to buy tickets at face value. My letter came toward the end of October.