If you have been following my blog for a while, then you probably know that I am a Disney fanatic. I first visited Walt Disney World at the age of four, revisited the parks pretty much every year my entire life, and I even did my college internship at Disney World. To say that I’m obsessed with Disney would be an understatement.

Over the course of my many visits, I’ve stayed at a few of Disney’s resorts. I have stayed at Pop Century Resort, Art of Animation Resort, and last year, I stayed at Disney’s Yacht Club Resort. There are a few other resorts that are on my Disney bucket list and I’d really love to stay at, including Animal Kingdom Lodge and the Polynesian Village Resort, but the one resort that has always been at the top of my wish list is Disney’s Grand Floridian Resort.

The Grand Floridian is Disney’s most luxurious resort and an absolute icon of Walt Disney World. It’s home to a AAA Five Diamond restaurant, wheelchair accessible rooms with a view of the castle at Magic Kingdom, and that special Disney charm that you can’t get anywhere else. During my recent trip, I finally got to experience the magic of staying at the Grand Floridian and I’m happy to say that it lived up to all of my expectations. Here’s my Grand Floridian review and 6 reasons why I absolutely love this resort as a wheelchair user – 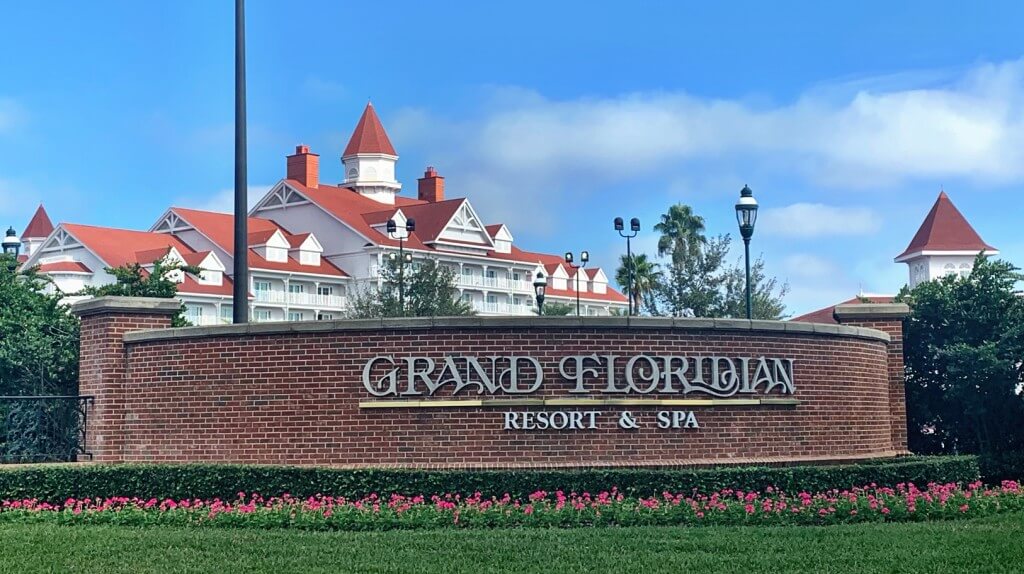 6 Reasons Why I Love the Grand Floridian

As soon as I rolled through the doors of the Grand Floridian, I was immediately entranced. The lobby was beautiful with fresh flowers, gorgeous chandeliers hanging over the five-story atrium, and there was even a man playing the piano in the middle of the lobby. It was Victorian elegance at its best! 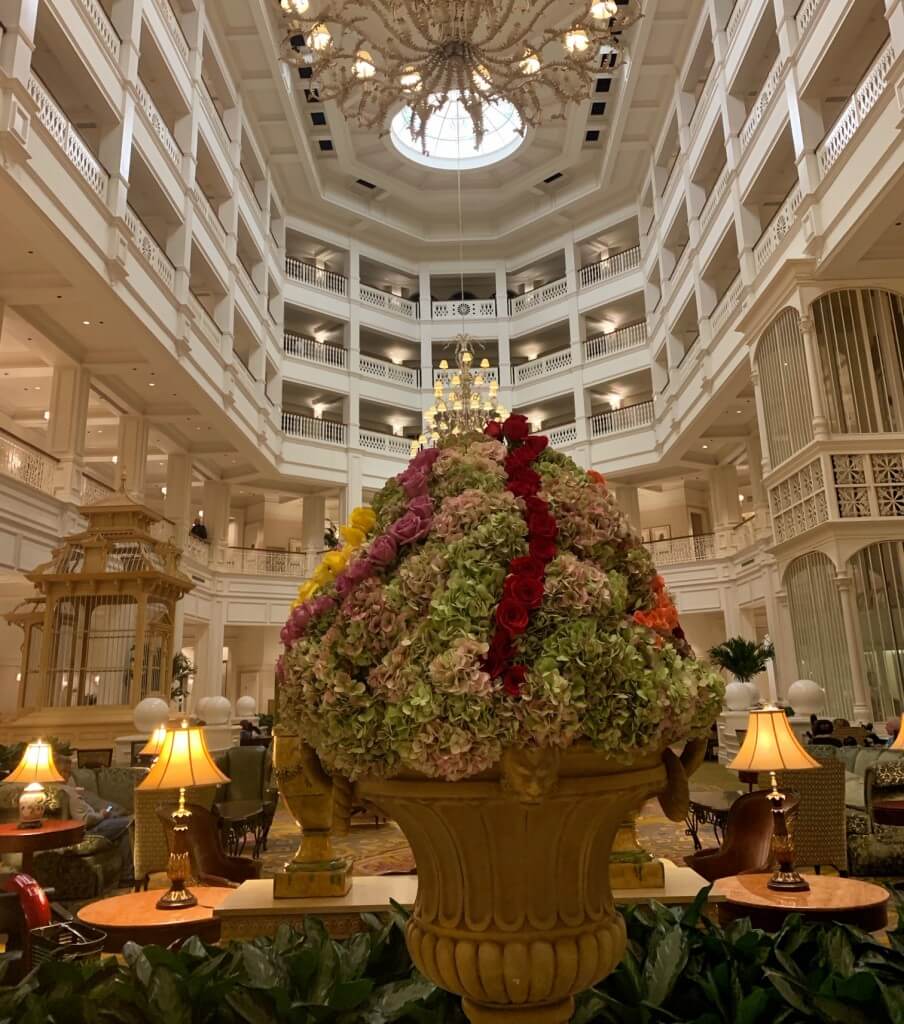 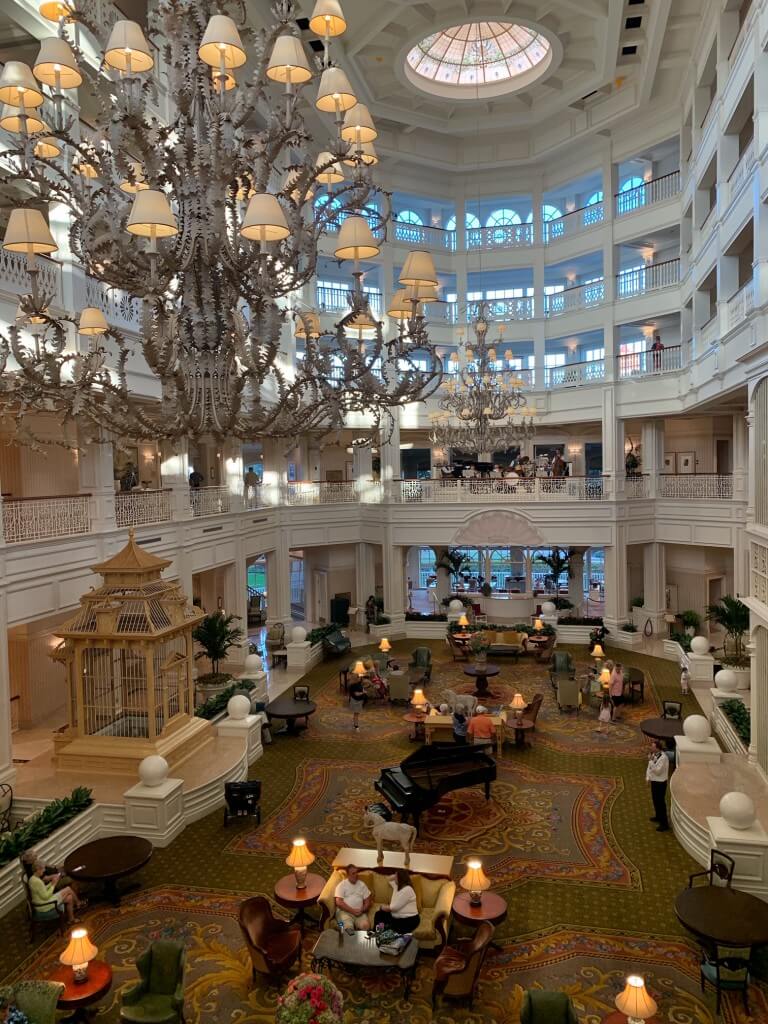 The cast members (this is what Disney calls its staff) were incredibly kind, and they were certainly dressed the part as well in their cream colored Victorian clothing. Whether you are actually staying at the Grand Floridian or not, you should visit and just relax in the lobby for a bit. In the evening, the Grand Floridian even has its own orchestra that plays jazz and traditional Disney songs from one of the upper levels, but you can listen to them from the lobby or if you feel like it, dance to some great tunes. 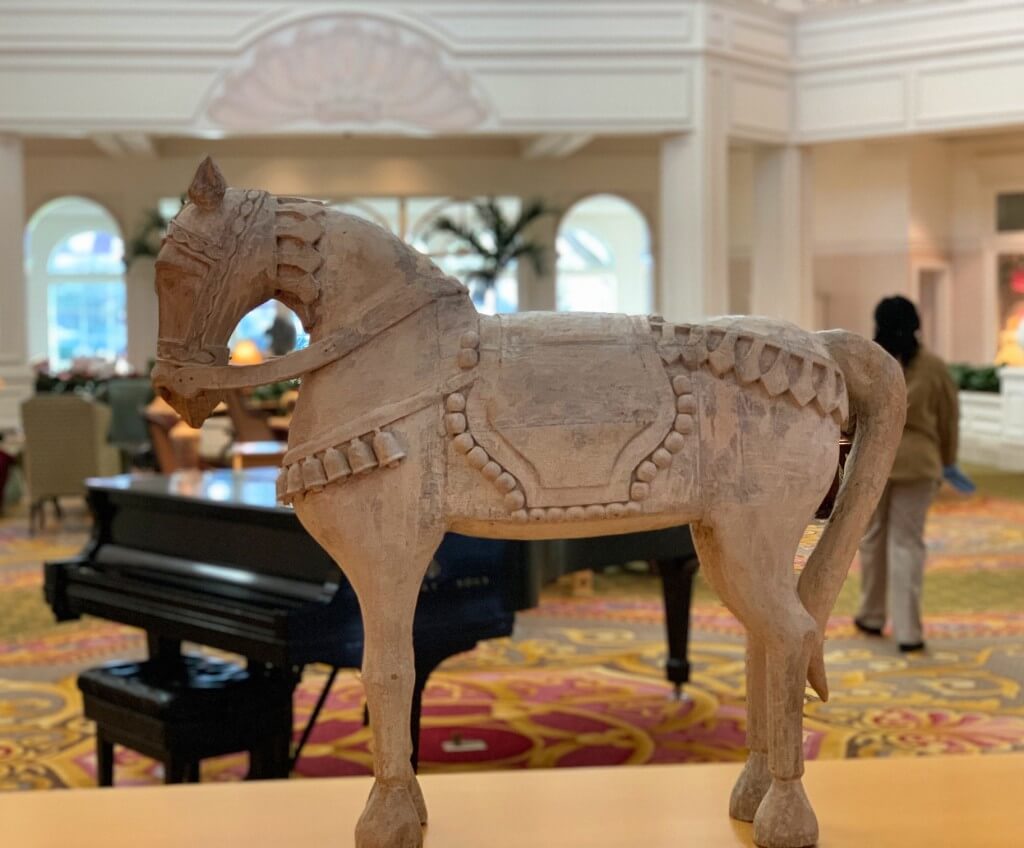 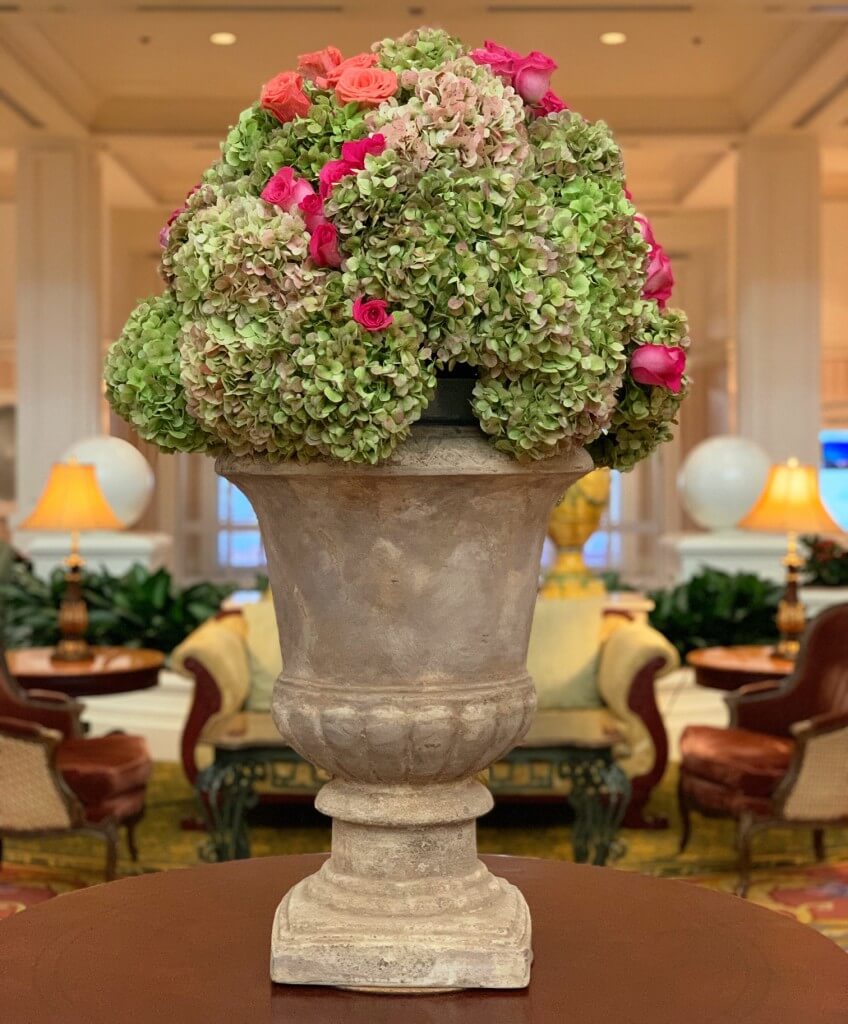 The Grand Floridian has a variety of accessible rooms, and I stayed in a theme park view accessible room. The resort has quite a number of different buildings and my room was in the Conch Key building. There were two queen beds in my room, a refrigerator, a TV, enough space to easily maneuver around, and a balcony. From the balcony, I could actually see Cinderella’s Castle at Magic Kingdom. It was hands-down the best view from a room that I’ve ever had. The only potential issue with this accessible room was that the beds did have a block bed frame, so a hoist/hoyer lift would not be able to roll under the bed. I didn’t use a hoyer lift on this trip, so that wasn’t an issue, but on my past Disney trips where I’ve used a lift, the cast members have always been more than happy to figure out a solution that worked for me. If you will be bringing a hoyer lift, just let them know in advance. 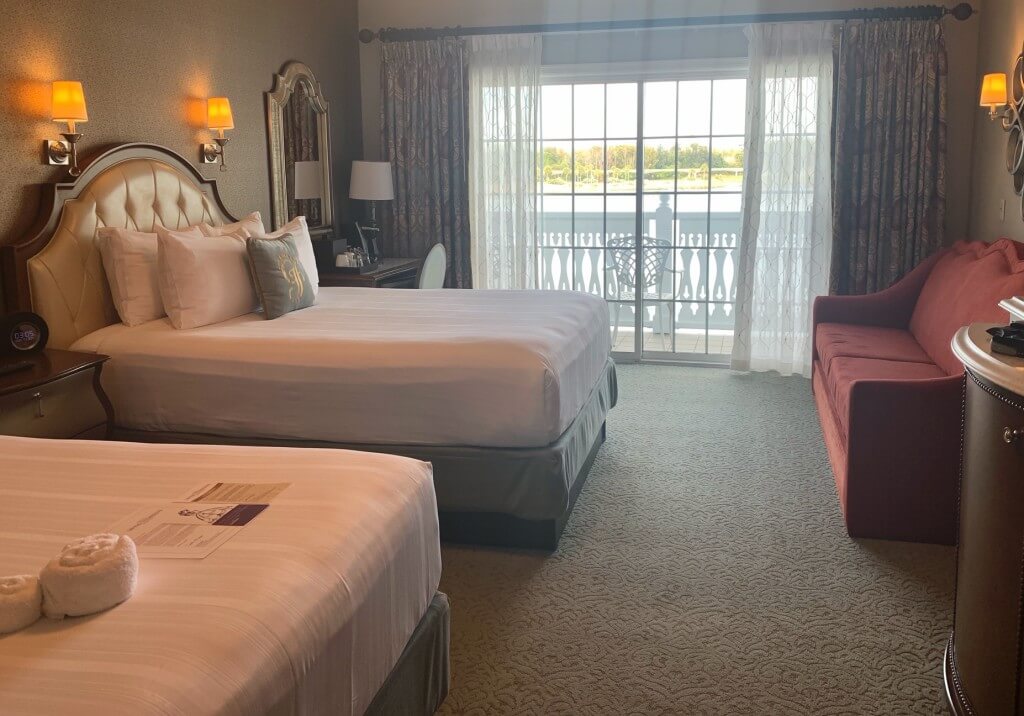 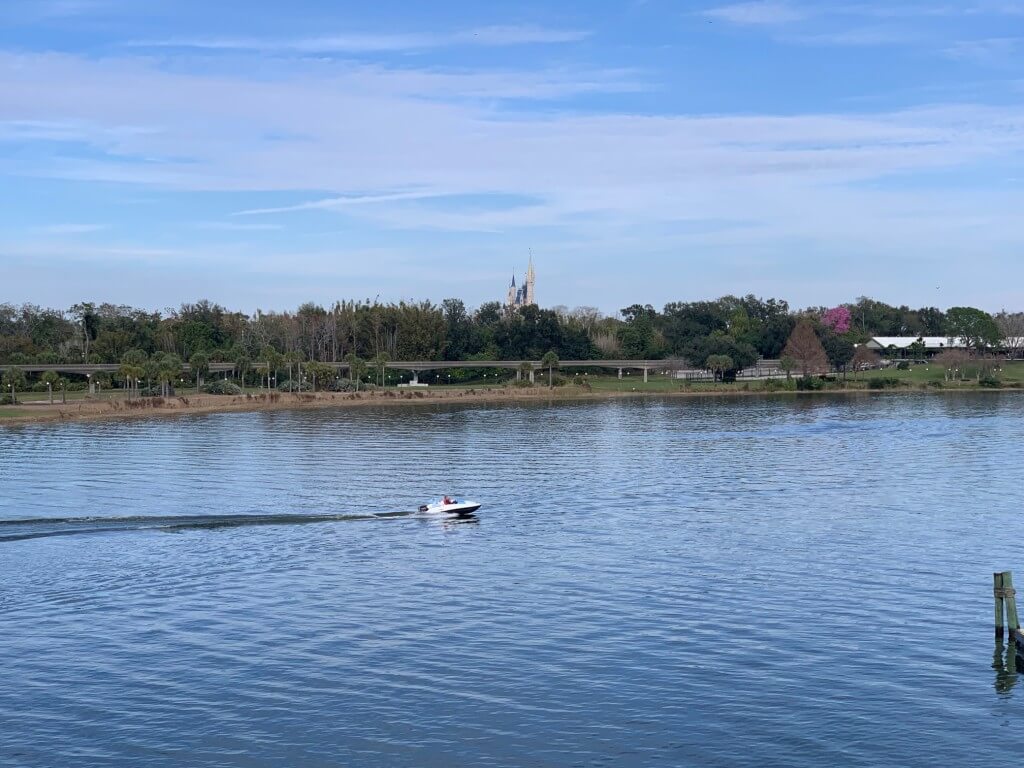 View from my room. See Cinderella’s Castle in the distance??

In the bathroom, there was a great roll-in shower with a fold-down seat and a handheld shower sprayer. There was also a pull-under sink and grab bars around the toilet. The bathroom couldn’t have been any better for accessibility in my opinion. 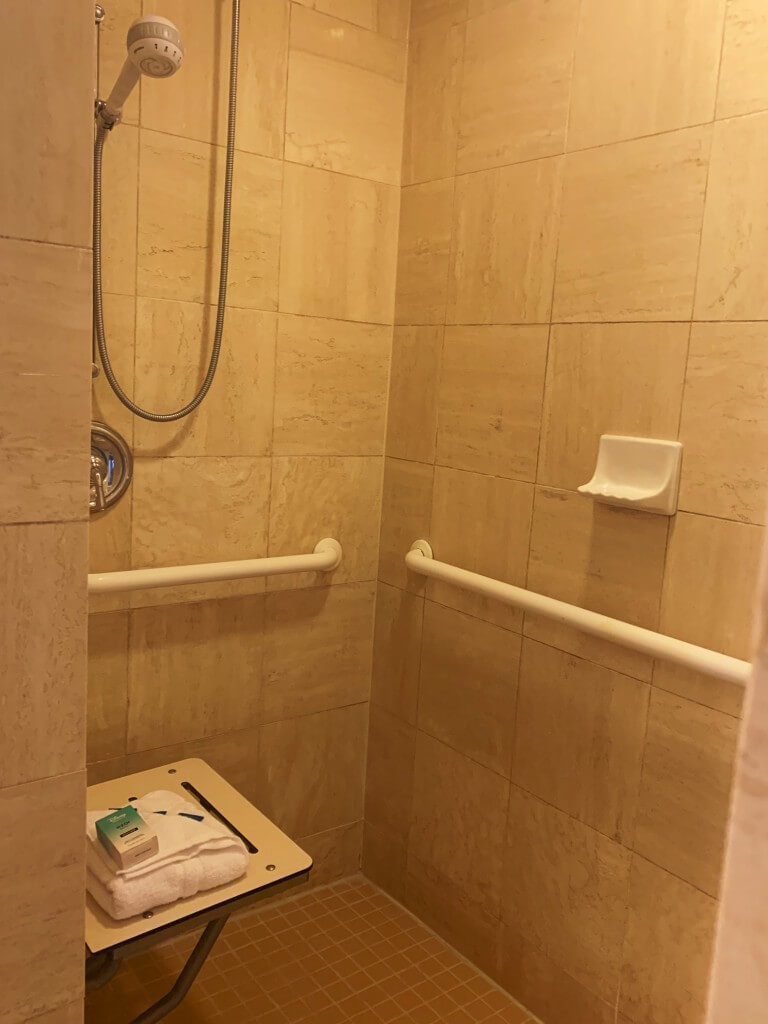 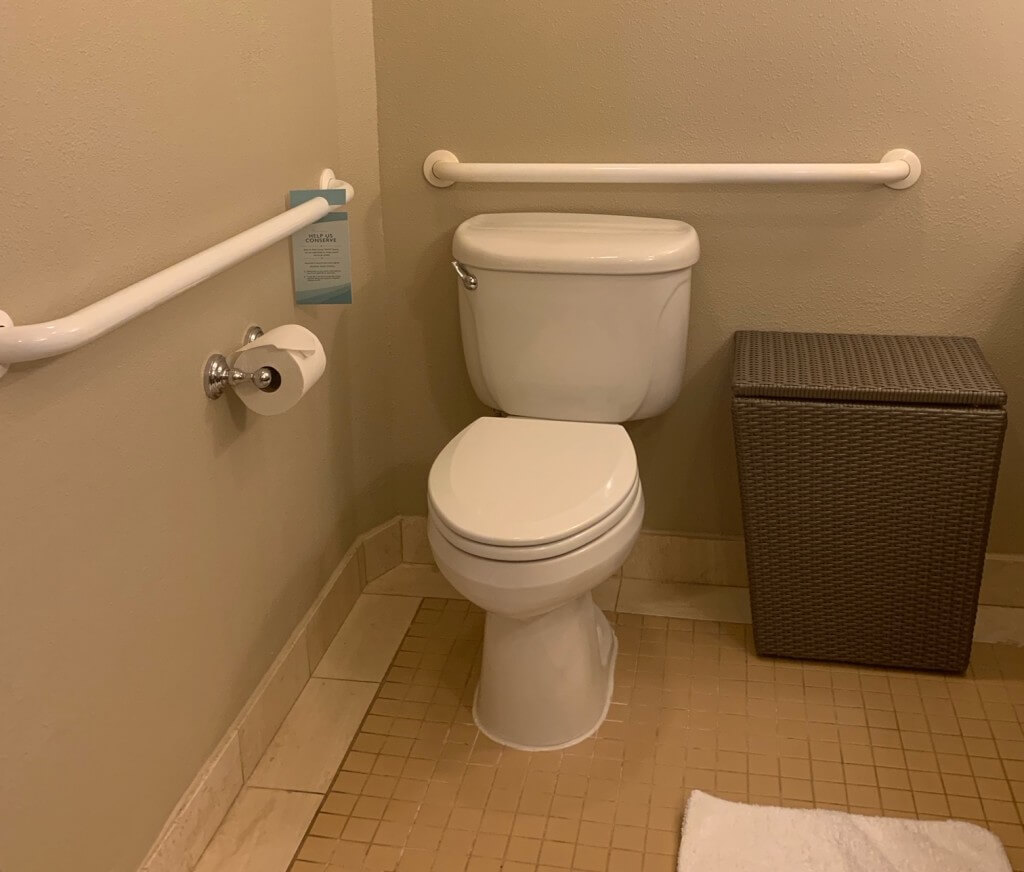 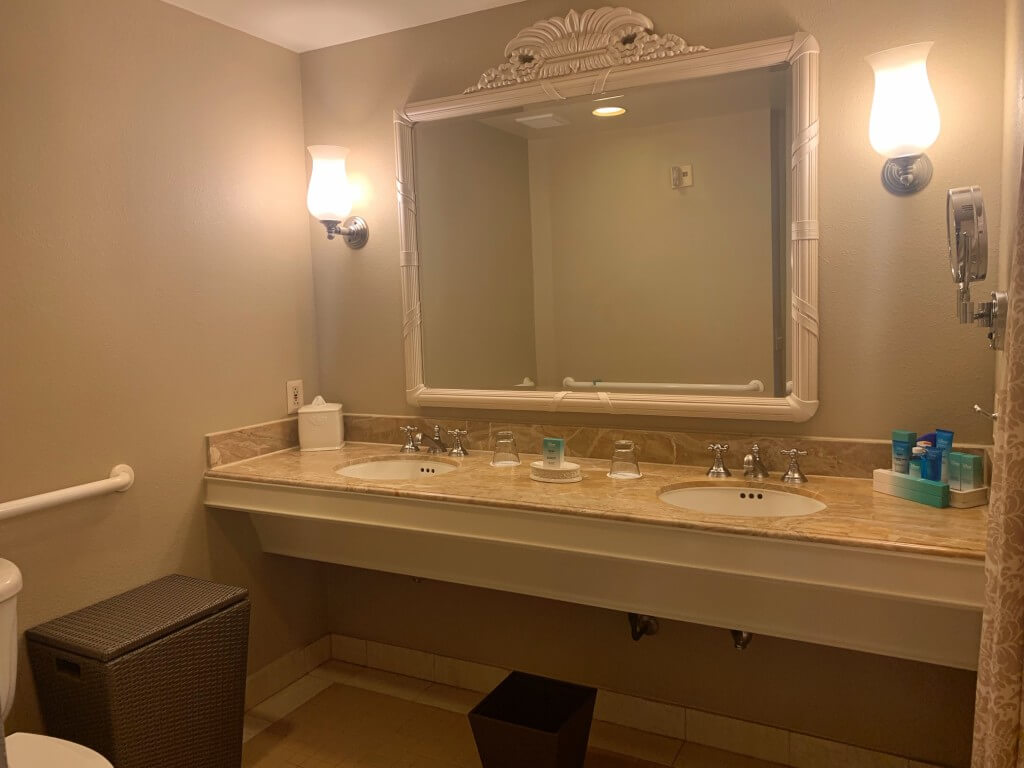 There are two pools at the Grand Floridian and I’m thrilled to let you know that both of them have a pool lift! The Beach Pool is a 111,261-gallon pool and it overlooks Seven Seas Lagoon. It also has a waterslide and a waterfall, and if you’d like to splash around a bit, there’s a nearby aquatic play area. You could use a shower chair, if you have one, and roll through the small play area for some fun in the sun. 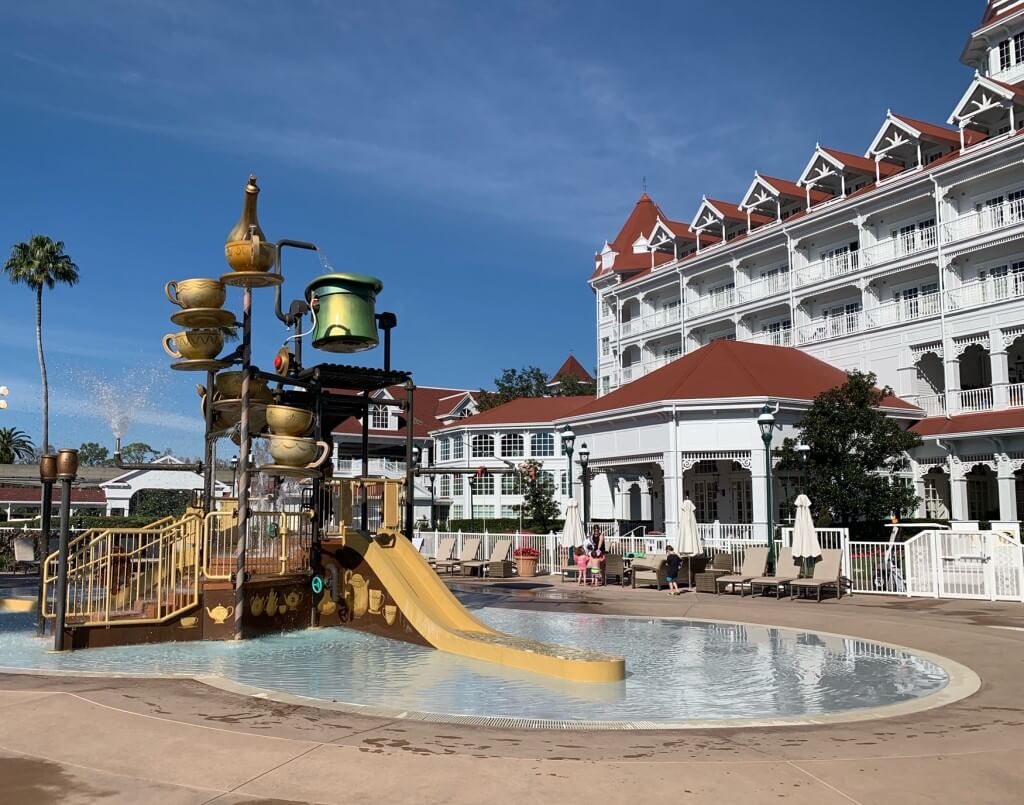 The Courtyard Pool, in addition to the pool access lift, has zero-entry, so you could just sit in your shower chair and roll straight into the pool if that’d be easier than transferring to the pool lift. Next to the Courtyard Pool is a hot tub and guess what… even it had an access lift! Wheelchair users will have no trouble getting into the water at the Grand Floridian! 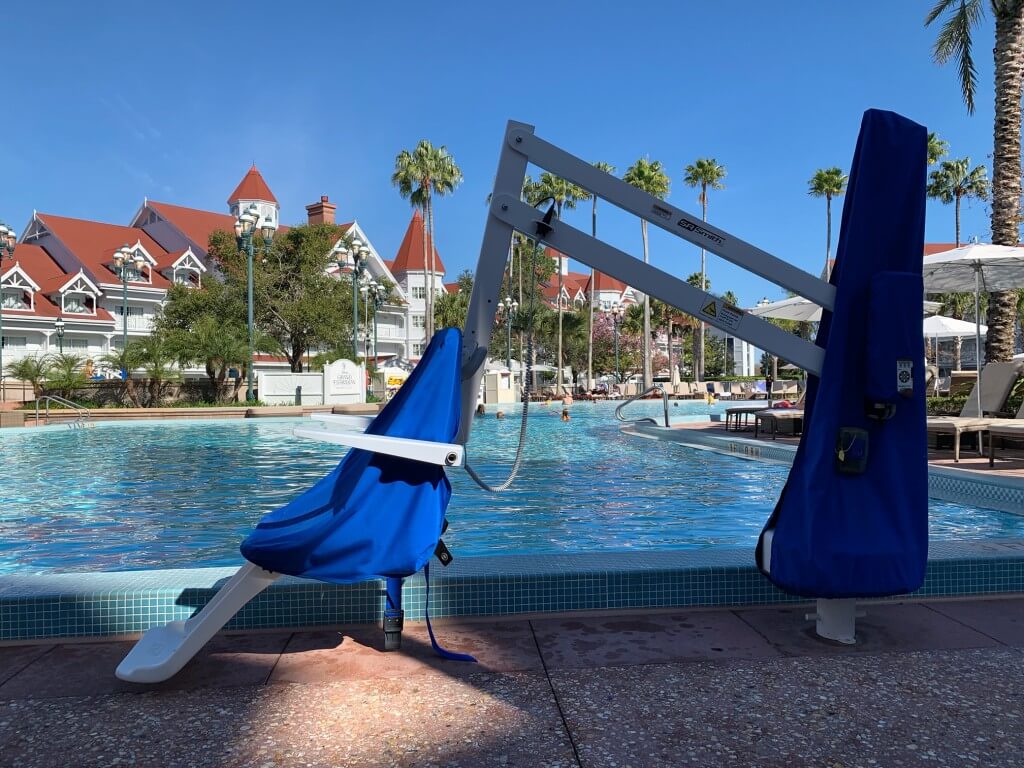 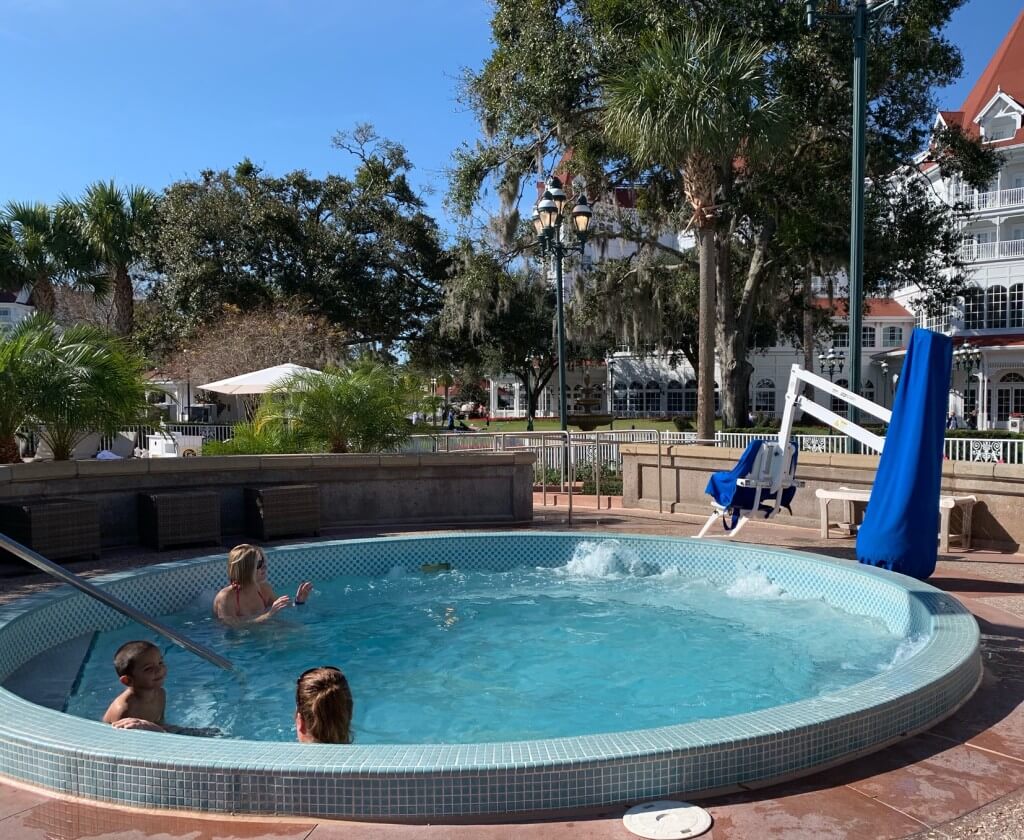 Disney’s Grand Floridian Resort and Spa offers some of the best dining choices across all of Walt Disney World. The resort’s most well-known restaurant is easily Victoria & Albert’s. It’s been a AAA Five Diamond Award recipient since the year 2000 and if you’re looking for the ultimate fine-dining experience, this is it… if you’re lucky enough to score a reservation, that is. While it is pretty tough to get a reservation at Victoria & Albert’s, you might have better luck at Cítricos or Narcoossee’s. Cítricos has American food infused with Mediterranean flavors and Narcoossee’s is a waterfront restaurant specializing in coastal cuisine. I didn’t get a chance to dine at any of these restaurants for dinner during my stay, but I have heard phenomenal things about each of them.

While I didn’t have dinner at the Grand Floridian, I did get to enjoy a marvelous character breakfast on the last morning of my stay at the resort’s 1900 Park Fare. I may be 29 years old, but I’ll never be too old for a character breakfast. It is one of my favorite things to do at Disney World and I’ve done several of them over the years, but this was my first time at the Supercalifragilistic Breakfast at 1900 Park Fare. 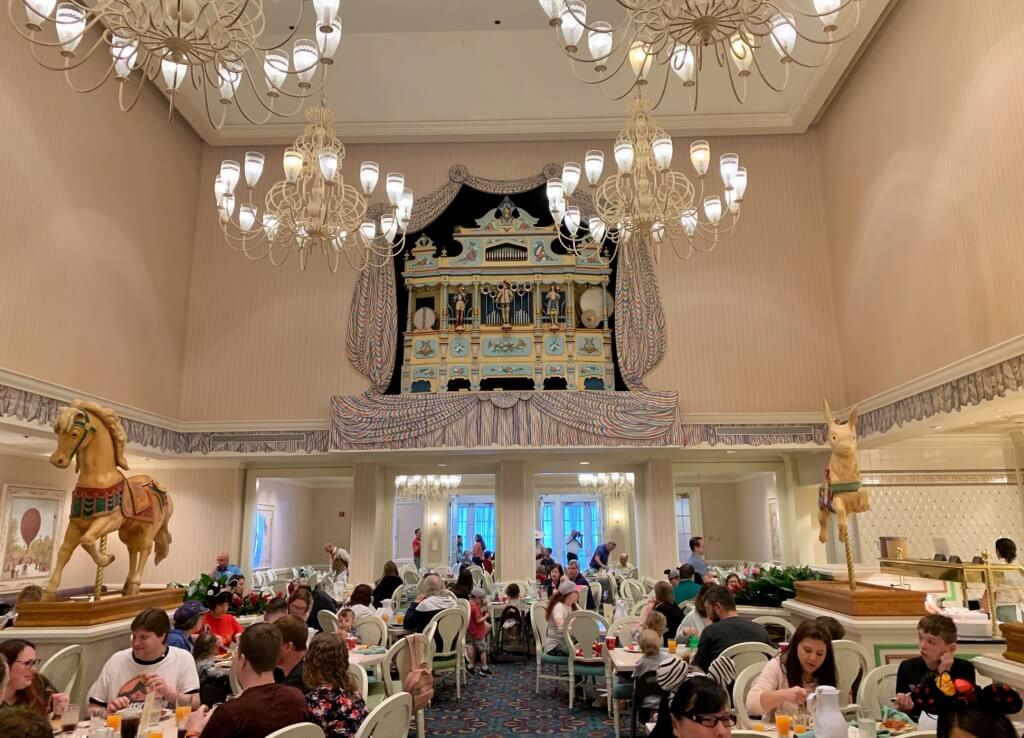 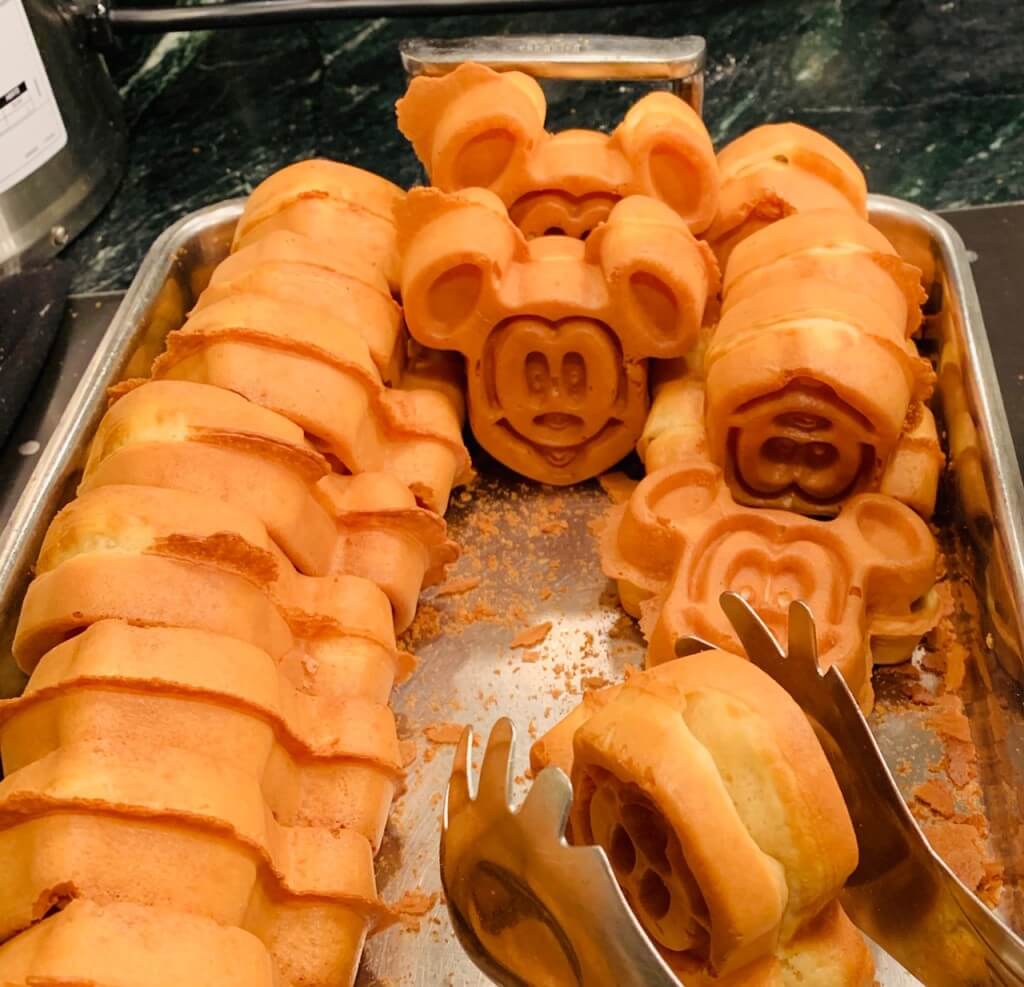 During breakfast, Mary Poppins, Alice, the Mad Hatter, and Winnie the Pooh made their way around the dining area and each one stopped by my table for a photo. I loved meeting them and the buffet breakfast was delicious! I’ve decided that Mickey waffles are my favorite food in the world. After we finished eating, we got to meet Tigger as well. This character breakfast is easily the best way to start any day at the happiest place on Earth! 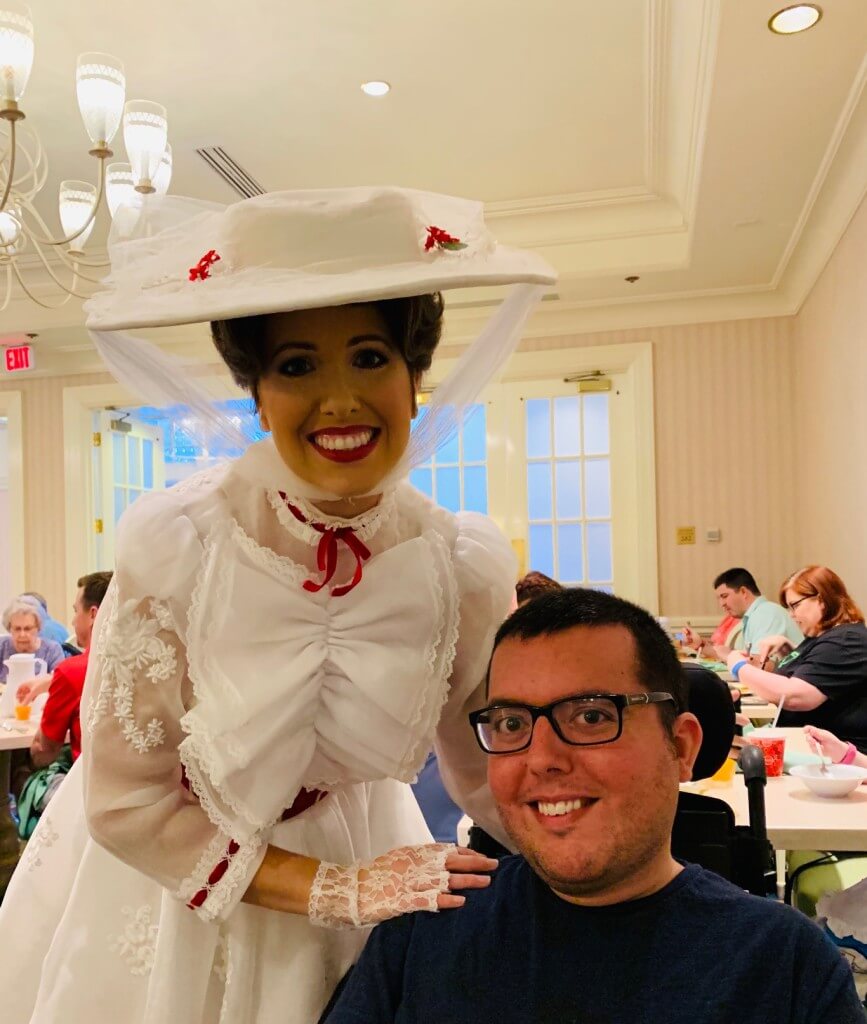 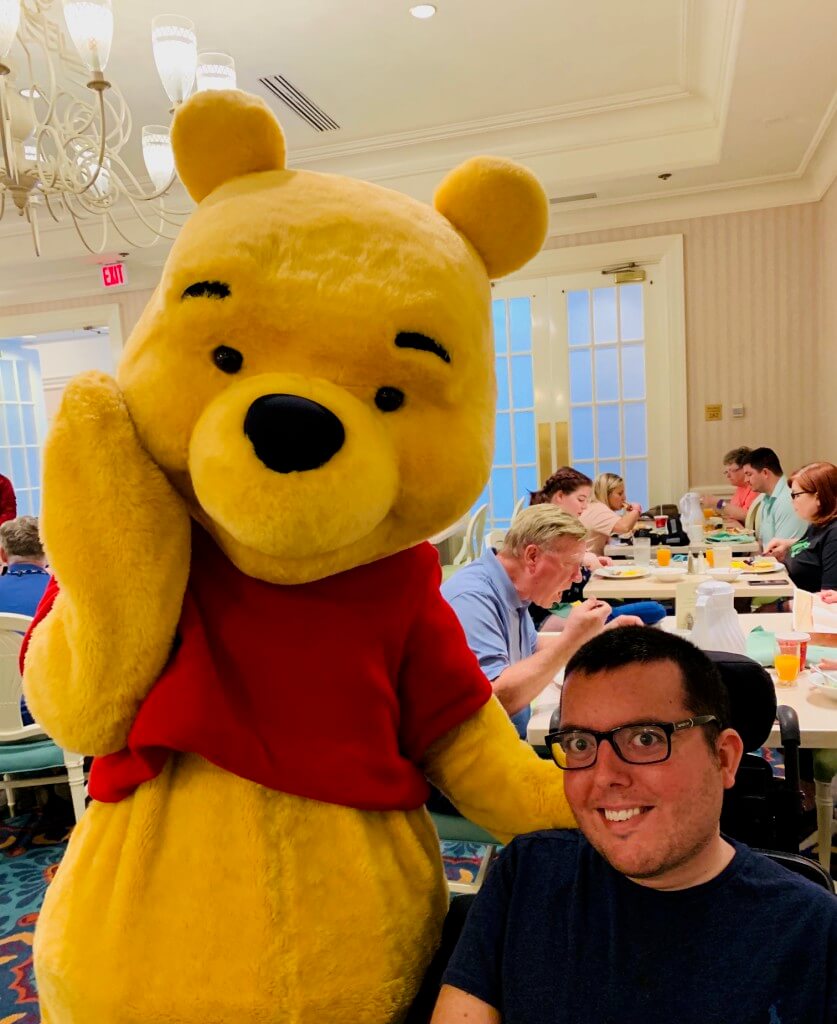 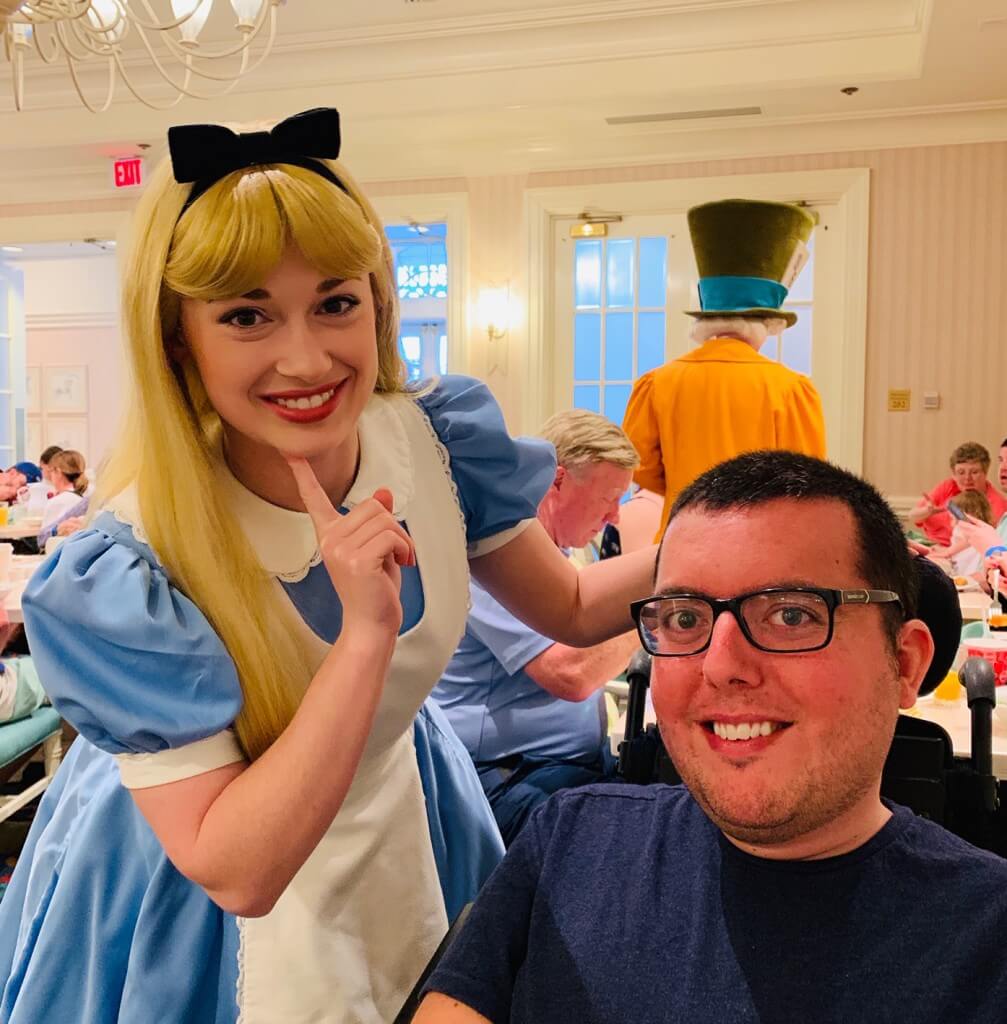 Trust me when I say that it has literally never been easier to get around Walt Disney World than when you stay at the Grand Floridian. We drove to Disney and when we arrived at the resort, we parked my van in the self-parking lot. I didn’t see my van again until we left Disney two days later. There are several transportation options from the Grand Floridian and luckily, they’re extremely accessible.

My favorite mode of transportation at Walt Disney World is the monorail and you can get on the complimentary monorail at the Grand Floridian. Magic Kingdom is only one stop away (about a two minute ride) and you can also get to Epcot with just one transfer. The monorails are wheelchair accessible with a ramp and the ride is smooth as can be. 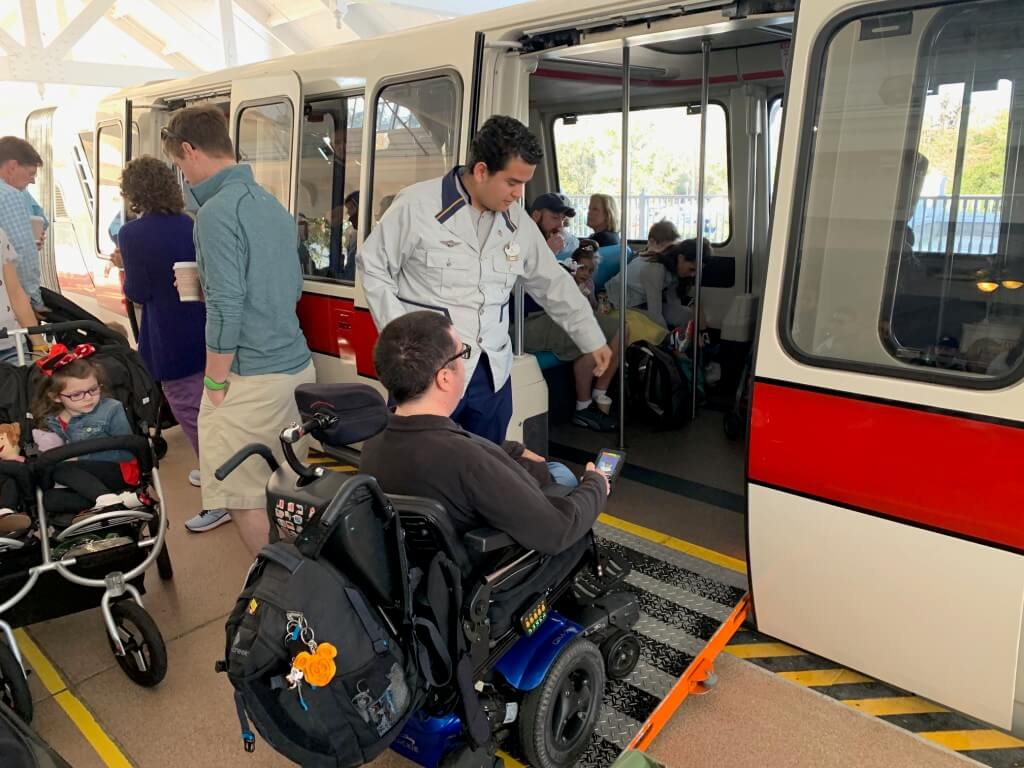 If you want to visit Hollywood Studios, Animal Kingdom, or somewhere else that the monorail doesn’t go to, you could take a complimentary bus from the Grand Floridian. On the first night of my stay, I went to Disney Springs on the bus and it was a quick and easy ride. All buses are wheelchair accessible with a ramp and tie-downs to secure a wheelchair. 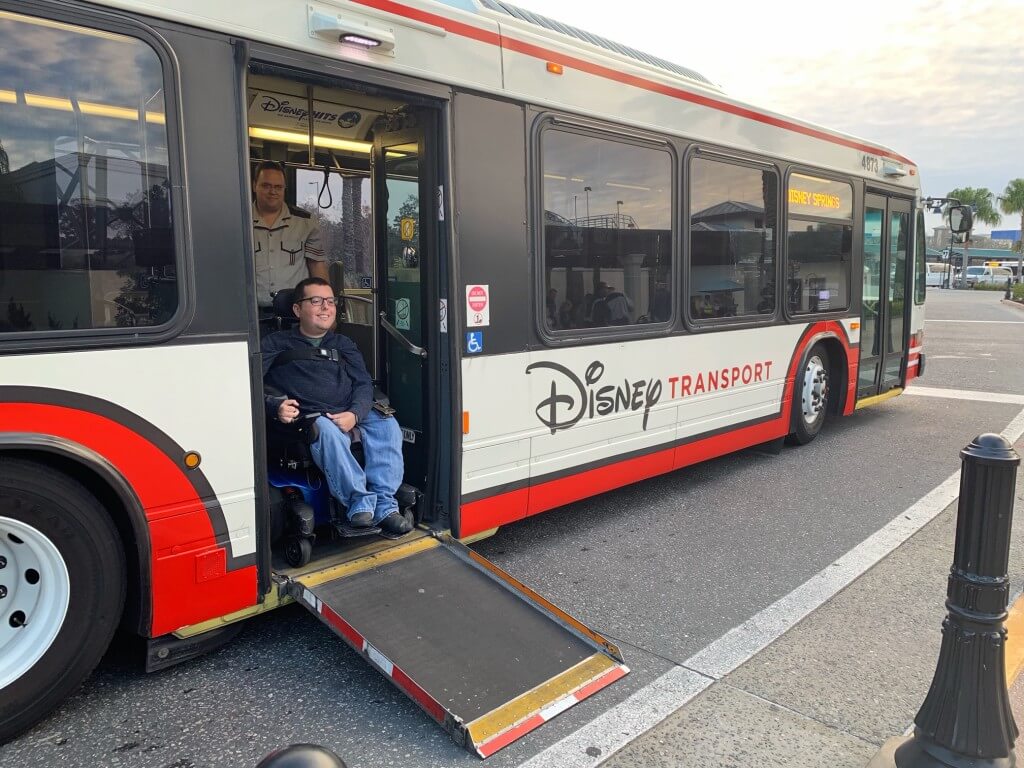 I already kind of mentioned this in the previous point, but it’s so great that it’s worth repeating. Perhaps the thing that I love about the Grand Floridian the most is its stellar location! I mean… YOU CAN SEE CINDERELLA’S CASTLE FROM YOUR ROOM!!! Does it get any better than that?! But seriously, Magic Kingdom is only a hop and a skip away, so you won’t find a resort with a better location than the Grand Floridian. Also, you can view the nightly Electrical Water Pageant or Magic Kingdom’s fireworks show from the resort. 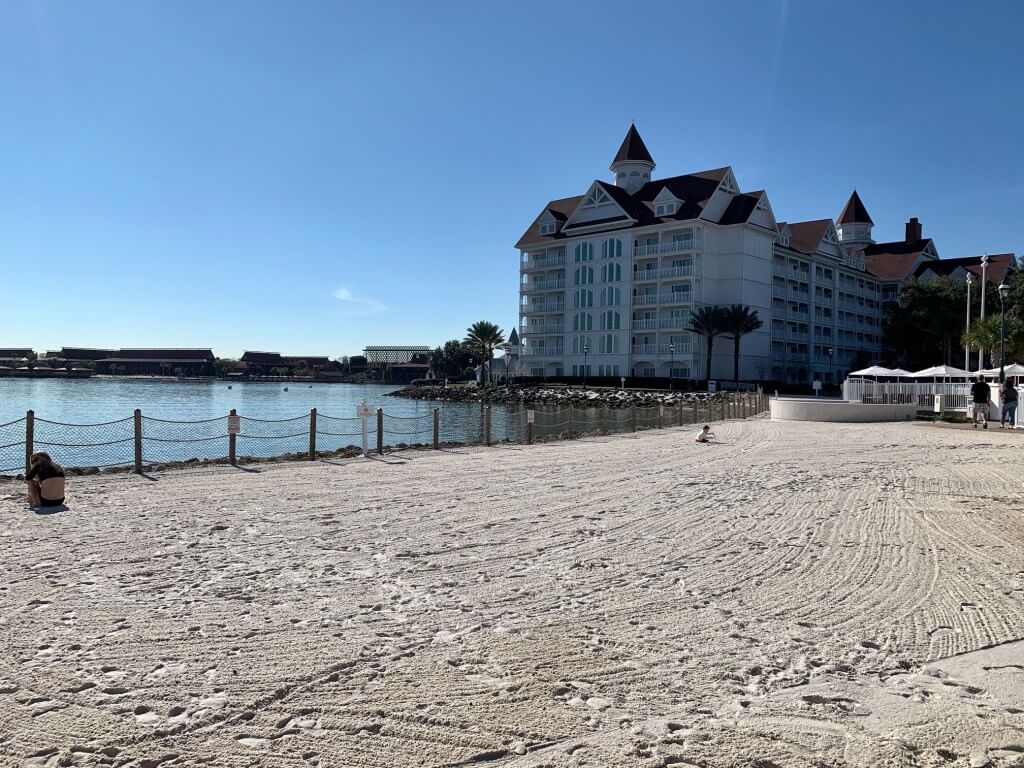 If you have been dreaming of the ultimate Disney experience and want to splurge for some truly out-of-this-world accommodations, there’s no better place to stay than Disney’s Grand Floridian Resort and Spa. From fun-filled character breakfasts to accessible pools and spectacular views, this Disney resort has everything to make your stay a magical one.

*Thank you to the Walt Disney World Resort for hosting me! While my stay was complimentary, all opinions are authentic and my own.