Disembarking from a flight only to find that your treasured items are lost or damaged is one of the worst fears for any traveler. In fact, the fear that their wheelchair might get damaged is what stops many wheelchair users from flying at all! However, it’s a shame that this preoccupation over what can go wrong is stopping so many people from having the amazing adventures they deserve and dream of.

Yes, it’s a nuisance if your wheelchair gets damaged – but in many cases, it’s not nearly as bad as those nightmare scenarios that play in your head, especially if you know what to do in advance. First of all, the chances of something happening to your wheelchair in the first place are quite slim. For example, I’ve flown over a hundred times with my powered wheelchair and have only had two very minor mishaps so far.

And if by chance damages do occur, they won’t necessarily be as costly as many people think. If you notify the airline of the damage, they will pay to have your wheelchair fixed, since they are the ones who caused the problem. I got the airlines I flew to pay for the damages they caused to my chair both times – once my joystick knob was broken off, and another time my armrests were scuffed up.

So, let’s say that you do decide to fly and, unfortunately, your chair gets scuffed up or broken. What happens now? How do you get the airline to fix it? Read on for a step-by-step guide on what to do when the airline damages your wheelchair: 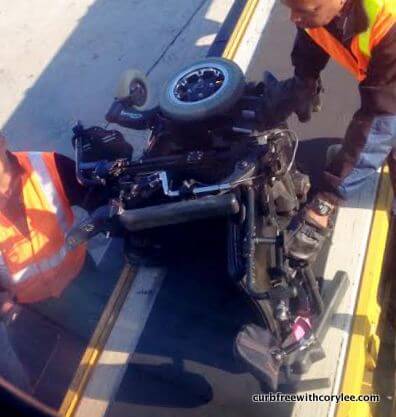 That’s my wheelchair being loaded in the plane once.

According to the Air Carrier Access Act of 1986 (or ACAA for short), it is the legal responsibility of airlines to fix or replace damaged mobility devices – regardless of the cost. The law is on our side, although it’s important to note that this act only covers flights within the U.S. or to-and-from the U.S. If you have any questions about the Act, or if you run into problems with an airline later on, you can call the U.S. Department of Transportation Disability Hotline at (800)-778-4838 with any inquiries. Save this number in your phone for easy access.

Like any customer service agent knows, when customers get angry or hysterical, it just gets in the way of solving the problem at hand. The more pleasant you are, the more pleasant your experience with the airline’s representatives will be. This means that even if you’re tired, upset, and angry – which you probably will be after a long flight on which your wheelchair got damaged – it’s best to stay firm yet cool, calm, and collected. The situation is only as stressful as you make it, so convince yourself that everything will be alright after a short chat with the airline, because chances are, it will be. 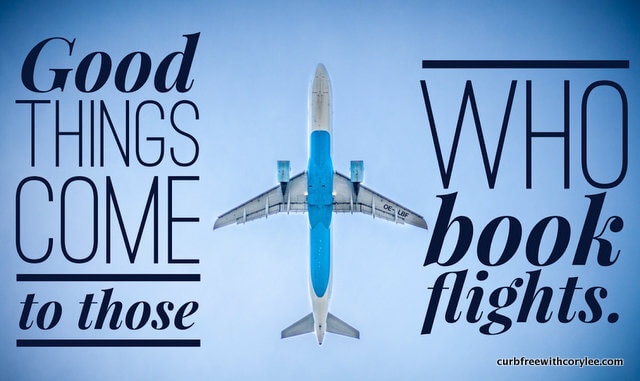 It’s important to take a picture of the damaged parts of your wheelchair as soon as possible. If the damage is not visible and for some reason the wheelchair suffered internal damage, use your phone to take a video to prove that your chair isn’t working correctly. If possible, make sure that the photo has a date and timestamp, so that the airline knows you took it right after your flight. Alternatively, you can find a spot in the airport to take the photo where the airline will be able to tell, via dates on screens, when it was taken. Include the documentation in the reports you’ll file later on.

Find a representative at your airline’s desk before you leave the airport. Since exact procedures may differ for each airline, it’s best to ask about airline-specific rules – though all airlines operating in the U.S. must subscribe to the ACAA. If the individual you find at first is unable to help you, ask to speak to the CRO, or Complaints Resolution Official. Each airline has a CRO on duty during airport operating hours, and this person is required to know the ACAA inside and out. Their purpose is to resolve any accessibility-related issues on the spot, and they will be able to guide you through the process of getting their specific airline to fix your wheelchair.
If it’s a small, quick fix that can be completed right then and there in the airport by airline staff, then many airlines will make the fix immediately. If you feel as though their fix was inadequate and they still didn’t compensate you fairly, you’ll need to file official complaints in order to take the matter further – but if you’re happy with the fix, then the matter is resolved! 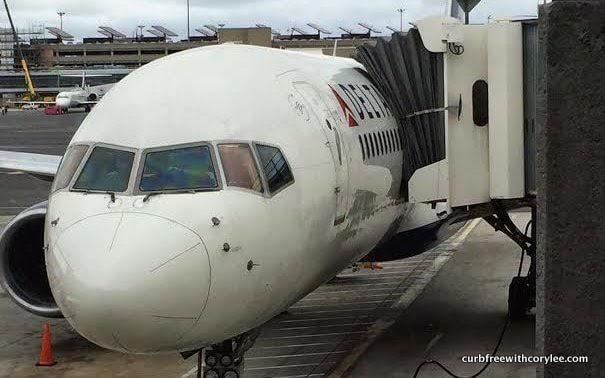 Step 5: File an Immediate Report (if you haven’t already during Step 4)

As I said in Step 4, it’s best to do this as soon as possible, while you’re still in the airport. Airlines and their CROs should be able to assist you with this, but make sure to ask them how long you have to file an initial incident report. For example, United Airlines says that it’s preferable to file an initial report with them immediately after your flight, as soon as you discover the damage. And if that’s not possible, their rules are that you must file a report within 24 hours for domestic flights and 7 days for international flights in order to be compensated. Ideally, you can file the report when you speak with the CRO.

According to Leah Smith from the Center for Disability Rights, an airline receives 100 informal complaints for every single formal complaint. These 99% of people who don’t ever make actual formal complaints probably don’t stand a chance at getting fairly compensated! So while it is essential to file an informal report immediately, ideally at the airport, be sure to follow up with a formal complaint.

First, send a formal, written complaint to the airline itself. Unlike the report referred to in Step 5, this written complaint is considered more formal and legally, airlines are bound to respond if you send one. However, make sure you stay on top of the issue. You don’t have to do this immediately – so if you were just starting your vacation, you can get your chair fixed and then enjoy your trip, forgetting about this until you come back. However, if you don’t postmark your complaint by at least 45 days after the incident, the airline is not required to respond. If you do meet this deadline, the airline is required to respond to you within 30 days. 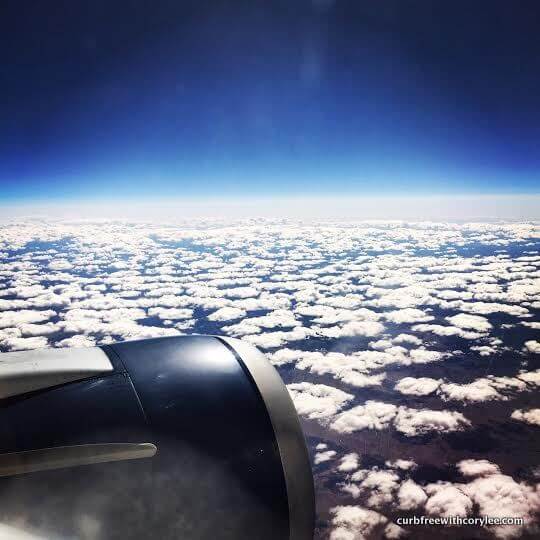 It’s also a good idea to then send a complaint to the U.S. Department of Transportation. If you run into problems with the airline, it’s good if the DOT has your complaint on record there as well. And in the majority of cases, where everything goes smoothly for those who adhere to the process, it’s still a good idea for the DOT to have a record of what happened to you. It’s these complaints that help influence future laws and policies, so make sure that your story is heard! You can file a complaint with the DOT.

In summation, yes – it can take a while for matters like wheelchairs being damaged by an airline to be resolved. However, because of the set process, it’s quite simple and straightforward if you know your rights and you remember the steps above. Additionally, the airline’s CRO and the DOT Disability Hotline are always there for you if you have specific questions, so you’re not in it alone, either. And perhaps the most important thing to remember is this: The quicker you act, the quicker you’ll see a resolution.